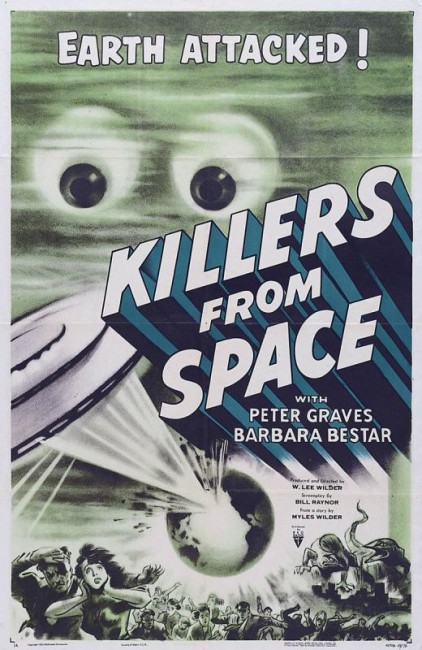 An A-bomb test detonation is conducted at Soledad Flats in Nevada. Afterwards, nuclear scientist Doug Martin flies over the test area to take readings, only for something to cause the plane to go down. The pilot is killed in the crash and Martin believed dead. Martin then inexplicably turns up alive again but with no memory of what happened and a mysterious surgical scar on his chest. He becomes obsessed with finding out when the next atomic bomb test is going to be held. The military become concerned about his mental health and take him off active duty. He breaks into a colleague’s office and steals the information about the tests. The FBI apprehends him as he tries to return to the crash site. Under a sodium pentothal injection, Martin reveals that following the plane crash he was revived from the dead by aliens from the planet Astron Delta. With their sun about to go nova, the aliens want to colonise the Earth. They are planning to harness the energy from the atomic bomb tests to create giant-size animals to wipe out humanity. Martin has been hypnotised and sent back to find when the next bomb test is to go off. The military regard Martin’s story as crazy. In remembering what happened, Martin realises there is a way to destroy the aliens and struggles to stop them.

Killers from Space is one of the first genuine B-budget alien invader cheapies of the 1950s. It was made by W. Lee Wilder, the lesser known older brother of the famous Billy Wilder, director of classics like Double Indemnity (1944), The Lost Weekend (1945), Sunset Blvd. (1950) and Some Like It Hot (1959). The brothers were immigrants from Europe but W(ilhelm) Lee Wilder’s career as a director never attained the fame of Billy’s.

W. Lee Wilder had made a handful of decent crime films in the 1940s but then formed the Planet Filmways production company, seeking to jump aboard the new 1950s SF boom. Throughout his career, Wilder was stuck down at the poverty row end of the spectrum where he made a number of science-fiction and horror cheapies including The Phantom from Space (1953), The Snow Creature (1954), Fright (1957), The Man Without a Body (1957), Bluebeard’s Ten Honeymoons (1960) and The Omegans (1969).

It also tries peculiarly to straddle both the alien invader and the atomic threat film, in particular the atomic monster movie that became all the fashion after The Beast from 20,000 Fathoms (1953), and also came out earlier the same year. Surprisingly, it is also a G-Man thriller of sorts for a while. In fact, the entire first half of the film seems to resemble more a 1940s crime thriller with FBI pursuing a suspect suspected of stealing atomic secrets, during which time there is nothing at all happening that classifies it as a science-fiction film.

In all regards, Killers from Space is routine. W. Lee Wilder generates almost nothing in the way of suspense during the chase sequences. The film loses credibility altogether once it introduces the ridiculous looking aliens in hooded boiler suits and with ping-pong ball eyes and shaggy eyebrows, looking for all the world like they are wearing mass-produced joke store masks. Wilder valiantly tries to obtain some effect by sinisterly underlighting them but the ludicrousness of their look sinks the film. He also tosses in a completely unconvincing array of optically enlarged lizards, mantises, beetles and spiders to represent the atomic monsters.