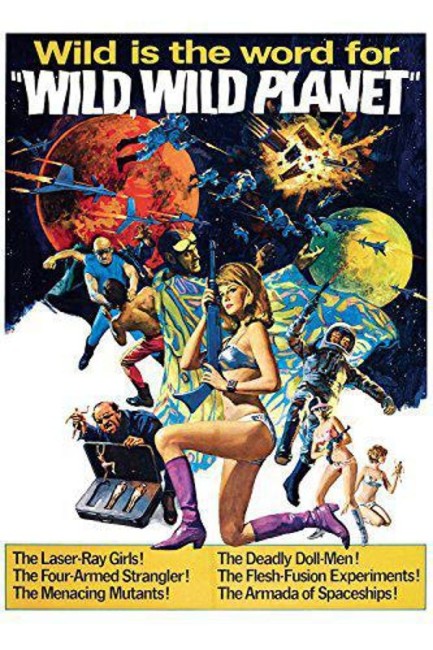 aka The Galaxy Criminals
(I Criminali Della Galassia)

Commander Mike Halstead of the United Democracies Space Command investigates the disappearances of a number of people on Earth. Dr Nurmi come aboard Mike’s command, the space station Gamma 1, to conduct experiments in miniaturised human organs. Nurmi seduces Mike’s girlfriend Lieutenant Connie Gomez away for a holiday to the planet Delphos. Mike’s investigation uncovers the crazed Nurmi’s scheme, using beautiful women and bald, four-armed zombies to abduct people by miniaturising them. Nurmi is intending to build a genetically perfect human race, as well as to graft one side of each his and Connie’s bodies’ together.

Italian director Antonio Margheriti, usually known under the Anglicised pseudonym of Anthony Dawson, was an extremely prolific director in genre cinema throughout the 1960s and 70s. Margheriti was best known for Gothic horror and giallo films like The Virgin of Nuremberg (1963), Castle of Blood (1964), The Long Hair of Death (1964), The Young, The Evil and the Savage (1968), Web of the Spider (1970) and Seven Dead in the Cat’s Eye (1973), although he worked in numerous other Italian exploitation genres. His other films include a handful of low-budget space operas, beginning with Assignment Outer Space (1960) and continuing with Battle of the Worlds (1961). Several of these space operas, beginning with The Wild, Wild Planet here and continuing through War of the Planets (1965), War Between the Planets (1966) and The Snow Devils (1967), are set around the same venue of the space station Gamma 1 and feature continuing characters. (See bottom of the page for a full list of Antonio Margheriti’s films).

The Wild, Wild Planet has a colourful bizarreness to it. It stirs an entertainingly schlocky B-movie plot – the principal threat consists of mini-skirted women with superhuman strength, accompanied by bald-headed heavies in dark sunglasses and black rainslickers that hide four sets of arms, who shrink people down to doll-size and then transport them in suitcases.

There is an earnestly naive charm to the primitive effects – all Flash Gordon rocket ships and flying cars cruising on wires between obvious model buildings – and sets that disguise their lack of budget with draped curtains. The film is made with an appealing 1960s modishness – there is a stab at creating a vision of an interstellar jetset society with people driving bubble cars and women in Euro-style mini-skirts and beehives. As the mad scientist of the show, Massimo Serato gives a wonderfully supercilious, slimy performance.

Despite tossing up such an outre and colourful plot, the way Antonio Margheriti allows it all to transpire on screen is pedestrian and dull. This wild skew of ideas gets lost in a murky plot. The story never deigns to make it clear how Dr Nurmi is intending to create his genetic master race and what exactly his mini-skirted super-woman and four-armed zombies have to do with it, nor why his master race seems to require people being shrunken to doll-size. Or for that matter exactly how his scheme to graft half his body with half that of the heroine will achieve this. The film seems trapped down at the level of a B detective-come-mad scientist film while never achieving the grandiose interstellar naivete and charm of a Flash Gordon serial that it initially briefly suggests it might.

The film, which was made under a title that translates as The Galaxy Criminals, appears to have been named The Wild, Wild Planet in US release in an effort to capitalise on the success of the gonzo Western/spy tv series The Wild, Wild West (1965-9).