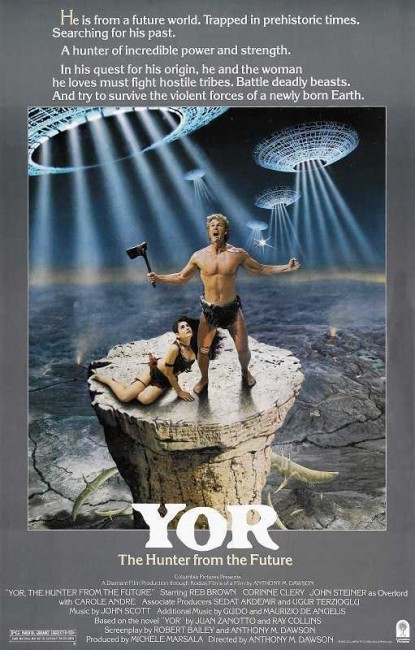 The blonde barbarian Yor comes to the aid of a peaceful tribe and drives away a horde of attacking primitives. Afterwards the beautiful Ka-Laa is attracted to Yor. She and her father Pag swear to follow Yor as he sets off in a quest for his origins. This takes them on a series of adventures through the lands of other tribes and primitives and up against prehistoric monsters. Finally they sail to a mysterious island ruled over by the sinister Overlord who holds the secrets of Yor’s origins and the civilisation that came before.

Yor, The Hunter from the Future is one of the films in the oeuvre of Antonio Margheriti, a hack Italian director from the 1950s up until his death in 2002. Margheriti dabbled in just about every Italian exploitation genre there is throughout his career, ranging from action films to the Italian space opera, the giallo film, peplum and several spaghetti Westerns. In most of his films, he was credited as Anthony M. Dawson, as part of the trend that began in the 1950s for Italian directors taking English-sounding pseudonyms to sell the films in the US. (See below for Antonio Margheriti’s other genre films).

Yor, The Hunter from the Future comes from the heyday of Italian science-fiction/fantasy cinema in the 1980s. It was regarded as a rather silly effort when it came out but in more recent years has taken on the reputation of a bad movie classic, even being revived at midnight screenings. It was a product of the Italian exploitation industry’s jumping aboard sf/fantasy trends of the 1980s – copying in particular Mad Max 2 (1981) and Conan the Barbarian (1982), of which Italian directors made literally dozens of cheap copies of either.

Yor starts out seeming as though it is a standard caveman film along the lines of One Million Years B.C. (1966) to which has been added a Conan-styled muscle builder hero saving beautiful women and fighting dinosaurs. Of course, everyone has seen Teenage Caveman (1958) and Planet of the Apes (1968) and from these the film has borrowed the main surprise twist where, after we start to see futuristic technology and then raybeams firing, we come to the realisation that we are in a post-holocaust future. In other words, what we have is a Teenage Caveman rejigged for the post-Conan/Mad Max era – although by this point said twist has become a cliche. (Even then, the film’s poster and very title has given away that we are in the midst of a science-fiction film).

When we finally arrive at the science-fiction sections, the film launches into cliches taken from Star Wars (1977). Or perhaps more so the Italian Star Wars copy – another sub-genre that was just as prolific around this period. In particular, Antonio Margheriti has reused  the costumes and props from The Humanoid (1979), a Star Wars copy for which he conducted the special effects. We get a plethora of androids and rayguns, as well as a standard evil lord in black cape. After this point though, none of the film makes much sense. The Overlord’s mad scheme seems to be the improbable idea of harvesting Yor’s blood to make a race of androids and something to do with him having been genetically perfected. These sections involve lots of laser beams shooting and androids exploding but not a whole lot of explanatory rationale.

There is also the cheap action of the Italian sword and sorcery film. The dinosaur effects look tatty. In one of the most unintentionally funny action scenes, Reb Brown shoots down a pterodactyl and then somehow manages to use its carcass as a makeshift hang-glider to fly in to attack a primitive camp. Everything is overrun by a disco score. One of the most hilarious camp aspects is how the film even opens with Yor’s own theme song – and how this gets repeated in the midst of various action scenes throughout.

Reb Brown was an American footballer turned actor who played in an inordinate number of bad movies of this period including The Howling II (1985), Space Mutiny (1988) and most notably as the title character in the tv movies Captain America (1979) and Captain America II (1979). Here smiling, blonde and outfitted in loincloth, his delivery is laughably flat. He looks exactly like the cliche of the jock who is all burly brawn and with only two brain cells to rub together. Mindedly, that is not entirely his problem as witness lines he is given to deliver such as “Am I a son of fire with no mother or father?” Lead actress Corinne Clery was a French model whose claim to fame was appearing as a Bond girl in Moonraker (1979).