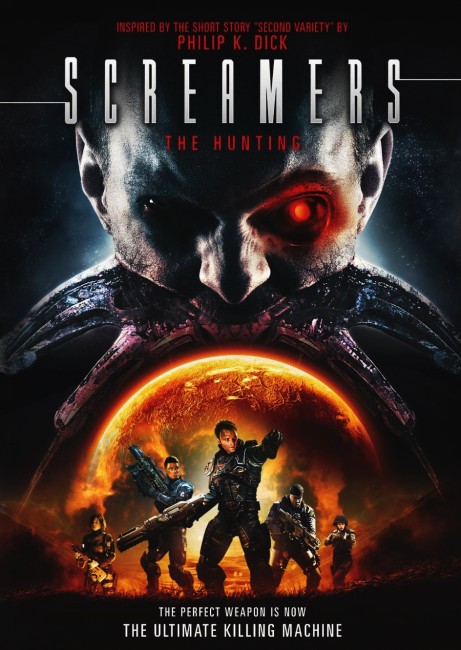 An emergency call is received from the former mining planet Sirius 6B where it is believed all human life is dead and the planet overrun by Screamers. The ship The Medusa is despatched from Earth with orders to rescue any survivors within the next ten days before a Class 10 Magellanic Storm hits and all life on the planet will be obliterated. Once there, the team rapidly come under attack by Screamers. The Screamers steal all the ship’s power, leaving them unable to lift off. In order to search for a new source of power cells, the crew must undergo a dangerous venture. They are forced to trust a handful of survivors they encounter but cannot be sure if any of them are not evolved Screamers.

Screamers (1995), adapted from a Philip K. Dick short story and with a script co-written by genre favourite Dan O’Bannon, was a modestly effective science-fiction film. It received a middling genre reception at the time it came out but is worthy of one’s time. This sequel, made fourteen years later, comes from the Canadian producers (Tom Berry and Stefan Wodoslawsky) behind the first film and has a script from Miguel Tejada-Flores, best known for writing Revenge of the Nerds (1984), (See below for Miguel Tejada-Flores’ other films).

I wanted to give Screamers: The Hunting some rope to prove itself. However, what has been delivered feels like no more than filler material destined for the Sci-Fi Channel (I’m sorry, I refuse to call it the Syfy Channel). In fact, it is hard to work out why Screamers: The Hunting has been made. It revisits the original setting only to do precisely nothing with it other than to run the new group of characters through a minute variation on what has gone before. The best parts of the original were the long and eerie journey across the planet, the venture into the complex in the middle and the Dick-ian sense of paranoia in not knowing who among the party was a Screamer.

Sheldon Wilson rarely captures any of that. There are some action scenes running around and shooting at survivors or Screamers, which are maintained at least at a competent level and with some okay effects – although there is nothing here that stands out above the general level of this type of direct-to-dvd material. Aside from one scene where the party encounters a group of imprisoned kids, there is disappointingly little in the way of paranoia about who among the party is a Screamer this time. The script also feels like it has to stretch connection to the original by lamely having heroine Gina Holden discover that she is the daughter of Peter Weller’s Colonel Hendrickson from the original.

One thing that Sheldon Wilson seems to be wanting to do is turn Screamers: The Hunting into more of a horror movie, where most of his other films sit. The Screamers seem construed more in terms of being horror movie creatures than they do androids with eyes that become black pools, their faces unfolding into a maw, spikes for some reason emerging out of their cheeks, and they producing miniature buzzsaws and claws out of their hands.

There is certainly much more of a gore emphasis in this version of Screamers with they gutting people, slicing victims’ heads in half or punching right through chests and stomachs. Another annoyance is having the Screamer-possessed suddenly turn into cliched evil characters, taunting the heroine or coming out with campy lines like “It’s evolution, baby.” The film’s twist ending [PLOT SPOILERS] with the heroine discovering she is pregnant with a Screamer baby is incredibly lame.

The cast have mostly been assembled from actors who spend their days earning wages on Canadian-shot US television series. Heroine Gina Holden, previously best known as Dale Arden in Sci-Fi’s Flash Gordon (2007-8), plays with a reasonable intelligence and conviction. The biggest name in the cast, Lance Henriksen, appears to have turned up for about two days worth of shooting and gives a solidly dependable performance as the creator of the Screamers.