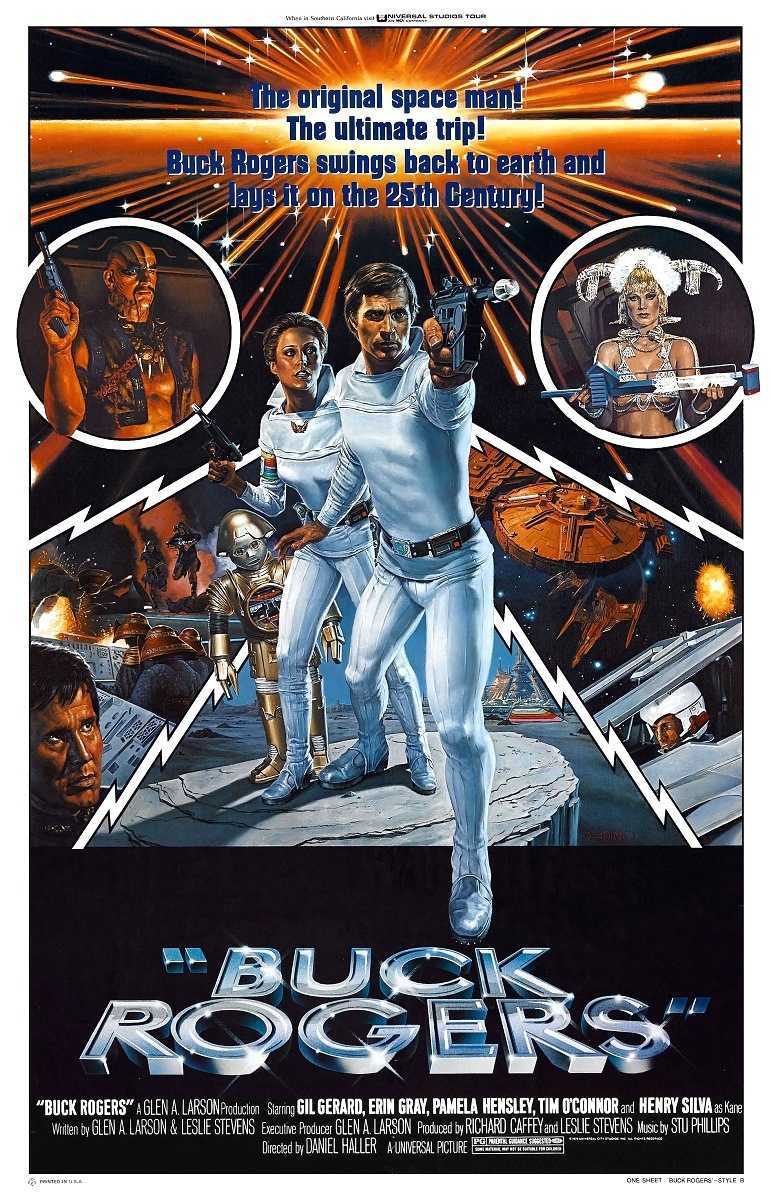 Astronaut William Buck Rogers is launched on a space shuttle mission but the shuttle is swept up by a passing comet, causing him to be frozen in suspended animation. 500 years later, the shuttle is found and Buck revived by a passing flagship of the Draconian Empire that is on its way to Earth to sign a treaty. Aboard, the seductive Princess Ardala takes a liking to Buck. He is released and sent on ahead to Earth. There he finds the only remnants of civilization to be survivors living in a domed city amid the post-holocaust ruins. However, when Buck tries to convince them that the Draconian treaty is a trap, he is treated with suspicion and disbelief.

Buck Rogers evolved out of two novellas, Armageddon 2419 A.D. (1928) and The Airlords of Han (1929), published in Amazing Stories by Phillip Francis Nowlan. These stories are a dull read today, caught halfway between space opera based on the style patented by E.E. ‘Doc’ Smith and an apalling racist fear of the Chinese (who are the villains of the piece rather than any alien races). The stories nevertheless served as the basis for the long-running Buck Rogers in the 25th Century syndicated daily newspaper comic-strip, which debuted later in 1929 and ran until 1967.

It is the comic-strip rather than Phillip Francis Nowlan’s original stories that is the basis of the image of Buck Rogers today – it is the gung-ho, flying helmet clad hero zipping around the solar system in finned rocketships that everyone has in mind when they talk about “that Buck Rogers stuff”. With the success of the trilogy of Flash Gordon serials starring Larry ‘Buster’ Crabbe, a serial of Buck Rogers (1939) was produced starring Crabbe and is one of the better science-fiction serials. There was also an all-but forgotten tv series Buck Rogers (1950-1), as well as a Buck Rogers radio show that ran from 1932 to 1947.

This Buck Rogers film was the flagship of a tv series revival Buck Rogers in the 25th Century (1979-1981) that emerged in the aftermath of the immense success of Star Wars (1977). There is considerable irony to this due to the fact that Star Wars evolved out of George Lucas’s initially wanting to make another Flash Gordon or Buck Rogers film. He found the rights too expensive to buy so ended up writing his own space opera. However, in the wake of the success of Star Wars, Lucas ended up having to face revivals of both Buck Rogers (here) and Flash Gordon (1980) – the campy Dino De Laurentiis remake – as his own imitators.

It is a shame that the Buck Rogers strip has been revived in an attempt to exploit Star Wars rather than with a nostalgic feel for the genre. Little remains of the original Buck – although one should hardly berate it for that as the original stories, the comic-book and the serial bear little in common with one another. Although, the film does return somewhat to the Yellow Peril racism that ran through the original stories, with the Draconians seemingly having been designed as Mongols.

The Buck Rogers film was made by producer Glen A. Larson. Larson had previously had success with the tv series Battlestar Galactica (1978-9). Battlestar Galactica was a shameless ripoff of Star Wars. No doubt due to its success, Universal promptly sought Glen A. Larson to produce their long-announced Buck Rogers remake. This film was initially intended as the pilot for the tv series, however Larson had had considerable success in releasing his Battlestar Galactica (1979) pilot theatrically and so extra money was put in to upgrade the film for cinema release. After its release, the film was reissued as the two-part pilot episode Aftermath, which is the same as the film version except for a new theme song, the redubbing of some of the more suggestively adult lines and the addition of several scenes in Buck’s apartment. (It has become a common misnomer among modern commentators, including the IMDB and The Encyclopedia of Science Fiction (1992), to assume that the film was always the pilot episode and was never screened theatrically prior to the premiere of the tv series).

Buck Rogers in the 25th Century is marginally a better film than the theatrically released Battlestar Galactica pilot. The shadow of Star Wars casts a heavy shadow over it at every point – cute robots that talk in bleeps, lookalike starships, a climactic WWII-type dogfight between small ships in space. While Battlestar Galactica‘s big screen outing enhanced what was seen on tv considerably, the same only seems to bring out Buck Rogers‘s limitations. The effects and ship shootouts are competently conducted, although the tv origins show through. The production values seem threadbare when it comes to the interiors of the Draconian ship. There are some visible glitches – boom-mikes in the corner of the screen or where one can see Pamela Hensley’s bodysuit in her supposedly nude bathing sequence.

However, it is the film’s attempts to be hip that ultimately derail it. Gil Gerard gives an irritably smug performance. The cute robots are dubbed with smartass lines like “I’m freezing my ball-bearings off” or looking on a bikini-clad Pamela Hensley “What a body”. Twiki’s “beedeebeedeebeedee”‘s become extremely grating within a very short space of time. There is a terribly dated scene where Buck introduces disco dancing to the uptight 25th Century, joined by Twiki who boogies his mechanical butt too. It isn’t funny, just smug and, in its treatment of its material, cynical. It is a film that wants you to laugh at how it is not taking things too seriously because it dubs the cute robots with crude one-liners or has Gil Gerard wisecracking at every point.

The people of the future are seen as having become so advanced, living in their antiseptic gilded domed city, that Buck becomes an injection of 20th Century knowhow – Buck is constantly referred to as a “real man”, the implication being that he is offering an injection of masculine virility that the 25th Century has been lacking. Buster Crabbe’s Buck Rogers was essentially a Western hero who conquers the frontier with his forthright certainty, his fists and a six-gun; on the other hand, Gil Gerard’s Buck Rogers is Buck as a 1970’s Real Man – it is not that hard to close one’s eyes and imagine the producers wanting to have cast Burt Reynolds in the part (or perhaps even more appropriately Roger Moore).

Certainly, the film is a model of restraint in comparison to some of the awful kitsch excesses the following tv series escalated to – as evidenced by episode titles such as Planet of the Slave Girls, Vegas in Space, Cosmic Whiz Kid, Escape from Wedded Bliss, Cruise Ship to the Stars, Space Rockers and Planet of the Amazon Woman. Episodes featured the likes of Buck being sold as a male slave, a spacegoing version of The Love Boat (1977-86) and intergalactic Olympics. The series lasted two seasons (37 episodes in total between 1979 and 1981), becoming marginally more serious in its second year, only to be dumped halfway through the season.

In 2009, a new cinematic version of Buck Rogers was announced, having been associated with directorial names such as comic-book artist Frank Miller and Paul W.S. Anderson. In 2010, a new version of Buck Rogers, Buck Rogers Returns began shooting under hack director Fred Olen Ray, although has yet to appear. This features Bobby Rice as the new, younger Buck and has the distinction of casting Gil Gerard and Erin Gray as his parents.