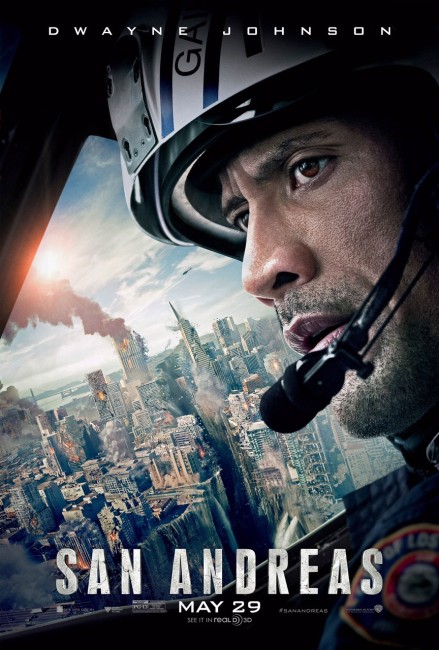 Ray Gaines is a helicopter pilot with the Los Angeles Fire Department. He just receives his divorce papers and learns that his wife Emma is moving in with architect Daniel Riddick. His teenage daughter Blake flies to San Francisco with Daniel as he goes to tend one of his buildings. At the same time, Professor Lawrence Haynes has devised a means of predicting earthquakes. He is witness as Hoover Dam collapses and interprets the data to realise that a big quake is about to strike on the San Andreas fault line. Ray manages to fly in and rescue Emma as the high-rise restaurant she is in collapses. As the quake hits San Francisco, Blake is trapped in a car in a collapsed carpark and abandoned there by Daniel. She is saved by cute British boy Ben Turner and his younger brother and they try to make it across the devastated city as Ray flies to their rescue. However, the rescue is hampered by afterquakes, collapsing buildings and a tsunami that swamps San Francisco.

From Godzilla films to Michael Bay’s Transformers series to the disaster movie cycle that began in the 1970s with hits like Airport (1970), The Poseidon Adventure (1972) and The Towering Inferno (1974), the big screen is in love with the spectacle of mass destruction. Indeed, the makers of disaster movies often seem like boys with a love of trainsets and fireworks going mad in taking the opportunity to blow up everything in sight on a grand scale.

The earthquake has sporadically been the focus of the disaster movie genre. The Big One striking the San Andreas Fault Line that every Angelite lives in fear of was touched upon by in one of the classic disaster movies Earthquake (1974), of which you feel that San Andreas could almost be using the same script with minor differences. Since then the San Andreas has featured in Superman (1978) where Lex Luthor planned to detonate a nuclear warhead on it and drop California into the Pacific Ocean and there was a similar plot in the James Bond film A View to a Kill (1985). The tv mini-series 10.5 (2004) and its sequel 10.5: Apocalypse (2006) also featured a massive San Andreas earthquake that actually turned most of California into a separate landmass.

San Andreas is a venture into mass destruction porn from Brad Peyton. Peyton had previously made banal content-free family formula fluff like Cats & Dogs: The Revenge of Kitty Galore (2009) and Journey 2: The Mysterious Island (2012), the latter of which also starred Dwayne Johnson, and subsequently the possession film Incarnate (2016) and the videogame adaptation Rampage (2018). The script (such as it is) is from Carlton Cuse, regarded as one of the better writers on tv’s Lost (2004-10) and other tv series such as the great The Adventures of Brisco County, Jr. (1993-4) and Nash Bridges (1996-2001), while he also created Bates Motel (2013-7), Tom Clancy’s Jack Ryan (2018- ) and Locke & Key (2020- ).

San Andreas is exactly the film that one expected it would be before sitting down to watch it. That is to say – it is loud, things get blown up and lots of large buildings fall down in an orgy of mass destruction, there are occasional cuts back to the dramas of various people caught in the disaster, while Dwayne Johnson is cast as a near-superheroic ordinary man who tackles the destruction face-on to save his daughter. The visual effects are expectedly stunning – entire buildings collapsing in extraordinary detail, a tsunami, cities on fire and flooded, dams exploding. The film feels like it is duty bound to offer up one such orgiastic display or dramatic set-piece every few minutes – be it Dwayne Johnson rescuing Alexandra Daddario from a drowning building; seat-edge helicopter rescues; a tsunami with the added effect of a toppling cargo container poised on their very tip and upturned ships being impelled through the streets of San Francisco. Some of the shots of cars teetering on cliff edges and people opening stairwell doors into empty space up the side of a building have an intensely vertiginous effect watching them in 3D.

I’ll leave the technical nit-picking here to people who are more geologically knowledgeable than me – suffice to say, it did seem rather absurd to me that you could have a tsunami hit San Francisco Bay when the epicentre of the quake was inland. To create a tsunami there needs to be underwater shockwaves travelling in towards land – the tsunami is created when the swell of waves hits shallow ground and the water crests into a wave – or else the water having bounced off the other side of a sea basin. (Given that this is the Pacific Ocean we are talking about, the nearest place to do so would be the wave travelling all the way to Japan and back). The other thing about tsunamis are that they are waves and like all waves they come in and then go back out. The film has much of inland San Francisco being flooded at least up several stories of a high-rise building – at a guess, at least a hundred feet. Firstly, there is not enough water that would be coming in to raise the overall sea level by more than a dozen feet and the second point is that, like any tide, the sea level doesn’t remain elevated, the tide goes back out again in fairly short course.

As epic-sized mass destruction goes, you could probably not get much better than San Andreas. That said, there is the other side of the coin. For me, it is a personal one. The city I called home for many years (Christchurch) was devastated by such an earthquake in 2011. A dear friend lost her life in a building collapse, relatives and other friends are still living in tents and caravans four years later because their homes have been flooded by mud or rendered unsafe. Many others – those that could afford to – have fled the city and those that remain live in an economically downcast ghost town. Government aid and the insurance industry seem to be dragging their feet in terms of helping these people rebuild their lives. It seems kind of hard going from something that has personally affected you to watching buildings falling down, waves flooding through the streets all prettily arranged for your edification. Another part of your brains kicks in and thinks “What about all the people we see that didn’t have a wannabe superhero father to rescue them … Or it’s really amazing watching an entire ship upended and crashing through the streets but what about the masses of crowds we see running along that would have been obliterated by that. Are they just faceless victims there as part of the spectacle?”

And that seems to be the way San Andreas wants to regard the disaster – we see a kid being rescued and Dwayne Johnson getting a handful of people to safety but all the other people are ancillary, the entire disaster seems arranged so that one man can bring his family back together and emerge stronger from the experience. We barely even see anybody killed throughout – just a property developer and Ioan Gruffudd who has been painted as a cowardly and thus is justified in being killed. The only other person I remember actually see being killed on screen is one person that Gruffudd shoves out of the way to seek shelter. We sit in safety in an air-conditioned theatre, eat popcorn and wow at the mass destruction; five days before the preview screening I caught, the people of Nepal were caught in an earthquake of 7.8 magnitude and the headlines are awash with human tragedy.

Compared to that, all that seems taken from the disaster here is the gleeful pornography of mass destruction and the faux drama of one man’s reconciliation and heroism. I mean if the disaster being depicted were 9/11, would people not find it perverse if all that the film was interested in was awe-inspiring images of buildings being hit by planes and collapsing, while the fact that so many people died has been completely edited out? It might be noted that despite the fact that a large percentage of San Andreas is set in San Francisco, which is the gay capital of the USA, there is not a single gay person in the film. It is as though the film has simply edited them out of its vision roo, along with anybody who is killed.

The film ends with Dwayne Johnson and family reunited, arms around each other as the sun sets across the ruins of the Golden Gate Bridge. The last line of the film is Carla Gugino asking Dwayne Johnson “So what now?” just as an American flag unfurls from the Golden Gate and he heroically stands tall to declare “We rebuild.” This makes San Andreas into another fable about rebuilding a shattered America. This is what we saw a bunch of films searching for in the few years after 9/11 – see the likes of War of the Worlds (2005), Diary of the Dead (2007), The Mist (2007), The Day the Earth Stood Still (2008) and 2012 (2009).

San Andreas ends up being far more simplistic than all of these and simply offers the unthinking patriotic appeal of a flag in the background as its answer. To rebuild sure but methinks, like the forgotten victims and a large sector of San Francisco’s population that the film simply seems to ignore, the film seems oblivious to the realities and that rebuilding might be a few steps further away than that. In reality, those that survive a disaster are numbed with loss and just want someone to help them. But then they’re another part of the disaster that the film seems to have conveniently written out.

(Winner for Best Special Effects at this site’s Best of 2015 Awards).