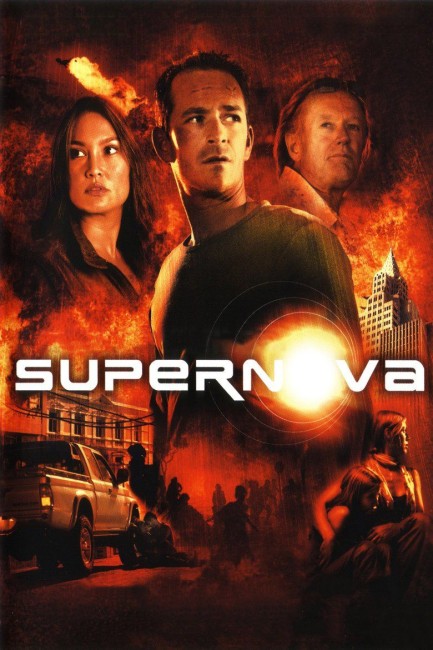 Astrophysicist Christopher Richardson arrives at work to find National Intelligence Organization agents there wanting to find why his superior Dr Austin Shepard has mysteriously vanished after sending self-destruct coded emails to five other astrophysicists. The NIO sends Christopher to talk to the recipients of Shepherd’s emails at a conference wearing a wire. When it is discovered that Shepard’s message contained calculations that show incontrovertible proof that the sun is about to go supernova, the NIO take all the scientists into custody. However, a solar explosion causes the helicopter carrying the scientists to go down. As eruptions of solar plasma destroy entire cities, Christopher is made prisoner by Colonel Harlan Williams who has taken the opportunity to activate the Phoenix Project where key personnel are taken to a secret underground city so that they can survive the destruction and rebuild in its aftermath. Abhorred at the idea, Christopher flees, trying to get back to his wife and daughter. Meanwhile, Christopher’s wife and daughter have become the prey of serial killer Grant Cole who has taken the opportunity presented by the mass devastation to escape from pending execution and fulfil his promise to kill the two of them.

Supernova – which is entirely unrelated to the spacegoing science-fiction film Supernova (2000), which was also a disaster of an entirely different kind to this Supernova – is a tv mini-series from Hallmark Entertainment. On the face of it, Supernova seems almost like a disaster movie version of The Day the Earth Caught Fire (1961) – a remake of which has been promised for a number of years – wherein nuclear explosions knocked the Earth out of orbit and caused it to start heating up. I was hopeful about Supernova after seeing the name of former George Romero associate John Harrison on the credits. John Harrison has made a number of modestly effective works, including directing Tales from the Darkside: The Movie (1990), writing-directing the tv mini-series adaptation of Dune (2000) and the Clive Barker adaptation Book of Blood (2009).

Alas, Supernova quickly falls into a host of disaster movie clichés. You can tick off the stock situations – the military crowded around the situation rooms, the scientists huddled over computers, the wife worried and vulnerable at home without her husband who is caught in the midst of the crisis, the reporter trying to get the big story out past official interference, the separated lovers. The series often seems driven by glued-on dramatic set-pieces – Tia Carrere pursuing the scientist as he jumps between roofs, the helicopter crash, the climactic fight.

The point that Supernova starts to move into interesting territory is when it comes to the introduction of the Phoenix Project, showing an entire underground city built by the US government in the eventuality of a disaster. Even here the mini-series screws it up and immediately diverts off into a silly action set-piece with Luke Perry trying to escape aboard a quad bike. Plus there is also some peculiar motivation around the Phoenix Project scenes – the government has a series of secret survival shelters in case of such an emergency, Luke Perry rebels against the notion because everybody is not included, but contrasted against the notion that everybody in the world gets to die, this seems somewhat foolish.

The main problem with Supernova is one of bad science. The trouble with the idea of the sun going supernova is that supernovae tend to occur towards the end of a star’s life, which is essentially billions of years into our sun’s future. Even were such the case, scientists would almost certainly have noticed the sun having travelled towards a super-collapsed state before then, not to mention the heavy bursts of neutrinos and massively swollen flaring of its size that always precede a star’s collapse. The other point might be that supernovae are only usually limited to stars about eight times larger than our sun.

Much worse is the subplot about the serial killer threatening Luke Perry’s wife and daughter. In the role of the serial killer, Philip Lenkowsky has been chosen for his sleazy, evil physical features. The character only exists as a stock nemesis ie. Cole has no motivation other than having made a promise to take revenge against Luke Perry’s wife and daughter, whereupon he escapes from Death Row for the express purpose of doing so – we are never told why them in particular and why this is such an overriding motivation on his part. The climactic confrontation with him has borrowed directly from Cape Fear (1962).

In the end, Supernova remains poorly plotted. Most of it seems like a handful of subplots in search of an overall structure, even a proper dramatic resolution. Tia Carrere breaks Luke Perry out of the Phoenix Project and they head on a cross-country journey for no particularly clear purpose; The Phoenix Project is painted as a bad thing but the drama concerning it is forgotten as soon as Luke Perry escapes; Emma Samms investigates the big story that is being covered up and spends the show struggling to get it out to the public before just deciding that sometimes you shouldn’t let the truth out. Although the worst piece of plotting in the entire mini-series is how the threat of solar flares devastating the Earth is built up into a world-destroying menace but then at the climax it is suddenly decided that the mathematical calculations were out and the threat dissipates just like that, as though recalibration of the mathematics can suddenly make a physical phenomenon disappear.

There are some not-very-special effects. These include some very unconvincing CGI shots of the destruction of St Louis, Sydney and the Taj Mahal. Most of the close-up destruction is represented by stock tv footage from real-life disasters.