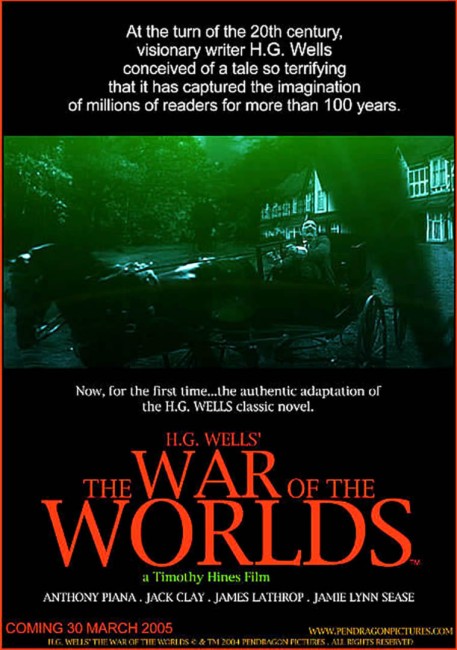 aka The Classic War of the Worlds

England at the end of the 19th Century. A writer visits his astronomer friend Ogilvy and is looking through his telescope when he observes several flashes of light being ejected from Mars’s surface. Several days later, a fireball comes crashing down on nearby Horsell Common. Ogilvy discovers a huge cylinder there and believes that he hears noises coming from inside. Crowds gather and then vast machines on tripod legs emerge, blasting the people and nearby buildings with a heat ray. All across the country, the Martian war machines emerge causing death and mass destruction with their heat rays. The writer struggles through the devastation, trying to reunite with his beloved wife again, as the Martian machines rout humanity.

The H.G. Wells novel The War of the Worlds (1898) is a science-fiction classic and was responsible for creating the alien invader genre. The War of the Worlds has had an uneven run on film. The classic version was the George Pal produced The War of the Worlds (1953), which updated the book’s setting to 1950s California and truncated Wells’s tripod war machines into flying machines. This was a classic in its own right and essentially created the cinematic alien invasion genre in the 1950s. This also led to a tv series revival War of the Worlds (1988-90) that was about alien body snatchers and bore almost no resemblance to the book (or the film).

Come 2005 however and we saw no less than three different versions of the book competing on screens. Leading the pack was the big-budget Steven Spielberg production War of the Worlds (2005) with Tom Cruise, which kept the tripod machines but updated the story to the present-day. There was also low-budget company The Asylum making their own contemporary version War of the Worlds (2005) with C. Thomas Howell, which was designed to exploit the publicity enjoyed by the Spielberg film, which led to a sequel War of the Worlds 2: The Next Wave (2008). A few years later there was also the interesting War of the Worlds: Goliath (2012), an animated film set in an alternate history 1914 with Steampunk mecha taking on the second Martian invasion, and The Great Martian War: 1913-1917 (2013), a mocumentary retelling that blends CGI tripod war machines with WWI film footage. 2019 saw a further resurgence of interest with The War of the Worlds (2019), a three-part BBC tv mini-series set during the Victorian period; and War of the Worlds (2019), an eight episode mini-series that relocates action to the contemporary European Union.

The most fascinating of these productions was this version from Seattle-based director Timothy Hines and his company Pendragon Pictures. Hines promised to do one thing that no other version of the story had attempted to do to date – film the book as it was written and to retain the Victorian England setting in which H.G. Wells was writing rather than take the easy route of updating it.

Hines had been working in the film industry for a number of years, although had only made one film previously with Bug Wars (2000). Hines had been fascinated with The War of the Worlds since a child and had for a number of years attempted to mount his own production. He was eventually granted a budget to conduct a modern version, only to see this curtailed following 9/11. Hines was eventually able to attract a budget around the $20 million range (although sceptics place that figure well down into the six figure range, with the IMDB even currently listing it as an improbable $5000). Shooting through most of 2003-4, the film was caught up in legal dispute with the Spielberg version but ended up being released directly to video/dvd less than a month before Spielberg’s film was. The Pendragon version exists in two different cuts – the original version released was just short of three hours long (179 minutes) but this was later cut down to a more commercial 136 minutes (seen here).

Timothy Hines’s The War of the Worlds is an amazing mix of the amateurish and massive ambition that goes waaaaaaaay beyond the resources that were clearly to hand (especially if the film was made on the unlikely budget of only $5000). The film almost deserves an Academy Award alone for its enormous effort in turning contemporary Seattle into Victorian England on next-to-no-budget. Everyone tries hard to appropriate the accents and get the period props right. The IMDB goofs section is awash with numerous historical and geographical inaccuracies but for the most part these would not be visible to anyone who has not studied the history of the era in detail.

The special effects are generally hit and miss, as much one as the other. The first appearance of the Martians from their cylinders with tentacles waggling comes with undeniably unworldly and eerie effect. The first appearance of the war machines – rising up out of the pit, tripedial as they should be, all in sleek chromium and accompanied by vast thumping sounds as they walk over the heads of the tiny people beneath them – are fabulous. The most accomplished scene is their attack on Waybridge with the machines striding across the landscape, outlined against the cathedral and with great images of them picking up and tossing people away or where one of them is hit and stumbles into the cathedral before falling into the water. The war machines were all marionette creations that were manipulated on rods by puppeteers, which is perhaps why they are some of the film’s most convincing effects.

While some scenes are a marvel of imagination and economy, others look cheap and amateurish. The appearances of the heat ray disappoint – the raygun rather absurdly looks like a wobbly cable tv dish, while there is no actual ray as such, just a rippling optical effect, although there are some undeniably cool effects of people being crisped to the skeleton. There are some extremely sub-par effects – the scene with the war machines blasting a train as it crosses a bridge, or where the Martians collect people in their baskets. The worst sequence is the attack on the warship Thunder Child, where the CGI effects of the Thunder Child and war machines striding through the water only look like the graphics for a low-resolution 1990s computer game. (Also in the same scene, the intercut scenes of the brother and two girls sitting on board the ferry come with back-projected footage of the water that looks like it is at a 45-degree angle to the ship).

The film is shot with the grainy cinematography of cheap video-era camerawork that makes the film a strain on the eyes. One annoyance was the score, which insists on crashing away with over-emphatic symphonic moment at all points, even when the characters are doing something mundane like walking across fields. There is a certain amateurishness on the part of the cast – all are non-professionals that do not appear to have any other film acting credits. That said, Anthony Piana as the eponymous writer has an undeniable leading man handsomeness and surety that could easily carry over to other film work.

The film is without a doubt faithful to the H.G. Wells story. Timothy Hines and co-writer Susan Goforth (who also plays the writer’s wife) have a reasonable ear for period dialogue that sounds convincing (even if it is unlikely that any real Britisher would be able to place some of the accents). I didn’t find the length boring – maybe one needed to see the full three-hour version for that to be the case. There is the odd scene that could have been trimmed – one with the hero’s brother engaged in a fistfight with three ruffians who attempt to have their way with the girls goes on far longer than it needs to. Nevertheless, I found what Timothy Hines was attempting to do an admirable endeavour. I would very much like to have seen what could have been achieved if he had been granted a bigger budget. As it is, The War of the Worlds is a marvel of amazing ambition, if not entirely of delivery.

Timothy Hines made a sequel War of the Worlds: The True Story (2018), a faux documentary that supposedly interviews the last survivor of the invasion. He followed this with a further period-set work, the non-fiction based 10 Days in a Madhouse (2015) and the non-genre comedy Charlie Boy (2021).