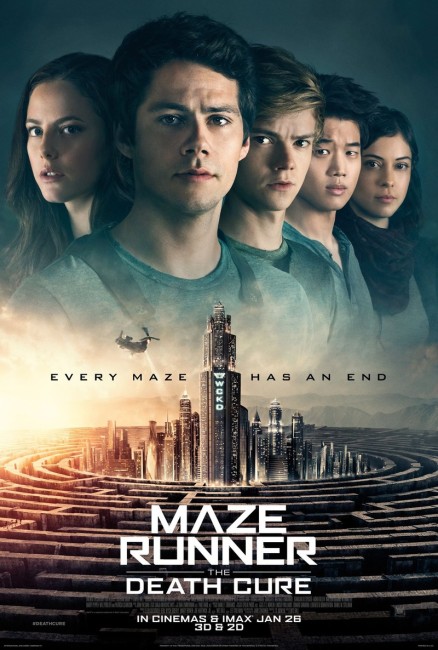 aka The Maze Runner: The Death Cure

Thomas and the freed Gladers join the Right Arm in conducting a raid on a train aboard which WKCD are transporting more immune children for experiments. Thomas is disappointed that Minho is not among the prisoners they free. He learns how Minho may be in The Last City where WKCD maintain their operational base. The Right Arm consider it too risky to mount an attack on the city so Thomas sets out on his own across the wasteland, joined by several others. Reaching the Last City’s fortified walls, they try to find a way in when Thomas encounters Gally, the former Glader he believed killed and is now part of a resistance that lives outside the walls. They agree to show him into the city but Thomas then realises that rescuing Minho means having to obtain the aid of Teresa who betrayed them.

The Maze Runner (2014) was a fairly decent Young Adult film, creating an puzzle story that expanded out into a Conceptual Breakthrough piece as the teen characters came to an understanding of the true nature of their maze world. The Maze Runner was based on what was then a trilogy of books by YA author James Dashner – later followed by a duo of prequels. The Maze Runner film was followed by The Scorch Trials (2015), which threw out most of the book and was a waste of time by all concerned. The third book The Death Cure (2011) forms the basis of the film here – so far no announcements has been made about filming the two prequels and one assumes that this is the end of the series. Certainly, the mid-range gross of this sequel – only $57 million domestic, down on the $81 million earned by The Scorch Trials – would suggest the market for any further films has tapered off.

A large part of the problem is that The Maze Runner sequels feel like a series of canned action scenes in search of a purpose (beyond being there to milk the same audience that came into the first film). The Maze Runner was a solid science-fiction piece – I could quibble about its weak ending but it worked fairly well. The main problem is that its end seemed like the natural conclusion of the story and everything that has come after that has felt unnecessary. Not to mention that after that point the series went from a Conceptual Breakthrough story to merely a series of by-the-numbers post-holocaust/evil dystopia action films.

As with The Scorch Trials, The Death Cure has basically thrown out all but a passing resemblance to the book. There seem only vague points of commonality – Thomas undergoing a quest to the city on a mission to save one of the group (Newt not Minho); the return of Gally leading a group of rebels; Thomas as the source of the titular cure. Everything else is wildly different – a major part of the film’s plot, for instance, is that Teresa has betrayed the Gladers and now works for WKCD but none of that happens in the book.

The Death Cure opens on a moderately spectacular sequence where the rebels raid a WKCD train, carting a carriage of children off by helicarrier amid much shooting and trainboard action. It starts the show off well but it is also a sequence where I felt utterly bored – there is no engagement with the characters in terms of fearing for their lives, just a series of action scenes aimed at the spectacular. In other words, why do we care why things are happening? – least of all when we are sitting through a series of set-pieces that feel just the same as several dozen other action films. Instead of any engagement, I promptly started nitpicking the improbabilities of the action – like how the rebels manage to bring the train to a halt or stop to face their pursuers at exactly the right place where others conveniently happen to be hiding in wait.

The rest of the film seems construed in terms of one of these canned action set-pieces at regular intervals – the group being pursued by Crank zombies through a tunnel, a scene that feels lifted from 28 Days Later (2002); Minho being pursued around a series of hallways by a biomehcanical Griever in a sequence that exists for no real reason – it’s simply part of a virtual test that WKCD are putting him through; the city guns firing on the rebels; a sequence where Dexter Darden saves a busload of freed kids from WKCD troops surrounding them by hauling the bus away on a crane (another rescue that is affected by the good guys’ highly improbable ability to have compatriots waiting in just the right place to save them). The last third of the film breaks out into open warfare in the streets of The Last City, which goes on and on amid much shooting, explosions and buildings collapsing. Why we should care what is happening is not something that seems to have factored into the thinking of those making the film.