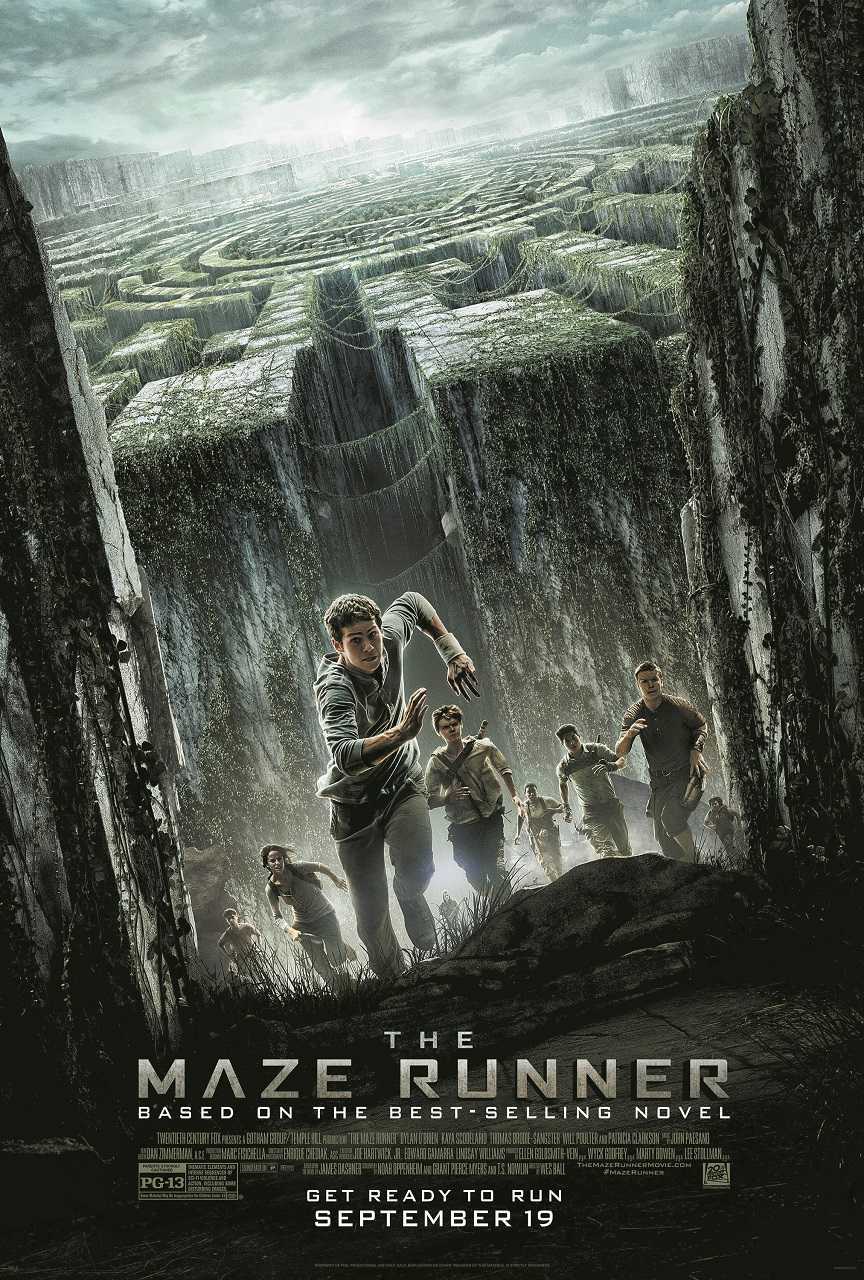 A teenager gains consciousness, emerging out of an elevator into an encampment of other boys. He has no memory, although some later starts to come back, including that his name is Thomas. The camp is surrounded by a vast maze. The gates to the maze open each day and lock at night and Thomas is warned that those who travel in after dark never return alive. Some of the group have been designated as Maze Runners with the assignment of mapping the area in search of an exit. When Alby, the boy who befriended him, enters the maze and returns injured just as the gates are about to close, Thomas runs in to help – only to be trapped inside for the night. There he faces off against a Griever, a ferocious part robotic, part organic machine and manages to defeat it. He becomes the first person to ever emerge from the maze in the morning. This serves to catalyse the group of boys who fight over whether they need to preserve the status quo or, as Thomas pushes, explore the maze with the newfound clues scavenged from the Griever. They are then startled when a girl Teresa emerges from the elevator. She gives Thomas further half-remembered clues about their shared pasts and the mystery of the maze. However, this also serves to precipitate the Greivers attacking the village to slaughter everybody.

Films adapted from Young Adult novels are all the in-thing. 2014 proved to be the year of the Young Adult dystopia. A couple of years ago we had the big hit of The Hunger Games (2012), which has spawned a series of sequels, and this was followed by other dystopian Young Adult works such as the inexplicably popular Divergent (2014), which became another YA series, and the flop of The Giver (2014), followed by The Maze Runner.

The film is adapted from The Maze Runner (2007) by American Young Adult writer James Dashner. The book was a modest hit and snapped up by producers looking for the next series to spin off as a potential lucrative Young Adult franchise. Dashner followed this with two book sequels, The Scorch Trials (2010) and The Death Cure (2011), which expand out on the nature of the world and the reasons behind the creation of the mazes, followed by two prequels The Kill Order (2012) and The Death Code (2016). The film represents the directorial debut of Wes Ball, previously a graphic artist and designer on various films.

The Maze Runner immediately captures one’s interest far more than any of the other Young Adult dystopian works. The difference is that the other aforementioned are simply appropriating well-worn dystopian tropes – so much so that the films quickly fall into genre cliches that simply have had standard Coming of Age stories/romances written across them. The intended youth audiences, not being familiar with the vast preceding body of work in dystopian fiction, lapped them up.

By contrast, The Maze Runner is more of a science-fiction conceptual puzzle film along the lines of works such as Solaris (1972), Cube (1997) or Dark City (1998) where the protagonists must work out the true nature of the world they are in with the stories culminating in their achieving a breakthrough in understanding. These films take great delight in constructing the strange rules their worlds operate by and giving us teasing hints as we try to piece them together.

In this sense, The Maze Runner creates an epic-sized mystery and classic images – the characters with amnesia and the world-sized puzzle to solve, the cryptic clues. Wes Ball creates solid drama out of this – especially intense are some of the scenes with Dylan O’Brien being pursued through the maze in a fight to the death with a deadly robotic spider. These do one thing that you never expect of a Young Adult film (at least based on any prior samplings of the genre) – generate effective seat-edge tension.

The failing of The Maze Runner is that it creates a great mystery and curiosity about solving the riddle only to produce underwhelming answers at the end. [PLOT SPOILERS] Here we learn that they are in a post-holocaust future where humanity has suffered from deadly mutations as a result of solar flares. Contrary to this are some children that have developed a resistance. In a piece of enormous improbability, the only means whereby this can be detected is by measuring their brainwaves in combat situations.

This naturally necessitates, rather than anything normal like running them through military boot camps or training simulations, the construction of vast mazes and killer robotic spiders to hunt them down. Quite how large numbers of them being randomly killed while unarmed up against a lethal giant robot spider is meant to measure individual survival skills and brainpower was something I failed to get out of the explanation.

Alas, with the answers to the mystery provided and The Maze Runner having proved to be a reasonable enough box-office success to warrant sequels, the following stories drop the conceptual mystery and slip into no more than standard Hunger Games-type dystopian scenarios.

Wes Ball and most of the cast returned with adaptations of the other two books in the series The Scorch Trials (2015) and The Death Cure (2018).