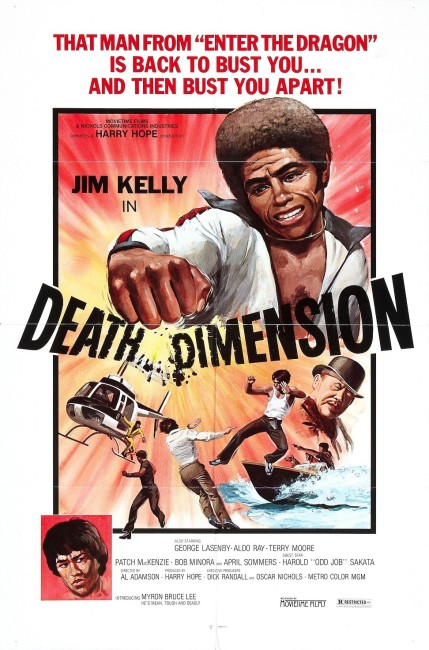 aka Freeze Bomb; The Kill Factor

The crime kingpin known as Joe ‘The Pig’ Santamacino has hired Dr Mason to develop a weather control device. Upon realising that The Pig is going to sell it to the highest bidder as a weapon rather than use it for its intended purpose, Mason implants a microfilm of the plans in his assistant Felicia Roberts and sends her to safety while he destroys his laboratory just before he is killed by The Pig. LAPD detective Ash is sent to investigate and ends up in the midst of the action as The Pig’s men do everything they can to find Felicia and obtain the microfilm.

Death Dimension is one of the films in the oeuvre of the legendary Al Adamson, a director whose output is often regarded as rivalling that of Edward D. Wood Jr. Throughout his career, Adamson made such films as Satan’s Sadists (1969), Blood of Dracula’s Castle (1969), Horror of the Blood Monsters/Vampire Men of the Lost Planet (1970), the Filipino mad scientist/monster movie Brain of Blood (1971), the notorious Dracula vs. Frankenstein (1971), Blood of Ghastly Horror (1972), Cinderella 2000 (1977), Nurse Sherri (1978) and Carnival Magic (1981), as well as co-directed Dr Dracula (1980).

Most of Al Adamson’s films play out as B monster and/or horror movies. Death Dimension has tended to be lumped in this same category. I know I did so for some time based on the science-fiction sounding title (which actually has nothing to do with anything that happens in the film) and plot elements involving weather control devices. The opening scene with scientist T.E. Forman implanting a chip under the skin of Patch McKenzie’s forehead seems like a standard mad scientist scene (although is then more mundanely explained as him having secreted a microfilm upon her person). In reality though, there is very little in Death Dimension that causes it to fall into being a science-fiction film. There is a single scene at the start where the weapon potential of the device is demonstrated that classifies as such; thereafter though, the weather bomb is something that only acts as the equivalent of a Hitchcockian McGuffin and the auctioning of it by Harold Sakata’s villain and the quest for the microfilm of its plans drives much of the plot.

In actuality, Death Dimension falls into what today we would label as an action film. The action film as a distinct genre label didn’t particularly exist back in 1978; rather Al Adamson seems to be sitting astride several different fads that later converged under the action film’s umbrella. Firstly, he seems to be jumping aboard the 1970s fad for Blaxploitation films, which emerged following the success of Shaft (1971). The Blaxploitation genre quickly evolved into a number of kick-ass variants that were often far more entertaining than their Caucasian equivalents. Jim Kelly, who developed a modest career in films after appearing in Bruce Lee’s influential Enter the Dragon (1973) and subsequent Blaxploitation works like Black Belt Jones (1974), Three the Hard Way (1974), Take a Hard Ride (1975) and Black Samurai (1977), is cast as a Shaft-styled detective hero. Kelly moves through the action scenes with a tough lethality that is far more impressive than today’s hyper-adrenalised shakycam action scenes. Just as equally, the film makes a beeline for the kung fu genre that had become widespread thanks to Enter the Dragon. To this extent, the film even features an Asian martial artist who bills himself as Myron Bruce Lee and joins Jim Kelly for a few fight scenes.

Equally, Al Adamson seems to be trying to be making a James Bond copy. The film was even sold with the tagline “The One Movie James Bond Himself Would Go See”. Adamson has cast various people that have some association with the Bond films. As Jim Kelly’s captain, there is George Lazenby, who was touted as Sean Connery’s replacement in On Her Majesty’s Secret Service (1969) and doomed himself to obscurity by quitting the series after just one film. The villain of the show is played by Harold Sakata whose one claim to fame was playing the most famous of all the Bond manservants, the deadly bowler hat wielding Oddjob in Goldfinger (1964). Sakata never had much of a career outside of that one role – notedly he bills himself here as Harold “Odd Job” Sakata. Furthermore, required to do more than be a tough monosyllabic presence, he reveals he is not much of an actor (let alone a villain) where even his voice has been dubbed by James Hong, making him talk with a thick cliche Asian accent. In the odd casting stakes, there is also B movie regular Aldo Ray, as well as Terry Moore, once the heroine of Mighty Joe Young (1949), who has been cast as a madame.

While most of Al Adamson’s films give the impression that they were cobbled together from odds and ends of other projects where financing had collapsed part way through, Death Dimension must be the most competent of his works (at least among those seen so far). It has a reasonably straightforward plot and doesn’t seem too much composed of random scenes awkwardly squeezed together – in other words, it feels like a film that has been plotted from A to B at the outset and fairly much filmed that way.

The film mostly consists of non-stop fight sequences and car chases, which are not too badly choreographed as 1970s action films go (although the standard 1970s chucka-chuck score does make the action monotonous). On the other hand, the action sequences are all there is to the film with little in the way of any plot between them. There is the odd amusing line:- “Malt liquor – the Black Man’s beer,” Jim Kelly reflects at one point, while the threat is made of one of the women – “One bite and he’ll make you flat chested.”