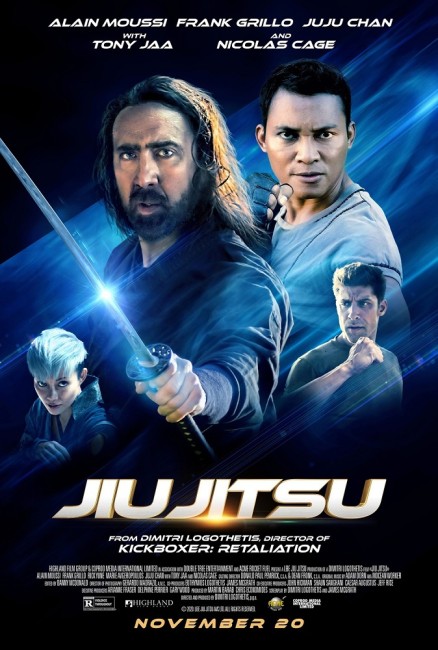 In Burma, a wounded Westerner is dragged out of the sea by a fisherman. The fisherman and his wife patch the man up and then deliver him to the nearby American military base. The man is interrogated by Maya but appears to have amnesia about who he is. The base is then invaded by a group of unarmed fighters who insist that the man is their leader Jake. Maya and a unit of soldiers agrees to accompany the team to investigate a nearby temple that is producing anomalous readings. There they are attacked by an alien creature. In the midst of this, Jake encounters Wylie who explains that Jake is the one chosen to lead the fight against The Brax, an alien being that emerges through a portal in the temple every seven years with the return of a comet. The Brax will fight seven combatants and then return home but if it is cheated of its fight will slaughter everything in the area.

The Action Film was a popular genre of the 1980s, 90s and 2000s but has largely died away in the 2010s. Outside of ongoing series that were established before 2010 – the various Fast and the Furious, Taken and James Bond franchises or works that draw on the genre’s past like The Expendables (2010) and Escape Plan (2013) – the original standalone action film seems to have died off apart from occasional exceptions like The Raid: Redemption (2011). Quite what the reason for this is one to which I have no clear answer – one theory might be the action film’s supplantation by the massive popularity of the superhero film.

Jiu Jitsu is a throwback to a certain type of action film. The very title Jiu Jitsu brings back associations with the Martial Arts Film (another genre that has largely died off in the 2000s) where Nicolas Cage is essentially cast in the role of the cranky sensei. The alien hunting the team of tough soldiers and fighters in the jungle brings back strong associations of Predator (1987), while the tournament with the fate of the Earth hanging in the balance comes from Mortal Kombat (1995). Both Rick Yune and Tony Jaa have appeared in the Fast and the Furious films from which this borrows that series’ idea of the action team assembled against the menace (even if the rest of the team members are hardly given anything to do).

Jiu Jitsu assembles the team, goes on location to Cyprus (standing in for Burma, which nobody seems to have informed the scriptwriters is called Myanmar these days and has been under a military dictatorship since the 1960s that would probably have more than a few objections to allowing a US military presence on its soil). There is a generic alien threat that pops up to do not much more than engage in some fights every few minutes. And that is about all there is to the film.

It is a rather deficient film on most counts. Much of the show has been construed around a series of fights and martial arts scenes. Dimitri Logothetis’s choreography of these is passable but nothing earth-shattering – there is no scene that ever leaves you floored or awed as to its ferocity or dexterity. The script often feels as though it is a set of cards shuffled about in between the action – the team come pre-assembled, no explanation of where from, they just turn up out of nowhere and attack the US soldiers then the fight scene is over and everyone abruptly decides to go and investigate the temple together; Alain Moussi has amnesia which is a convenient way to explain what is going on to us; Alain Moussi falls down a hole and just happens to encounter Nicolas Cage who explains his role as the Chosen One.

It is all very generic and nothing inspired. The one entertaining presence in the film is notorious over-actor Nicolas Cage who has been making some exceedingly strange, off-the-beaten-track and downright wacky career choices these days – see in particular films like Between Worlds (2018), Mandy (2018), Pig (2021), Prisoners of the Ghostland (2021Prisoners of the Ghostland (2021), Willy’s Wonderland (2021) and The Unbearable Weight of Massive Talent (2022). Here he rises to the occasion and plays the part with good old Nicolas Cage intensity, while out-acting all the bared muscles and torsos around him.