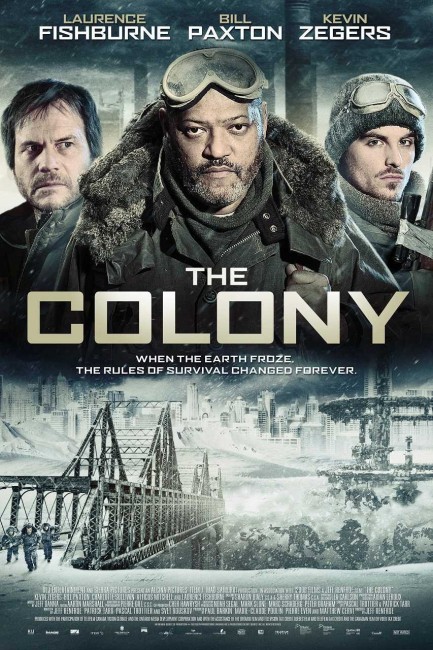 In the future, the Earth has been buried beneath a new Ice Age caused by global warming. Pockets of humanity sustain a precarious existence in tiny colonies. At Colony 7, people are banished when they develop colds out of fear that this could wipe out the remaining enclave, while others among the group push for them to be summarily executed. When an emergency call comes from Colony 5, the leader Briggs asks for volunteers to mount an expedition. He is joined by Sam and the young Graydon. They trek across the surface to Colony 5, finding it deserted except for one frightened survivor. They then encounter a group of cannibal savages that have slaughtered all the other residents of the colony. They flee from attack by the cannibals with Sam being the only one who survives to make it back alive to Colony 7. There he finds that command of the colony has been taken over by Mason who wants to enact a harsher regime and execute the infected. Amidst this, Sam has difficulty convincing the hard-headed Mason that the colony is about to come under imminent attack by hordes of crazed cannibals.

The title does nothing to inspire one – it is shared by some ten other films, including the previous The Colony (1995) with John Ritter in a nightmare gated community, even a reality tv series The Colony (2009-10) where contestants try to survive in a mock-up of a post-holocaust world. On the other hand, the premise of a frozen future where the world has descended into a new Ice Age as a result of global warming is a fresh and fascinating one. The Colony could almost be a sequel to The Day After Tomorrow (2004) – albeit minus the absurd happy ending. Or perhaps a variant on Robert Altman’s ultra-cryptic Quintet (1979), even if both films exist at opposite remove in terms of approach – arthouse obscuritanism vs an action film.

The film creates a fascinating world in the first few minutes – a group of survivors huddled around a base, trying to preserve remaining supplies while others are determined to execute those who have something as simple as a cold because they have the potential to wipe out the entire colony. It is for these reasons that I celebrated The Colony as a potentially strong and worthwhile science-fiction film with an original set-up. Certainly, the background of the film, created mostly in the digital effects department, filled with ice and snow wherever one looks, bar the remains of a handful of protruding buildings, looks fantastic.

Only The Colony then goes and blows it. It is almost as though all creative effort has been expended on the set-up and surroundings. Rather than a portrait of harsh survival in such a world, all that we get is an action film. After a mystery-laden journey across the frozen landscape and venture into the depths of the colony, we find that the threat disappointingly only consists of cannibal savages.

Here the film falls into the cliches created by Mad Max 2 (1981) – the community of decent and honest ordinary people trying to maintain civilised order amid the ruins at siege from a horde of wasteland crazies (who seem designed more like the sub-human mutants out of I Am Legend (2007) with a leader who even files his teeth down). The climax of both films consists of the crazies laying siege to and eventually overrunning the good guy’s base. While I was expecting a strong work about survival in this frozen future; all that we end up with is another post-holocaust action film about fighting off the wasteland crazies.

Jeff Renfroe’s handling of the action is competent but nothing that keeps you on the edge of the seat. Indeed, The Colony feels like it comes to an abrupt ending well before it should have. The set-up involves much about communication with the other colony and the discovery that someone there has found a way of reactivating the weather towers and clearing an area of land. We even get shots of said towers prominently featured in the background leading you to expect a miracle solution where they are put into action and the world restored. Instead the big climax of the film is the escape from Colony 7 as it is overrun by the cannibals and the fadeout with the handful of survivors now off to investigate the cleared area of land. It feels like half a story that comes to an abrupt halt – at its most charitable, perhaps one that is setting up things for a potential sequel.

Jeff Renfroe had previously co-directed the SF paranoia film One Point 0/Paranoia 1.0 (2004) set in a strange apartment and solo directed the non-genre thriller Civic Duty (2006), before moving into cable tv thrillers with Sand Serpents (2009), the psycho-thriller Stranger With My Face (2009) and the script for Seattle Super Storm (2012).