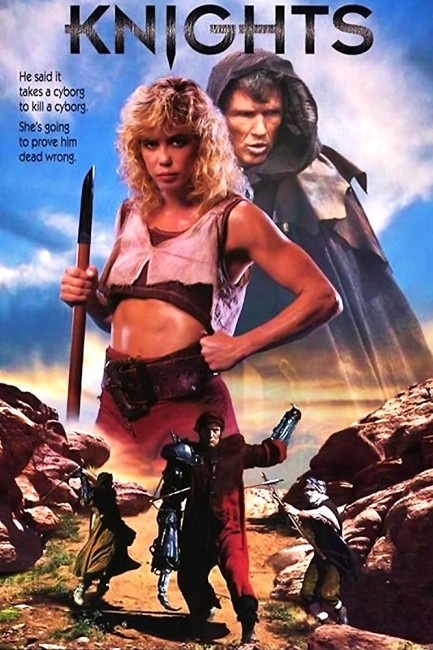 In the post-holocaust wasteland, the cyborg warlord Job needs to harvest the blood of 10,000 people and orders his army to capture people. The orphan Nea is the only survivor after the cyborgs slaughter the farming community that has adopted her. She is saved by the mysterious cyborg Gabriel who reveals he has been created to eliminate Job and the other cyborgs. Nea agrees to lead him to Job’s encampment if he will train her how to fight.

Knights was director Albert Pyun’s third venture into the low-budget post-holocaust cyborg action film. Pyun had previously made Cyborg (1989) and Nemesis (1993), and would later go onto make the likes of Heatseeker (1995), Omega Doom (1996) and three Nemesis sequels. (A list of Pyun’s other genre films is at the bottom of the page).

There was a time when Albert Pyun almost seemed to be shaping as a low-budget equivalent of George Romero and his zombie trilogy with a corresponding series of post-holocaust/Cyberpunk cyborg action films. However, this is a stretched comparison – where Romero used his zombies to make startling social metaphors, Pyun’s cyborg films are lacking in any of Romero’s dark brilliance. Cyborg was a brain-dead actioneer that consisted of an early Jean-Claude Van Damme, much action and little else, least of all in the way of a plot; the others improve on this little. Albert Pyun’s best film to date was Nemesis, which tempered his B-budget action with a reasonably intelligent Cyberpunk plot. Although the idea that Pyun’s cyborg films would ever attain the eminence of Romero’s Dead films is surely put paid to by the fact that Pyun doesn’t even seem to know the difference between a cyborg and an android. Indeed, Knights doesn’t even seem aware that it lacks any of the titular knights.

Knights, despite being made the same year as Albert Pyun’s best work Nemesis, is a step backwards from Nemesis‘s quality and more down around the level of the brainlessness of Cyborg. It has nothing that remotely resembles a plot – the film consists almost entirely of fight scenes. In fact, the last twenty minutes or so of the film consists of nothing except Kathy Long single-handedly taking on and fighting her way through several hundred men.

Undeniably, Kathy Long, a former stunt woman and five times world kickboxing champion, has some impressive moves but this hardly makes up for the lack of anything else in the film. Moreover, Kathy Long is a singularly uncharismatic heroine – she is short, has a ragamuffin scruffiness and no sex appeal whatsoever. It is like Sandahl Bergman or Cynthia Rothrock has been replaced by a street kid – one who had not even been cleaned up before being cast.

On the other hand, the surprise casting of Kris Kristofferson works well, with Kristofferson making a likeable android saviour, even though he and the character are not afforded much screen time. What Knights in its short running time could well have done with more of is the exploration of the relationship between Kris Kristofferson and Kathy Long. On the other hand, Lance Henriksen plays with all-stops-out campiness as the lead cyborg villain, a role he has called his ‘cyborg Richard III’. Annoyingly, the film stops abruptly with its climax being left open for a promised sequel that has so far failed to emerge.