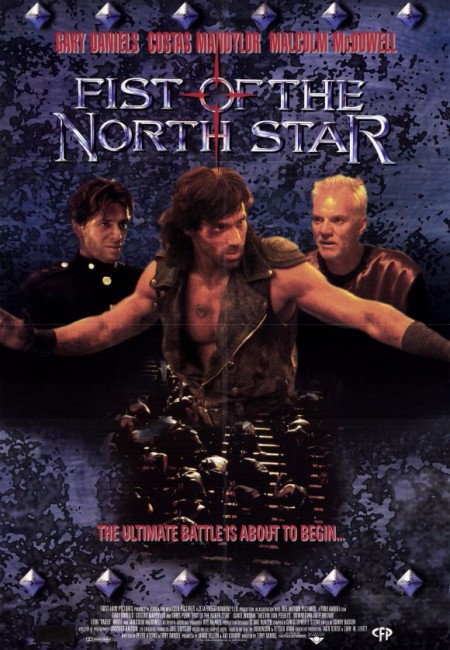 Fist of the North Star comes from Tony Randel (and his regular co-writer Pete Atkins). The two first made Hellbound: Hellraiser II (1988) and Tony Randel has since remained a steady but unremarkable genre hand with various films such as Children of the Night (1991), Amityville 1992: It’s About Time (1992), Ticks (1993), The Double Born (2008) and The Hybrids Family (2015).

Fist of the North Star never quite comes off. The problem is that Tony Randel is not sure what type of film he is making. He creates all manner of bizarrely over-the-top martial arts moves – combatants fire lightning bolts, opponents legs cross like clashing swords in mid air, Gary Daniels has a move involving finger tapping an opponent that causes their head to explode (Chris Penn wears a helmet throughout to delay the effect of one such explosion) and delivers kicks that dislocate an opponent’s jaw like a Size 15 shoe.

On the other hand these moves, which seem to be wanting to mutate into the wildly over-the-top acrobatics of a Hong Kong fantasy film, sit at odds with the realistic post-holocaust setting, which comes filled with grimly violent images of marauding gangs dragging burning victims through the shantytown behind vehicles and drowning people in barrels of water. The result feels like two distinctly different films that never mix in their approaches.

The film also suffers from bad miscasting. For one, it retains the Japanese names of the characters from the manga but then incongruously casts them with Caucasian faces. Hero Gary Daniels, a minor martial arts star, is a bland actor with no concept of the meaning of depth. On the other hand, Costas Mandylor, an actor who is usually all glowering romantic moodiness, is totally wrong when it comes to playing a larger-than-life supervillain.