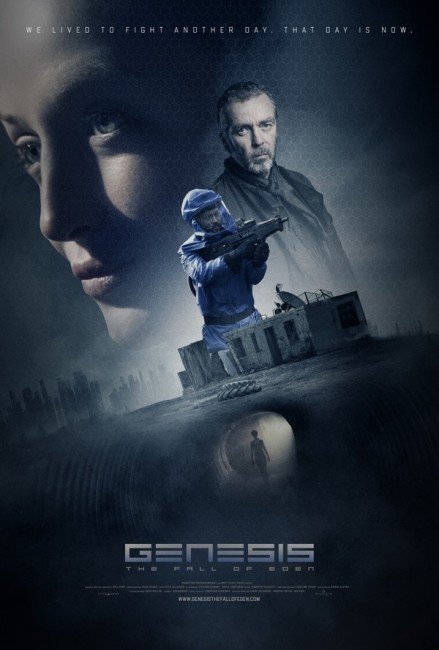 In the year 2042, a biological attack has wiped out most of the world. Several years later, a few hundred survivors try to sustain a life in the Eden shelter. There are rumblings of discontent among the citizenry about President James Pope’s handling of the situation. Paul Brooks believes he can mediate with Pope and maintain calm. Meanwhile, Pope places all hope on Dr Eve Gabriel and her perfecting the design of the Mark III android known as Abel that will be able to survive in the toxic wasteland outside. Abel has just gained self-awareness and intelligence. However, Abel abruptly goes outside and kills an Eden man who is out on sortie. Trouble ensues when the video feed from his attack is broadcast by the malcontents.

Genesis was the third film for the British directing team of Freddie Hutton-Mills and Bart Ruspoli. The two had previously made the horror films Cryptic (2014) and World War Dead: Rise of the Fallen (2014), as well as produced a couple of other films with the horror film Devil’s Playground (2010) and the non-genre prison film Screwed (2011).

Hutton-Mills and Ruspoli have ambitiously announced that Genesis will be the opening instalment of a trilogy. Firstly, I commend them on their ambition. And also for the fact that they have managed to assemble a reasonably professional budget and drawn in the internationally well-known name of John Hannah to headline, as well as other up and rising actors such as Olivia Grant, Ed Stoppard and Warren Brown.

On the other hand, all of this has been placed at the behest of an unoriginal film that does no more than rehash the basics of every post-apocalyptic adventure. Even then the film does not have the budget to go outside and most of the action takes place inside the survival shelter meaning that the majority of the film is centred around the in-politicking and the revolt of the masses. Added to this is another story about androids – one about the growth and development of an android that proceeds (for ill-explained reasons) to go amok and kill people. There is also a parallel plot where one character discovers that they have been an android all along that feels it has been rehashed from any of a dozen Philip K. Dick stories.

The sad truth about Genesis is that Hutton-Mills and Ruspoli fail to make a terribly interesting film. All of the elements – the post-apocalyptic scenario, the scenes with the androids, the in-politicking among the people in the shelter – are by the book. About the only major moment of interest is the scene in mid-film where one of the characters makes the discovery that they were an android too without ever being aware of it. Despite all of the competing and quite busy storylines, there is nothing for one to engage in.