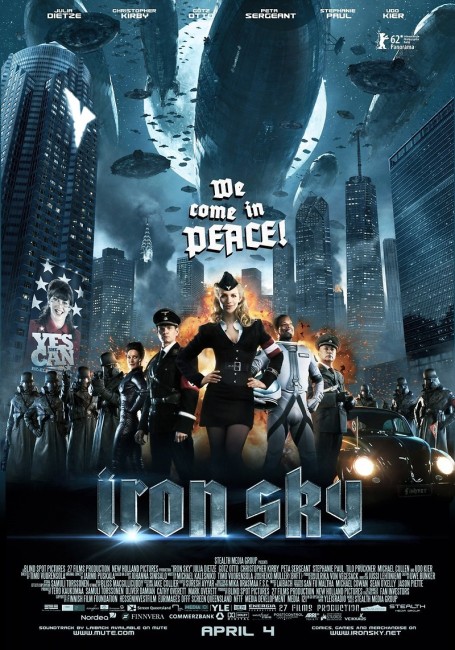 The year 2018. The US sends a new expedition to The Moon, landing on the dark side. The astronauts emerge and are startled to find a Nazi base there. Stormtroopers shoot one of the astronauts and blow up the lander, capturing the remaining astronaut James Washington. They are horrified to find that Washington is African-American. The Moon Führer Wolfgang Korztfleisch orders Washington to be interrogated about the presumed Earth invasion and his skin bleached white. Washington’s iPhone is taken as a computer to power the fleet of Nazi ships for the invasion of Earth. Klaus Adler, the ambitious deputy leader, goes on ahead down to Earth with Washington to talk to the US President. They are joined by Adler’s stowaway fiancee Renate Richter, the Moon’s schoolteacher. In their quest, they abduct PR person Vivian Wagner who appropriates Nazi speeches for the Presidential re-election campaign. Adler usurps Kortzfleisch and begins the invasion of Earth with the Nazi fleet of flying saucers. Washington has been rendered homeless but encounters Renate and shows her the reality of the Nazi ideology she believes. Together they set out to stop Adler’s invasion of Earth.

Iron Sky was the second feature film from Finnish director Timo Vuorensola. Vuorensola started in the 1990s making a series of fan shorts that parodied the various incarnations of Star Trek (1966-9) under the umbrella title of Star Wreck. This had its apotheosis with Star Wreck: In the Pirkinning (2005), a feature-length extension of the shorts, which was released free via the internet. This gained much word of mouth acclaim, especially for its special effects, which were on a level of quality that far rivalled those of professional effects studios. What was even more remarkable about these was that Vuorensola and friends produced the entire film inside their two-bedroom apartment, converting their home computers to produce the CGI – almost no exterior locations were shot for the film and every background was inserted via CGI.

Iron Sky was Timo Vuorensola’s follow-up to Star Wreck: In the Pirkinning. The original idea came from Star Wreck co-writer Jarmo Puskala after he had a dream of Nazi flying saucers. Vuorensola raised the funding for Iron Sky via crowdsourcing. In 2007, he created the now defunct Wreckamovie, which became a collaborative website where he and other filmmakers could connect with other fans from around the world and gain input into their projects, including donations and even script ideas. This allowed Vuorensola and producer Samuli Torssonen to obtain professional backing from several Finnish, German and Australian production companies. The greater budget allowed them the opportunity to film in Germany, Australia and New York City, blending these with their usual digitally inserted sets.

The film has a near perfect opening that juggles Vuorensola’s mix of outrageous premise, stunning effects and political satire with clever dexterity – wherein we see exquisitely beautiful shots as the lander goes into Moon orbit and makes a landing, before dropping its banners to reveal advertising for an upcoming presidential campaign. This is followed bt the astronauts’ discovery of a crater filled with a mining operation emblazoned with swastikas before a stormtrooper appears and shoots one of them in the head. This segues into the introduction of the beautifully detailed Nazi moonbase and Udo Kier as the Moon Führer, interspersed with scenes where Julia Dietze instructs children on the ideals of Nazism, including using a scene from Charlie Chaplin’s The Great Dictator (1940) wherein he dances with a globe of the Earth as proof that Chaplin was enamoured with the idea of the Führer symbolically holding the entire Earth in his hands. The juggle of concepts, satire and reversals of the familiar in these scenes is something that all good science-fiction should do.

Despite having only a budget of 7.5 million Euros, Iron Sky has the look and feel of a film made with thirty times that. As with Star Wreck, Timo Vuorensola and his producing partner Samuli Torssonen demonstrate that their forte is high quality visual effects. The ones produced here rival the work being produced by Industrial Light and Magic, Weta Workshop and other leading effects houses.

The scenes as we see a flotilla of swastika-emblazoned zeppelins going into Earth orbit dragging meteors behind them and then opening up to launch hundreds of flying saucers from their insides have a dazzling detail and clarity that makes you gasp. The battle scenes between Nazi UFOs, fighter jets, Earth ships and the launching of the massively armoured Gotterdammerung are spectacular. The scenes where the Gotterdammerung fires its missiles and blows an edge of the Moon up in a massive detonation or the final shot pulling back from the Moon to follow the tiny trails of nuclear missiles crossing the curve of the Earth are stunning shots.

Equally good is the production design with most of the sets being conducted virtually and digitally inserted behind the actors. Here the crew take their leaf from Sky Captain and the World of Tomorrow (2004) and create an exquisite retro-world based on 1930s era technology.

Timo Vuorensola also willingly engages in a good deal of political satire. Stephanie Paul’s US President is clearly intended as a caricature of Sarah Palin. Vuorensola has no time for Palin and her policies and one of the film’s most bitingly sardonic moments is when he has his Palin stand-in unwittingly adopt Nazi propaganda as part of her re-election campaign.

Where Timo Vuorensola is less certain is the arena of comedy and plot. Many of the characters in the film, particularly the depictions of the Americans, are broad caricatures and much of the political humour is loud and overstressed, frequently falling into slapstick. There are the times that the plot feels awkwardly stitched together – the scenes where the Nazi advance expedition end up becoming advisors to the Presidential re-election campaign are there because the film wants to make some political jabs and has contorted happenings aside to fit them in more so than they feel like they organically flow from a natural progression of the plot. The film also reaches a surprisingly downbeat ending.

Surprisingly, Iron Sky came out the same year as two other films also featuring Nazi flying saucers with Nazis at the Center of the Earth (2012) and The 25th Reich (2012).

Timo Vuorensola made a sequel with Iron Sky: The Coming Race (2019).

(Winner for Best Special Effects, Nominee for Best Production Design at this site’s Best of 2012 Awards).