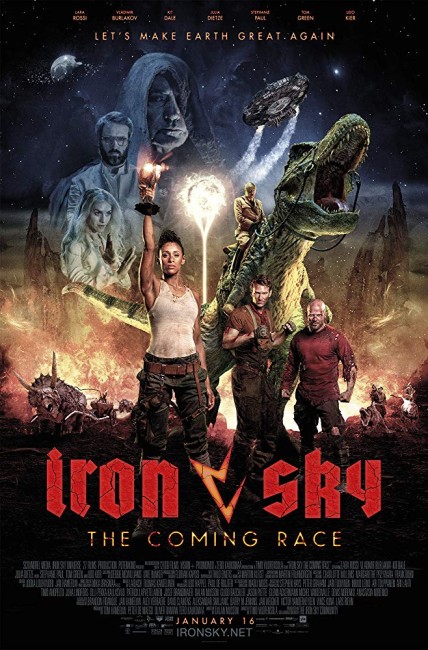 The year 2047. Following nuclear war on Earth, the survivors live on Neomenia, the former Nazi moonbase now ruled by Renate Richter, but the resources there are stretched thin. They are surprised by the arrival of a ramshackle spaceship from Russia built and flown by Sasha. Renate’s daughter Obi Washington finds the former Moon Fuhrer Wolfgang Kortzfleischer hidden aboard the ship. He reveals to her that he is of the Vril lizard species who landed on Earth back at the time of the dinosaurs. Unlike his people, he developed an interest in the apes before the Vril sought shelter at the hollow core of the Earth with the approach of the comet that obliterated the dinosaurs. He gives Obi a sample of the substance vrilia with which she is able to miraculously regenerate the ailing Renate. Kortzfleischer gives Obi directions to find more vrilia in order to save Neomenia. Appropriating Sasha’s ship and joined by Sasha and several of the Jobsists religious group, Obi makes a flight down to the hollow centre of the Earth. There she sets out to steal The Holy Grail, the energy core that powers the Vril civilisation there.

Finnish director Timo Vuorensola amazed the world with Star Wreck: In the Pirkinning (2005), a feature-length homage to the various incarnations of Star Trek (1966-9) that was released free to the internet, This gained much word of mouth acclaim, especially for its astonishing special effects that were produced by Vuorensola and friends on home computers in their two-bedroom apartment. From there, Vuorensola then made his first professional feature film with Iron Sky (2012), which gained a similar word of mouth build-up after Vuorensola created his own fan community to create a collaborative effort.

Iron Sky: The Coming Race was being prepared as long ago as 2012 when the first Iron Sky came out. The film has a 2015 copyright date, although was not released until 2019. This may well say something either about how Timo Vuorensola goes to painstaking effort with his effects or the difficulties obtaining completion financing and/or international distribution deals from Finland. Whatever the case, it made Iron Sky: The Coming Race a hotly anticipated film. The images released of Nazis riding dinosaurs at the centre of the Earth gave it a cultish appeal in the making – I have had people asking me about when it was coming out since 2016.

Eventually seen, Iron Sky: The Coming Race is a totally madcap mix – Vuorensola throws in a mix of ideas taken from lunatic conspiracy theorist David Icke who talks about shapeshifting alien lizard people (which he calls Archons) who have infiltrated the power elite of human society and are secretly controlling history. Icke does not talk about the Hollow Earth (although he does believe in a hollow Moon). Vuorensolsa has clear fun with this – as witness the flashback during Udo Kier’s explanation where we see the aliens arriving on earth during the time of the dinosaurs, his interest in apes he calls “Adam and Eve” and the Vril herding dinosaurs underground as the Chicxulub meteor arrives. By far the most entertainingly ridiculous aspect is the climactic scene where the Vril equivalent of Adolf Hitler (also Udo Kier) invades the moonbase on the back of a dinosaur roaring in subtitled German “Seig heil, motherfuckers.”

As in the first film, Timo Vuorensola has a broad hand when it comes to satire. There is a return appearance from Stephanie Paul as US President Sarah Palin (who is revealed to be a lizard person) – Vuorensola even throws in snide slogans about “Make Earth Great Again”, parodying the “Make America Great Again” slogan of Donald Trump’s 2016 election campaign. There is also cult religion on the moonbase, The Jobsists, based around worship of the iPhone – at one point, they are seen blowing up a devotee for jailbreaking their phone. Later in the film, we meet a lizard person version of Steve Jobs – he and the lizard Adolf Hitler get to eat the Jobsist devotees. Vuorensola also throws in a staging of Da Vinci’s The Last Supper with a line-up of alien lizard people made up of world bad people including Chairman Mao, Stalin, Osama bin Laden, Idi Amin, Kim Jong-un, Caligula, Vladimir Putin, The Pope, Margaret Thatcher and Mark Zuckerberg.

On the other hand, Iron Sky: The Coming Race is a mess of ideas that is all over the place without any unison. My feeling after watching three of his films is that Timo Vuorensola needs a better script editor (despite the fact that he was award-winning Finnish SF writer Johanna Sinisalo collaborating on script). His films feel like they come with pieces of humour and set-pieces that end up being included because he was amused by them and didn’t want to cut them. The Jobsists are a perfect example of this – they serve no real purpose in the plot other than Vuorensola wanting to satirise the cult of Steve Jobs.

Similarly, much of the first half of the film has so little to do with the Nazis on the Moon premise of the first film, you often wonder if you are watching some other film altogether. Even more so, the Hollow Earth premise is poorly integrated into the film and a big letdown – all it involves is a journey there, the Jobsists getting captured and eaten, Lara Rossi snatching a magic crystal McGuffin that is there solely to drive the plot, a dinosaur cart chase and then they all go back home again.

The biggest disappointment of Iron Sky: The Coming Race comes in the special effects department. In his previous films, Star Wreck and the first Iron Sky, these have been standout elements. In particular, the homemade effects of Star Wreck rivalled those of major studio releases coming out that year. Iron Sky expanded that with the aid of professional studios with stunning results that won the Best Effects award of 2012 from this site. By contrast here, the effects are expectedly good but rarely seem standout. There are no scenes that you remember afterwards like the flotilla of spacegoing zeppelins or the shearing off of chunks of the moon. Even the scene involving a dinosaur cart race and a jump across a ravine – reminiscent of Van Helsing (2004) – has its effect further diluted by being run over with comical music.