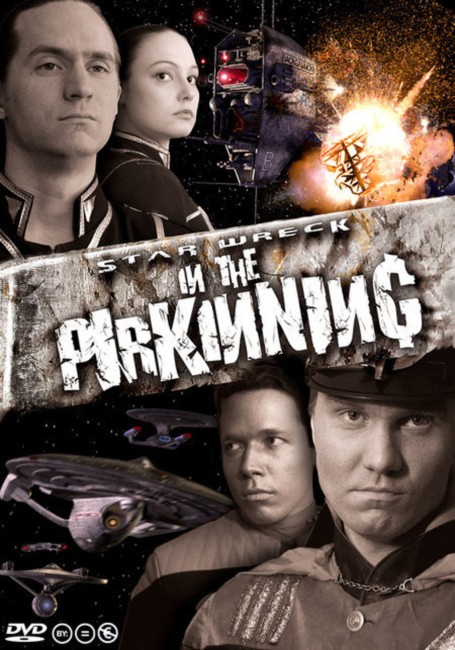 Three starfleet officers from the future, Captain Pirk, the Plingon known as Dwarf and the android Info have been stranded back in time in Finland on present-day Earth. Pirk mounts a plan to recapture their ship, which they sold to Russian nuclear scientists. With the help of the Russian scientists, they then build the starship Kickstart, which Pirk uses to conquer the Earth and have himself declared Emperor. A new, unknown type of spaceship appears through a maggothole. Pirk leads his new fleet of ships to go through the maggothole to investigate. They discover that they are in a parallel universe and encounter the space station Babel 13 under Captain Jonny Sherrypie. Pirk declares war on Babel 13 but soon finds that the station’s defences that are not as easy to defeat as they thought.

Star Wreck: In the Pirkinning joins a host of films that came out in the last few years spoofing Star Trek (1966-9) and its various incarnations and/or Star Trek fandom. Others in this mini-genre include the documentary Trekkies (1997) and its sequel Trekkies 2 (2004), Free Enterprise (1998), GalaxyQuest (1999), the German (T)Raumschiff Surprise – Periode 1 (2004), the Futurama episode Where No Fan Has Gone Before (2002), the tv series’ Starhyke (2009) and The Orville (2017– ). Although the phenomenon that Star Wreck: In the Pirkinning falls into is more that of the relatively recent one of the internet fan film – of original short films and parodies set in favourite fan universes such as Star Trek and in particular Star Wars. The Star Wars fan films have become so legion that we now have fan film festivals.

Though In the Pirkinning has an amazing expansiveness on screen, most of the film was shot in their two bedroom apartment. In fact, no sets were built for the film – instead the impressive bridge and space station sets were created virtually using actors who were filmed in front of a blue screen (which was in fact a piece of blue linoleum placed against a wall) and then digitally inserted. The group states that most of the seven years it took to make the film was taken up by the time it took to render the visual effects on their home computers.

The resulting film was distributed free via the internet – it is viewable at the link at the bottom of the page or at the group’s own website Starwreck. In the space of two months, some three million copies of Star Wreck: In the Pirkinning were downloaded, making it the most viewed Finnish-made film of all time. This in turn attracted a substantial amount of attention in international news.

Star Wreck: In the Pirkinning is construed as a parody largely of Star Trek: The Next Generation (1987-94) and of the muchly underrated science-fiction series . There are a great many witty fannish in-jokes aimed in Star Trek – in the opening shot, we see the Captain Kirk equivalent emerging from the bridge turbolift, only this turns out to be the bathroom and he has a train of toilet paper stuck to his shoe; in a long-running fan joke about Worf’s always having to stand on the Enterprise-D bridge, the Worf equivalent here enters the new starship bridge and grumbles: “Tactical’s still missing a chair”; while he later comes out with lines like “Plingon warriors do not take showers.”

In the Babylon 5 parodies, we get an analogue of the cryptic alien Ambassador Kosh who moves about in his robe with elongated head – and then in the background of one scene, we see the actor inside the suit removing the helmet to scratch his nose; Captain Sherrypie, the John Sheridan (Bruce Boxleitner) equivalent, is fond of making noble speeches before battle is about to commence with hilariously absurd effect – “We’re here to keep the peace, even if it means killing every sentient being in the galaxy”; and there are jokes about Commander Ivanovitsa and her obsession with parking regulations. Many of the jokes are apparently a lot funnier, as well as contain a number of local references, when one sees the film in the original Finnish.

What impresses most about Star Wreck: In the Pirkinning are the special effects. Though produced by a group of friends funding the film themselves and working in their own living room, these are easily on a quality that compete with some of the top multi-million dollar budgeted Hollywood science-fiction films. One need merely look at George Lucas’s Star Wars Episode III: Revenge of the Sith (2005), which came out the same year, and Star Wreck: In the Pirkinning can easily stand alongside it, one might even argue has a far better command of its sense of wonder and dramatically staging the effects than Revenge of the Sith did.

Samuli Torssonen and his crew stage some breathtaking shots – of the Kickstart in drydock, which is modelled just like the drydock in Star Trek – The Motion Picture (1979), launching, lifting off from the ground and heading into orbit; or the newsreel sequence, which is a superb combination of digital effects and historical film footage that has all been merged in sepia tone. There is a beautiful final shot that pulls back from the three central characters stranded in the middle of a frozen wilderness and keeps on moving back until the camera ends up in orbit around the Earth. Most of all what impresses are the space battle sequences that take up nearly the last third of the film. Timo Vuorensola, Samuli Torssonen and crew stage these for the sheer love and beauty of seeing space battles and the results are dazzling. The film also does a superb job in its replications of the sets, the ships and costumes of both Star Trek and Babylon 5.

On the minus side, were you to take away the space battle and special effects scenes, Star Wreck: In the Pirkinning would only seem like an ordinary fan film with some cute fannish jokes. The special effects are allowed to dominate the film – not too surprising as the effects are easily the film’s one standout virtue – and there are probably a few too many space battle sequences. One would maybe have liked to have seen a little more emphasis on plot – like what the characters are doing in the past or why they sold their ship to the Russians. (Apparently all of this is explained by reference to the earlier Star Wreck shorts, however in that the three million plus people downloading In the Pirkinning would not have seem these, it feels like one has started watching a tv serial with the second episode). The characters, especially the role of the Captain Kirk equivalent played by Samuli Torssonen, tend towards a certain manic eye-rolling buffoonery.

Timo Vuorensola next went onto direct a far more professionally backed production with Iron Sky (2012) about an invasion of Nazi flying saucers from the Moon and its sequel Iron Sky: The Coming Race (2019). He then ventured to Hollywood fare with Jeepers Creepers: Reborn (2022).