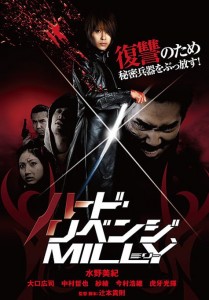 In the year 20XX, Japan has been rendered a mostly desert wasteland. Milly seeks out the retired swordmaster Jubei to ask his help. She is on the revenge trail against the Jack Gang who killed her husband and child and left her for dead. With her arms and legs rebuilt with sword and shotgun attachments, she now sets out into a bloody confrontation with the members of the Jack Gang.

Hard Revenge, Milly reigns in at only 44-minute long. It was the solo directorial debut for Takanori Tsujimoto who had previously made an episode of the anthology The Women of Fast Food (2007). The following year Tsujimoto was given the budget to expand the film to feature length with Hard Revenge, Milly: Bloody Battle (2009), which acts as a direct sequel and features a return performance from Miki Mizuno, as well as Mitsuki Koga, this film’s villain who is recast as the eccentric doctor who patches up Milly’s cyborg parts. Subsequent to Hard Revenge, Milly, Tsujimoto directed an episode of the Mamoru Oshii anthology Kill (2008), the feature-length vampire/martial arts film Red Tears/Monster Killer (2011), the action film Bushido Man (2013) and the anime Resident Evil: Vendatta (2017).

Though the budget is clearly limited, Tsujimoto evokes something of the hard-edge of a Sergio Leone Western. That and a near future that seems slightly more collapsed than the world of Mad Max (1979) but not quite as gone as the post-civilisation future of Mad Max 2 (1981). The basic plot of the lone gun-person on the revenge trail is one that has served a great many Westerns (and an equal number of post-holocaust films). Tsujimoto may well have drawn inspiration from Takashi Miike’s Full Metal Yakuza (1997), which similarly had a plot about someone gaining cyborg attachments and using their newfound abilities to go on a blood-drenched revenge trail. That said, Tsujimoto is not too interested in sketching out the background of his future in any more than the minimum amount of detail he needs to get us to the action scenes.

For fairly much a novice director, Takanori Tsujimoto directs with a good deal of confidence and assurance. He gives the characters a hard-bitten edge, which is more of a focus than you usually get in the rest of the gonzo Japanese splatter films. There is an appealing opening scene set in a shack bar with Miki Mizuno entering to ask swordsmith Hiroshi Oguchi’s advice – this follows the standard scene from a spaghetti Western where a stranger enters a bar but is undercut by touches that makes you do a double-take like where he asks her if she wants any shotgun shells for her leg and we see her seemingly put them in her pocket and then quickly arching her leg followed by the standard ratcheting sound of a shotgun shell being pumped into its chamber. The film also has a decidedly sardonic sense of humour – like when Miki Mizuno takes one gang member’s severed hand and carries it with her for several scenes and then a little later the rest of the gang find it propped up on the stairwell with the middle finger extended towards them.

Of course, Tsujimoto has only been waiting for the chance to get to the action. As per are all the scenes beloved of the gonzo Japanese splatter film, he delivers an entertainingly gory bloodbath – Miki Mizuno launching into action with a samurai sword that pops out of her wrist, with people being stabbed and erupting in massive jets of arterial spray that drench the camera. One gang member has their head severed and the rest of the body is left staggering about spraying blood while firing a gun. Miki Mizuno takes on Saaya in a toilet and blasts a hole right through her with her leg shotgun.

The showcapper of the film is the ten minute extended fight between Miki Mizuno and Mitsuki Koga. This comes with an energy and exciting toughness to it that Tsujimoto seemed to mostly miss when it came to the longer and better-budgeted sequel. Tsujimoto throws in some wonderfully entertaining moves – knives hidden in teddy bears, Koga being blown away by Miki Mizuno kneeing him in the stomach and then blowing a hole through him with her shotgun. The most entertaining and hilarious effect is the scene shown in silhouette where he tears open her top only for her to produce a series of whirring blades attachments from her chest that slice him to piece and then transform into blowtorches to barbeque the remains.

One must also take issue with the title Hard Revenge, Milly. The bizarrely grammatically placed comma is the way the title is spelt in English on the opening credits – ‘hard revenge’ is the adjective phrase and ‘Milly’ the personal noun so should not be accompanied by a comma unless at the end of a sentence such as “it was the person who sought hard revenge, Milly herself” – it’s like trying to say ‘Mad, Max’. (Sorry grammar Nazi rant over).