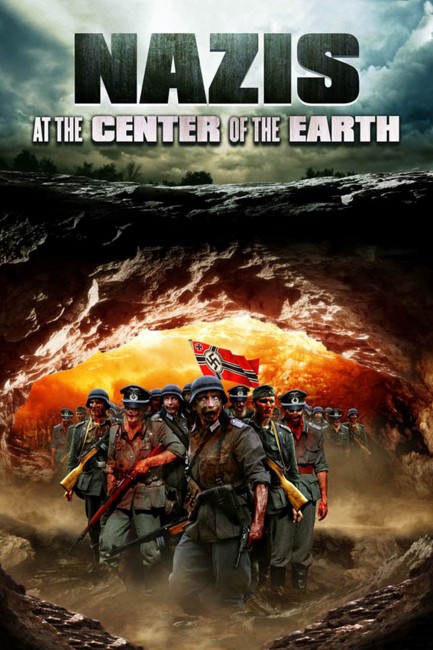 Two scientists taking samples in the Antarctic uncover a crashed Nazi plane. They are then made prisoner by Nazi stormtroopers and taken away to be subjected to experiments by the infamous Dr Josef Mengele. Their colleagues from the nearby Neflheim research station come searching for them and discover a chasm that goes deep underground. This leads them to an entire world underneath the ice cap that has tropical temperatures. They are captured, only to discover that their group’s leader Dr Adrian Reistad is in cahoots with the Nazis and has betrayed them. The Nazis have developed highly advanced scientific discoveries, including rayguns, weaponry and skin grafting techniques that has allowed them to prolong their lives. Mengele and Reistad now succeed in reviving Adolf Hitler whose head has been attached to a robot body. Under the command of the cyborg Fuhrer, the Nazis emerge from beneath the icecap in a UFO of their own construction and set about to conquer the world.

Just as popular as The Asylum’s mockbusters was the fad they created for low-budget CGI monster movies with titles that seemed to defy audiences to take them seriously beginning with Mega Shark vs Giant Octopus (2009) and continuing through the likes of Mega Python vs. Gatoroid (2011), 2-Headed Shark Attack (2012) and Sharknado (2013), most of which have produced multiple sequels. Amid these, Nazis at the Center of the Earth is one of the most entertainingly preposterous titles that The Asylum have managed to come up with so far.

Nazis at the Center of the Earth seems to have been construed as a mockbuster take on Timo Vuorensola’s Iron Sky (2012), which featured invasion by Nazi flying saucers hidden on the Moon. (The same year also saw another Nazi flying saucer film with The 25th Reich (2012) from Australia). Both films hold a lineage to a spate of Nazi mad scientist films that go back to the 1960s with the likes of The Flesh Eaters (1964), They Saved Hitler’s Brain (1964), The Frozen Dead (1966) and Flesh Feast (1970). Indeed, the very prominence of Auschwitz doctor Josef Mengele as a villain surviving into the present-day and trying to revive the Fuhrer is blatantly borrowed from the big-budget Nazi cloning film The Boys From Brazil (1978). (For a more detailed overview of the depiction of Nazis in genre material see Nazis in Fantastic Cinema).

The presence of zombies in stormtrooper uniform goes back to a spate of Nazi zombie films that began with Shock Waves (1977) and includes the likes of Oasis of the Zombies (1981), Zombies Lake (1981), Night of the Zombies (1981), Outpost (2007) and Dead Snow (2009). Surprisingly, the idea of the Nazis having built a base in a Hollow Earth – something called a Symmes Hole after its 19th Century proponent John Cleves Symmes Jr – has some basis in fact with the esoteric Nazi dominated Thule Society having been fascinated with the topic and reference to bases there even having turned up in a speech by Admiral Karl Donitz.

From its opening moments, the credibility of Nazis at the Center of the Earth wavers down around the level of most of The Asylum’s cut-price films. For one, there is Dominique Swain, an actress who briefly hovered around being a name around 2000 but vanished into nothing roles, and Jake Busey, an actor who gives every indication of following in the bad acting footsteps of his father Gary, playing scientists. The two actors, especially Jake Busey, seem to have difficulty maintaining straight faces – especially when Busey is required to join in and give a “Heil Hitler” salute and his expression seems to be one of barely disguised contempt for the show he is in.

The scene that was of considerable amusement to me as a former New Zealander is the laughably mangled attempt at nailing a New Zealand accent that the two RNZAF pilots make during their flyby encounter with the Nazi UFO towards the end of the film. The early scenes also suffer from The Asylum’s typically cheap effects – the film’s director Joseph J. Lawson has acted as a supervisor on a number of their films – notably a somewhat unconvincing snowcat. That said, Joseph J. Lawson does get it together in many of the other scenes and produces some fine effects shots with the UFO in flight, of the Hollow Earth and some generally competent ones with the robot Hitler, which are well above average for The Asylum.

Nazis at the Center of the Earth becomes immensely entertaining once it gets underground. Christopher K. Johnson (who you would swear is a dead ringer for Ian McKellen) has fun with the Dr Mengele role. From there, the film soon develops a preposterously enjoyable absurdity. The script throws in a nutty concoction that includes everything from hollow Earth theories, Nazi UFOs emerging from under the icecap, zombie stormtroopers, mad science involving rejuvenation experiments and facial grafts from still living victims. There is a more than appreciable level of gore, including a scene where a victim (Lilan Bowden)’s brain is removed from her skull while she is still alive and another where Jake Busey decides to conduct an abortion on girlfriend Marlene Okner’s foetus immediately after she announces that she is pregnant to him.

The spectacular height of absurdity is the appearance halfway through of Adolf Hitler, still alive but now as a head in a jar Futurama (1999-2003)-style attached to a robot body, who leaps around to snip the heads off people and returns with the severed head impaled on the spike of his claw. The dialogue offers up classic lines such as the taunt to the robot Hitler “Come on, you bobble-headed sonofabitch,” and even offers up subtitled German for “kiss my ass.”

Nazis at the Center of the Earth is an entertainingly madcap film. It hits the level of gonzo absurdity that you would have wished had worn off on some of The Asylum’s absurdly titled but fatally straight-faced films like Snakes on a Train and Mega Shark vs Giant Octopus. Indeed, one would have to cite Nazis at the Center of the Earth as their most enjoyable effort to date.

Joseph J. Lawson is usually better known as visual effects supervisor for The Asylum, although has taken a director’s role on several occasions with the likes of Age of the Hobbits (2012), Age of Dinosaurs (2013), Alone for Christmas (2013) and Ardennes Fury (2014).