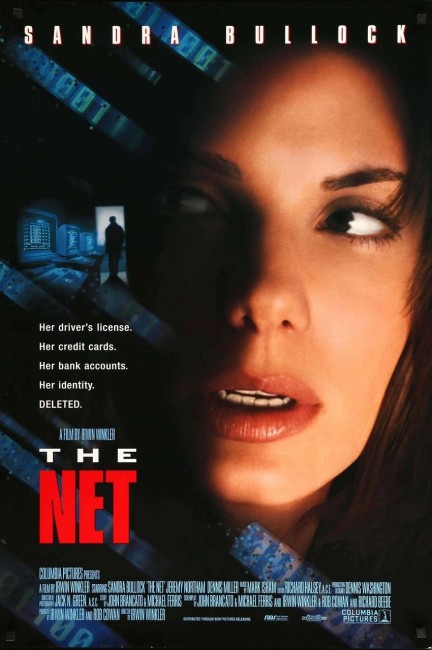 Computer programmer Angela Bennett receives a disk from a colleague that contains top-secret information. Shortly after, he is killed when someone alters navigation instruments in his plane, causing him to crash. Angela goes on holiday to Mexico where she is wooed by a handsome stranger Jack Devlin – only for him to turn out to be trying to get the disk. Ipon returning to the US, Angela discovers that her entire identity has been erased. She realises that her friend unwittingly uncovered information about The Praetorians, an outlaw hacker group that are managing a computer security company that allows them access to any information system in the country. In order to reclaim her identity, Angela must expose The Praetorians.

The Net purports to be a film about the internet and cyber-culture. Certainly, that is what is was sold as. In reality though, The Net is a film that only uses the internet as a hook upon which to hang a standard thriller formula. The film’s attempts to set itself around the internet are nothing more than a trendy jump on a concept that, when the film came out, had just started to impact on society. The film even uses the name The Net in vain; for, in fact, The Net is a thriller about almost everything except the internet. In fairness to it, there are about four scenes with Sandra Bullock communicating via e-mail and one suspense sequence involving her hacking into a system.

In actuality, for the film, the internet is only what Alfred Hitchcock called a McGuffin – an excuse to hang the plot on. The suspense in the film is centred around car chases, people shooting at each other and the good old thriller scenario of the person whose identity has been erased. The crucial failing of The Net is that its’ suspense derives from these stock situations, not from its title concept. For all that it matters to the film, the sought-after computer disk could be anything – a briefcase, a document or a scientific formula.

The film has taken an idea that is ripe with fascination and fumbled it. The only real point the script has to make about the internet is the tired old hat wake-up call to warn us how about dependent we have become on our computer systems. With all the fascinating debates and issues that emerged as the internet and cyber-culture impacted on society – the debate over the freedom and restriction of access, the concept of the new Global Village and cyber-identity to the kneejerk obsession with online kiddie porn or sexual predators – one would have thought that the film might have found something more interesting to say about cyber-culture than the realisation that we have become dependent on our technology.

The film was spun off as a tv series The Net (1998-9), starring Brooke Langton in the Sandra Bullock role, but this only lasted for 22 episodes. The Net 2.0 (2006) was a sequel that rehashed the basics – woman on the run with her identity raised – but the ensuing decade of technical advance in terms of the internet failed to make for any more interesting a film.

The screenwriting team of John Brancato and Michael Ferris had previously written several B-budget films including Watchers II (1990), Mindwarp (1992), The Unborn (1991) and Severed Ties (1992), all under the pseudonym of Henry Dominic. They subsequently wrote David Fincher’s The Game (1997); The Others (2000), a short-lived tv series about a team of psychics; Terminator 3: Rise of the Machines (2003); the much ridiculed Catwoman (2004); the killer crocodile film Primeval (2007); the SF film Surrogates (2009); and Terminator Salvation (2009).