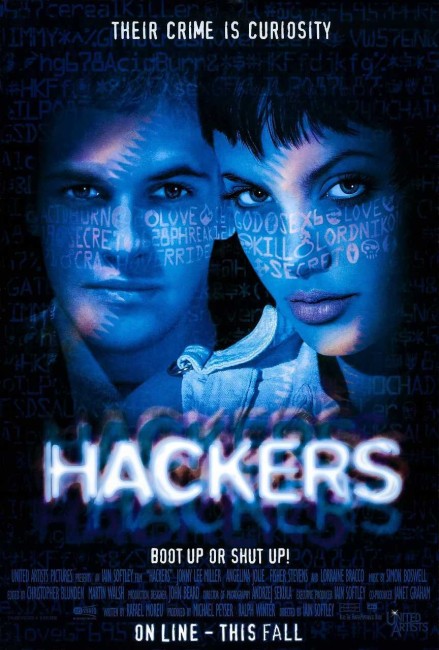 In 1988, eleven-year-old Dade Murphy, who operates by the handle of Zero Cool, is arrested and convicted for hacking into and bringing down 1100 computer systems. He is released on probation on the condition that he stays away from a computer and a touchtone phone until he is eighteen. Five years later, Dade and his mother move to New York. At school, Dade befriends a group of hackers and joins the competition among them to hack into systems for fun. Joey, a young wannabe in the group, then hacks into the system of the Ellingson Mining Company and gets away with some garbage files. In doing so, he upsets the plans of Ellingson security head Eugene ‘The Plague’ Belford who has planted a worm in the computer system that is skimming the company of funds. Plague calls in the FBI, who are leading a crackdown on hackers, and has Joey arrested. It is up to the rest of the group to clear Joey and stop Plague.

With the impact of the new paradigm of the worldwide web in the mid-1990s, there came a sudden rush of filmmakers trying to exploit the topicality of the computer/internet/cyberspace/VR revolution – from films like The Lawnmower Man (1992), Sneakers (1992), The Net (1995) and Antitrust (2001) to tv’s Bugs (1995-8) and Level 9 (2000). However, few of these understood the medium. The best hacker film of this period still remained WarGames (1983) – and that was made before the internet had even gained an awareness by the public at large.

Hackers is no different. It gives the impression that someone has read a couple of sensationalistic articles about teenage hackers wreaking havoc on corporations and tried to construct a film around the idea. It is a film that wants to be edgy and cool. You can almost see it breaking a sweat trying to establish its contemporary counter-culture credentials. Hacking is made to sit alongside Generation X fashion, rave culture, rollerblading, skateboarding and faux cynical indifference.

Unfortunately, the film’s pretence to offering an expose of hacker culture is extraordinarily shallow. It touches over various aspects – the need for a cool handle, competition to prove oneself by hacking a system and emerging with a trophy, the rivalry to see who can come up with the most daring assault – but at no point does any of it ever seem to connect with more than shallow clichés. The film feels very much like the scriptwriter has grafted what they imagine hacker culture to be like onto familiar teen stereotypes without even having met a single hacker in their life. The hackers that one knows are far removed from the people in this film – the real ones seem mostly grubby, socially deprived and dress in black a lot. (The best character in the film is Angelina Jolie’s cynical and unsentimental nihilist, who holds some appeal – alas, real world hacking is a pursuit where women seem to be a distinct minority).

The film opens with a great scene – of a courtroom where a hacker is tried and convicted of crashing 1100 computer systems, before the camera pans around to show the hacker’s face and we see it is a ten year-old kid. Thereafter however the film goes downhill. The script’s descriptions of the hackers’ activities are old hat clichés – changing systems to give people criminal records, cancelling credit cards, altering information to annoy people – activities that have been done to death by other films.

There is one worthwhile scene near the start with Jonny Lee Miller fooling a security guard into giving away a system pass over the phone but the rest of the film exists in a vacuum. For these scenes to emerge as suspense, one needs to be there alongside the hackers as they use such tricks to get inside systems – but everything these hackers do takes place as a series of fait accompli flourishes where we are never privy to how they do it. All that the film does instead is offer a medley of cliché scenes as Jonny Lee Miller and Angelina Jolie compete to make life miserable for flat-footed FBI agent Wendell Pierce.

And the film gets its set-up wrong. Things start to move promisingly into gear when Jesse Bradford is arrested and Jonny Lee Miller threatened but then the plot seems to put any concern with these matters aside and sidetracks off into the burgeoning romance between Jonny Lee Miller and Angelina Jolie and scenes with the two competing with one another. While these scenes are occasionally amusing, they should have come much earlier in the film.

The worst aspect however is the film’s sheer unbelievability. It has the problem of having created its teens as nihilists who are anti-authoritarian and don’t care about anything, only to then turn around and have them stand up to (God forbid) save the world from environmental disaster. The climax is absurd – hackers worldwide unite to defeat the evil corporation, a rogue tv broadcast is believed, the hero’s mother is released from custody on slim-to-no evidence, and the FBI agent that the hackers have spent a good deal of the film bugging turns out to be the good guy who shrugs off their harassment and comes and arrests the villains. For all its appeal to Gen X counter-culture anti-authoritarianism, this is a desperately traditional film that wants its anti-authoritarian hackers to prove themselves good kids and be accepted by the establishment.

Director Iain Softley gives the film a driving style, aided by a techno soundtrack. Unfortunately, his visual tricks are banal and clichéd – like the shot at the beginning that fades from a circuit board into an aerial shot down on a city. He is forever cutting away into little flash fantasies of what the characters are thinking – of Jonny Lee Miller wishing he was with Angelina Jolie, of outbursts of anger, and characters several times fearing they are about to be busted by the cops – but the results are banal, not to mention unsubtle. Hackers unfortunately never emerges as more than a shallow effort that wants desperately to be accepted by a niche market that it knows nothing about.

British director Iain Softley previously made Backbeat (1994), an impressive film about the beginning of The Beatles, and then went onto the worthwhile Henry James period adaptation The Wings of the Dove (1997). Elsewhere in the genre, Softley has made the alien visitor film K-PAX (2001), the voodoo film The Skeleton Key (2005), the fantasy film Inkheart (2008) and the imprisonment thriller Curve (2015).