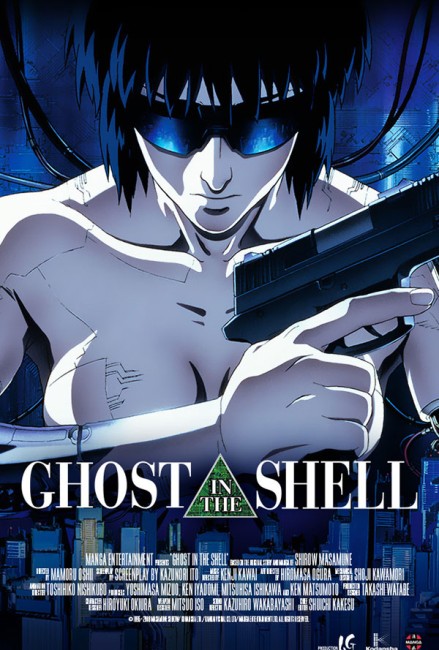 It is the 21st Century. Section 6, the Japanese special forces, attempt to stop a super-hacker known as The Puppet Master who has hacked into the cyber-brain of one of the translators at the Ministry of Foreign Affairs. Section 6 operatives Batou and his partner Major Motoko Kusanagi, who has had her body 100% replaced by cyborg parts, trace the source of the hacking to a sanitation engineer who has been given software by someone he met in a bar and told that it will help him to locate his estranged wife, only for him to realise that the memories of his wife and child are entirely artificial implants. A woman is brought in after being found wandering naked on a highway. It is discovered that she is a cyborg body that has been taken over by The Puppet Master. In a massive armed battle, Motoko discovers that The Puppet Master is a programme originally created by the Foreign Ministry to conduct covert diplomatic assignments but that it has instead become self-aware and is now claiming political asylum.

Ghost in the Shell is a Japanese anime that crossed over to wow audiences and become a considerable cult success in the West. It is an interesting film, although one that perhaps falls a little short of the high praise that was lavished on it. The film is adapted from The Ghost in the Shell (1989-97) from Masamune Shirow who also created Appleseed (1985-9), which has fueled a number of other film adaptations.

Ghost in the Shell is a certainly triumph of cerebral science-fiction over the visually spectacular for once. It is surprisingly short on the usual qualities that anime junkies go for in terms of all-out action and massively scaled vistas of devastation. There are a couple of worthwhile action sequences – the pursuit of a suspect through crowded streets; another with the cyborg heroine taking on a heavily armoured tank.

However, director Mamoru Oshii is not particularly interested in action – in any other Japanese film, the assault on the tank would be the climax of the show. Rather Oshii concentrates on his depiction of the world. He conjures Cyberpunk tropes with enormous dexterity – cyber-brains being hacked into; thermoptic suits; and the nifty trick of a typist whose fingers have been replaced by high-speed mechanical fingers.

Oshii’s Cyberpunk world is at its best during some of its wry throwaway observations – “There’s a lot of static in your brain,” someone comments of the heroine, which gets the terse reply: “It’s that time of the month.” Or how she and her partner sit drinking, while observing: “With the merest thought the chemical plants inside our bodies could metabolise all the alcohol in our blood in about ten seconds, allowing us to sit here drinking while on standby.”

The film is at its best during Mamoru Oshii’s hauntingly melancholic meditations on the difference between machine and human. Like the scene where the heroine wonders what would be left of her if she quit the service and had to give her cyber-body back to the government and notes that she is no longer sure what parts of her are her anymore, if indeed any of her old self still exists. Or the scenes where the Puppet Master turns the questions around on its interrogators, claiming the right to be a lifeform by asking if they themselves are not just computers that use DNA and that humanity should have considered the implications when it started remotely externalising memory.

Unlike most Western films, which are almost universally negative over the issue of human-machine meldings, this ends on an optimistic note. “What shall we do now?” the amalgamation of the heroine and AI asks itself, to reply “the Net is vast and limitless.” The last shot is a pan out across the city, an image reminiscent in its implications of the final shot of Tron (1982). On the downside, these impressive moments come embedded in a difficult-to-follow plot, a characteristic failing of Mamoru Oshii’s films. The governmental goings-on are very murky – it took a second viewing to untangle much of the plot.

Ghost in the Shell consolidated the name of Mamoru Oshii as a major director in anime. Oshii began working as a director in various anime tv series before becoming a feature director with the children’s fantasies Urusei Yatsura: Only You (1983) and Urusei Yatsura 2: Beautiful Dreamer (1983), both adapted from a tv series he had worked on, the science-fiction film Dallos (1983), the surreal fantasy film Angel’s Egg (1985), and the Transformer robot films Patlabor: The Mobile Police (1989) and Patlabor: The Movie 2/Patlabor: The Mobile Police 2 (1993). In between this, he moved into live-action with the SF action Red Spectacles (1987) and its follow-up Stray Dogs (1991), and the non-genre Talking Head (1992). Subsequent to the success of Ghost in the Shell, Oshii made the stunning live-action Virtual Reality film Avalon (2001), its later quasi-sequel Assault Girls (2009) and the live-action clone wars film Garm Wars: The Last Druid (2014). He has also made the anime The Sky Crawlers (2008) and an episode of the anime anthology Halo Legends (2010). Oshii has also written the anime Jin-Roh: The Wolf Brigade (1998) about a werewolf anti-terrorist squad operating in an alternate world post-War Japan and produced the impressive anime short Blood: The Last Vampire (2000) about a vampire government agent engaged in a war with demons.