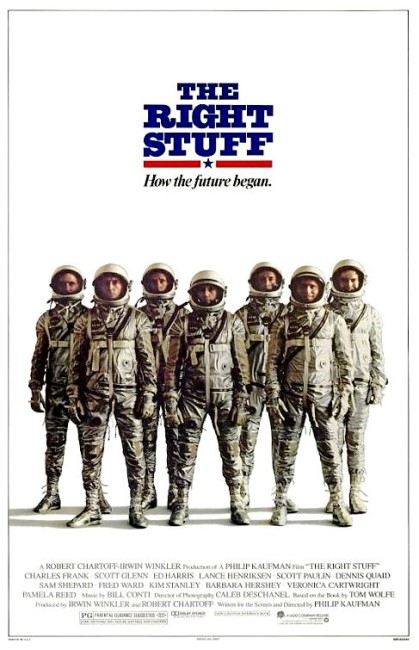 The true story of the US space program, beginning with Colonel Chuck Yeager’s obsessive and ultimately successful attempts to break the sound barrier in 1947. With the US’s desperate race to beat the Soviet Union and be the first to put a man into space, several test pilots were recruited to become the astronauts of the Mercury space program, with seven making it through the rigorous testing to ultimately be chosen. Though claimed as heroes by the nation, the astronauts had to deal with the temperamental effect the work had on their married lives, the constant press attention and the NASA establishment that regarded them as little more than lab monkeys. As they finally made it into orbit, they concluded that they were the men with ‘the right stuff’ that was needed to break through and make these extraordinary human endeavours.

This is a film is based on The Right Stuff(1979), Tom Wolfe’s warts-and-all non-fiction recount of the US space program, which originally began as an article in Rolling Stone magazine. The film version was made by Philip Kaufman, an independent director who had risen through the acclaimed likes of The Great Northfield Minnesota Raid (1972), White Dawn (1976) and The Wanderers (1979). Kaufman had more than a brushing interesting in space and science-fictional subjects, having directed the excellent remake of Invasion of the Body Snatchers (1978) and also signed on at one point to to the original version of Star Trek – The Motion Picture (1979).

On the face of it, The Right Stuff is not too far removed from such films as David Lean’s The Sound Barrier (1952) and Richard Donner’s X-15 (1965) about the test pilots and their hand-wringing wives. The central thesis of Tom Wolfe’s book was the same one that informed many of the science-fiction films of the 1950s dealing with spaceflight – Riders to the Stars (1954), The Quatermass Xperiment/The Creeping Unknown (1955) and others – the belief that breaking through into outer space was a feat that took a superhuman individual capable of being prepared to think outside the boundaries and who feared nothing at all, not even losing their own lives. Both Wolfe and Kaufman are clearly enamoured of their sheer ballsy machismo of the pilots – of stories like Chuck Yeager going to break the sound barrier and taking a cutoff broom handle to close the door because he didn’t want to tell anybody he had broken his ribs in a fall from a horse the night before.

You are never entirely sure if Philip Kaufman is making a critical portrait of the Mercury astronauts or one where he is enamoured of their attitude. All the characters tend to be written in broad, caricatured strokes. The film could easily give the suggestion that the US Space Program was run by politicians that were buffoons – Lyndon Baines Johnson, for instance, is caricatured as a vulgar Texan prone to temper tantrums like an overgrown kid (the film is clearly made with a Democrat agenda – the muchly revered John F. Kennedy who set up much of the vision of the Space Program is not portrayed at all, although his predecessor Dwight Eisenhower is and in an equally uncomplimentary light) – and was administered by bookish suits that had no real world experience and designed by arrogant engineers who regarded the astronauts as no more than lab rats.

Moreover, the film holds that the Space Race was eventually only won by balls and chest-beating braggadocio, of men who had the intestinal fortitude to put their lives on the line and cut through the lily livered crap from the people in Mission Control. This kind of caricaturing makes the film seem less an historical portrait than it does self-mythologising heroism. Nor are you entirely sure if Philip Kaufman believes in all the chest-beating nationalism that drove the Space Race or not – while the American attempts to beat the Russians are shown in often comic terms, the head of the Russian program is only shown as an evil bald-headed figure maniacally laughing as his face is double-exposed over the flames of the rocket launch. It is the sort of caricature that would sit perfectly as the villain in a James Bond film but in a supposedly serious historical work like this makes one think that Philip Kaufman is buying into the Joseph McCarthy-era caricature of the evil Commies as much as he is poking fun at American nationalism.

The special effects are fine. They were produced on a budget far less than many of the blockbusters of the time and are effective, although occasionally some of the shots of the Earth rotating from orbit do seem a little flat. There is a particularly magical scene with John Glenn and the fireflies that surround his capsule. This is also the scene that one had the greatest problem with. Kaufman inter-edits these scenes with images of Aborigines in the desert outside the Woomera tracking station dancing around a bonfire and focuses on the sparks rising up from the fires, the implication being that the Aborigines were calling up spirits to surround and protect the capsule. There is a lovely cinematic poetry to the scene but it is also one that has no place in the film. While the scenes of Glenn reporting seeing the fireflies was factual, the truth about the incident was a good deal grimmer than the film paints it – the so-called fireflies were actually particles of hard radiation coming through an unshielded capsule and burning out the retina of Glenn’s eye.

Moreover, the tying of it to Aboriginal mysticism promotes an anti-scientific view that makes The Right Stuff a New Age Space Mission film. The scene by implication says that mythological worldviews are equal to and equally as valid as scientifically determined ones. It is the same sort of dangerous thinking that says that a mythological worldview (The Bible) is equally as scientifically valid as one that interprets the past and our origins by examining raw data (the theory of evolution). One wonders if the same scene would not have been regarded with outrage if Kaufman had had, instead of Aborigines, included scenes of people singing hymns in a church and then the appearance of a Hand of God picking up the capsule and guiding it to a safe landing.

Occasionally, Kaufman digs underneath all the self-mythologising heroism to provide frank and honest portraits of the failings of the heroism and the characters in the public eye – insights into their troubled marriages – and provide some amusingly honest pictures of what went on behind the scenes – like the failure to take into account any need for Alan Shepard to go to the bathroom during his mission. Most of the time though, the film is amiable, broadly sketched comic scenes about the tough guys being put through medical tests – being guided to the toilets with balloons stuck up their ass, being required to provide sperm samples, fun made of a caricaturedly prim nurse. There are fine performances from all the principal astronauts – Ed Harris, Scott Glenn, Sam Shepard, Fred Ward with the show fairly much being stolen by a cocky and charming Dennis Quaid as Gordo Cooper.

Subsequent to The Right Stuff, Philip Kaufman has mostly concerned himself with works of literary erotica such as The Unbearable Lightness of Being (1987), Henry and June (1990) and Quills (2000), based on the life of the Marquis de Sade, as well as occasional commercial forays such as the Michael Crichton adaptation Rising Sun (1993). His other work of genre interest was the serial killer thriller Twisted (2004). Kaufman also creating the original story for Raiders of the Lost Ark (1981).