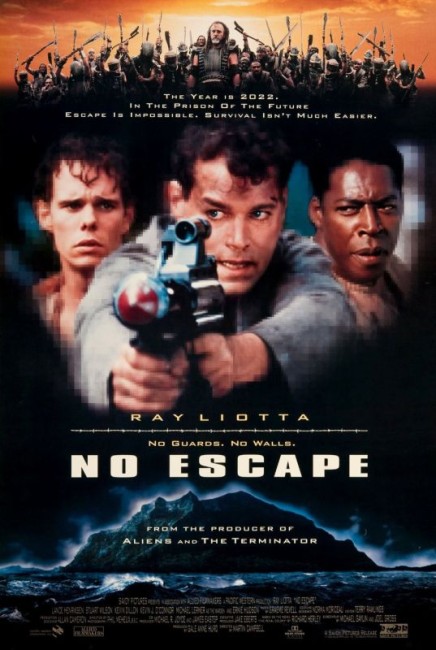 aka Escape from Absolom

It is the year 2022 where the prisons have been taken over by private enterprise. Convicted for shooting a superior officer, Special Forces captain John Robbins is sentenced to Absolom Island, which is reserved for the toughest, most persistent escapees. On Absolom, all prisoners have been abandoned in the wild with little in the way of tools. All attempts to escape from the island are monitored by satellite and armed helicopters. Robbins finds himself caught between the island’s two camps – the barbaric Outsiders and the peaceful Insiders who have built their own stockade. Although welcomed by the Insiders, Robbins refuses to become involved in the two camps’ ongoing war and determines to escape the island, despite nobody having done so before.

Martin Campbell has a good eye for widescreen action – the attacks on the camp and fight scenes all look good. However, as storyteller, Campbell allows the film’s sympathies and the plot devices to lapse into stock cliches. The morality that No Escape operates on is so simplistically reduced that it infuriates. The film sets up difficult to believe black-and-white cliches – the good guys are peaceful and community-oriented, the bad guys are brutal and disorganised. It is not a credible situation – the good guys are so nice and peaceful it is almost impossible to believe they are also a group of hardened killers and defiant escapees that the prison system is supposed to have given up on.

The hero is one of the action genre’s familiar wrongly judged innocents taking on a corrupt society. Here there is a certain ugly morality at work. The hero’s attack on the corruption of society, including cold-bloodedly shooting his superior officer, is meant to serve as justification for the film’s violence ie. because the society is corrupt, he is justified in executing a superior officer. The film’s opening title card uses the corporatisation of prison systems and, in effect capitalism, as a convenient explain-all for the corrupt system – but this is another of the sweeping cliches the film uses, as we learn no more about this future society than these vague blanket explanations.

No Escape is long and obviously thinks it is an epic. Where the few brief moments of originality come is in its depiction of a from-scratch culture built around salvaged debris – there is some inventive production design here. The one thing that No Escape does show is that divorced from ex-husband James Cameron, producer Gale Ann Hurd lacks a talent for picking good genre projects. No Escape lost out heavily at the box-office.