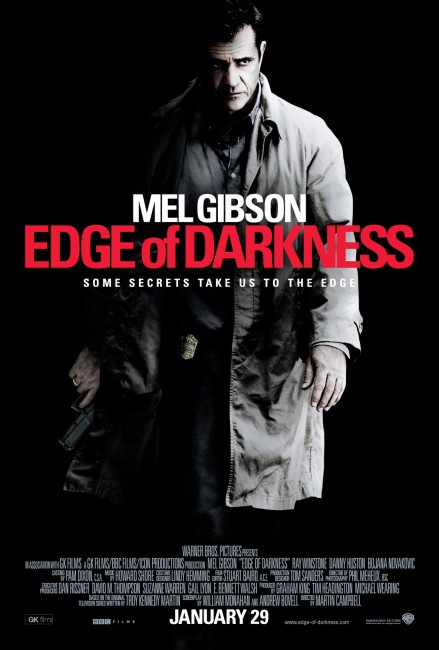 Thomas Craven, a detective on the Boston Police Force, picks up his 24 year-old daughter Emma, an intern at the local Northmoor nuclear research facility, as she returns home for a visit. Just as they go to the door of the house, someone appears and shoots Emma at point-blank range with a shotgun. Craven is shattered in the aftermath of the murder. Craven refuses to take a leave of absence. Craven’s colleagues conduct an investigation and, while they believe that the killer was targeting Craven, Craven instead begins looking into Emma’s associates. He is startled to discover that Emma’s body is suffused with radiation. Contacted by Jedburgh, a mysterious private security contractor, Craven comes to believe that Emma was the real target and that she was murdered, along with several others from a group of environmental protestors, because she attempted to blow the whistle on Northmoor’s illegal nuclear weapons construction program.

Edge of Darkness (1985) was one of the great television works of the 1980s. In the guise of a thriller, it was a damning condemnation of Margaret Thatcher’s England that took up its placards to protest alongside the Campaign for Nuclear Disarmament, not to mention joined the embryonic environmentalist movement to deliver a strong warning about the way the world was heading. Even aside from that, it was stunning in terms of drama and writing. Its success made the careers of several people – the unknown Bob Peck and Joanne Whalley who respectively played the police detective and his daughter, as well as that of Martin Campbell who went onto become an A-list director in the decade ahead.

In the case of Edge of Darkness, the film version comes from Martin Campbell, who also directed the original mini-series 24 years earlier. Indeed, the Edge of Darkness mini-series got Martin Campbell’s name noticed and allowed him to branch out into feature film directing. He subsequently went onto increasingly big-budget works like the psycho-thriller Criminal Law (1988), the US tv movie Cast a Deadly Spell (1991), the sf film No Escape (1994), the James Bond films GoldenEye (1995) and Casino Royale (2006), The Mask of Zorro (1998) and The Legend of Zorro (2005), the mountaineering action film Vertical Limit (2000) and the DC comics superhero adaptation Green Lantern (2011).

The main problem I had with a remake of Edge of Darkness – other than that it seemed a plain out bad idea from the outset – is that the original is so much a product of the time and place it was made – England in the 1980s under Margaret Thatcher and the era when nuclear power and Ronald Reagan’s escalation of the nuclear arms race had angry protest mobs out in the street – that it is hard to think how the story could possibly be translated to the USA in the 2000s. The whole era of the Cold War, the nuclear arms race and nuclear power protest movements have either disappeared or are marginal issues today. The dramatic crux of the original series was the break-in to a nuclear reactor to steal some of its materials, yet it is hard to think how such could hold any frisson today with the nuclear power industry in heavy decline in both the UK and the USA, following the disasters of Three Mile Island and Chernobyl.

The film’s answer seems to have been to take only some aspects of the mini-series and make its own story out of them. What we end up with is a film that bears superficial resemblances to the original – there is Craven the widower cop who sees his daughter blown away with a shotgun on his doorstep in front of his eyes; there is his investigation into the daughter’s past where she is found to have connections to activists who broke into a nuclear power facility; there is a Jedburgh; there is a sinister nuclear power corporation with shadowy connections to government backroom deals – and that is about it.

To Martin Campbell’s credit, he does retain the narrative device of Craven having conversations with his dead daughter, which one thought would be one of the first things to go in the film, although her appearances are less ambiguous here than in the original. However, the crucial aspects that are missing from the film are actually the most dramatically interesting scenes in the mini-series – the gripping climactic episodes where Craven and Jedburgh conduct a break-in to the Northmoor facility and Jedburgh returns with two pieces of fissile plutonium and upstages a nuclear conference; and the environmental angle and remarkable science-fiction ending where the Earth was coating itself with black flowers to bring about another Ice Age.

It is sad seeing what the magnificent original has been reduced to in the remake. The original was an incredibly powerful work that minced no words politically, nor in its well-ahead-of-its-time environmental advocacy; the remake is little more than a cliched corporate whistleblower thriller, which now features Mel Gibson in full Righteous Wrath mode a la Mad Max (1979) and in particular Ransom (1996), Payback (1999) and The Patriot (2000). When you think of Bob Peck’s quietly understated Craven in the original and try to imagine him holding a gun to the foreheads of executives to demand the truth or casually shooting people in his way, as Mel Gibson’s Craven does here, it seems as far away from the character as it is possible to get. There is precious little of the titular darkness to the remake, only the turnings of cliched plot mechanics. Martin Campbell’s pacing is surprisingly slow, even despite the fact that he has pumped the story up with more in the way of crashing/speeding cars, gunplay and a considerable number more on-screen deaths than were ever present in the original.

Surprisingly little is done to update the milieu of the original to the 2000s, except perhaps to have Emma Craven obligatorily listed as a terrorist suspect. Indeed, the remake seems to want to assiduously avoid holding any political position – other than a few cliche corrupt corporate and political figures – to the extent that, even though environmental awareness is a far larger issue in the 2000s than it ever was in the 1980s, the film minimises this almost altogether. It even rewrites Emma’s background from an environmental activist who was part of the break-in to simply being an employee of Northmoor. Now she has also improbably been poisoned as well as blasted away by a shotgun (chiefly, it seems, so that the film can retain the scene where Craven discovers her lock of hair is radioactive).

The nuclear power aspect has been largely dropped and now Northmoor is engaged in some vaguely explained dealings creating illegal nuclear weapons for foreign powers. (One of the numerous improbabilities of the script is that of a US politician who argues in favour of the threats out there, yet seems to support building nuclear weapons for hostile foreign powers. Another is the character of Jedburgh, where the script cannot seem to decide whether he is engaged in aiding the conspiracy or helping expose it). At most in terms of political position, we get a climax with Jedburgh blowing away the corporate executives saying: “This country deserves better”, an action movie proclamation that is blandly devoid of taking any particular side with any substantial issue, something that could never have been said of the original mini-series. In so doing, it is hard not to think that the film is doing exactly what it accuses its politician figure (Damian Young) of being worthy of execution for – of taking the safe easy road rather than standing up to tackle the big moral issues it raises.

Mel Gibson does passably well as Craven, delivering the appropriate grief and anger required of him, and giving the nearest to a performance that Gibson might ever be accused of doing. The biggest disappointment is the recasting of Jedburgh with Ray Winstone. One might note that this is a reversal of the casting in the original – where Craven was British and Jedburgh American there, things are swapped around here. Somehow, Jedburgh as a Texan CIA agent with a dangerous intelligence beneath the loud and vulgar demeanour worked far better than Ray Winstone as a coldly anonymous security contractor for hire here does. While Joe Don Baker gave a performance of a lifetime as the original Jedburgh, Ray Winstone plays with a gravelly steeliness but does little to make the part memorable. A blandly villainous Danny Huston is also little replacement for Kenneth Nelson’s magnificently chilling Jerry Grogan in the original.

You have to ask how Martin Campbell could so sadly betray such a brilliant original. The only equivalent might be when George Sluizer made the excellent Dutch thriller The Vanishing (1988) and was then employed to conduct the total bastardisation of an American remake with The Vanishing (1993). The only answer you come up with is that Martin Campbell was little more than a hired gun on either version who never understood why the original worked, and that all the effect of the mini-series was down to Troy Kennedy-Martin’s writing. Alas for Kennedy-Martin, he died in late 2009 and never got to see the abortion made of his screenplay. One reads that Kennedy-Martin’s death was due to liver cancer – otherwise you might be tempted to assume that it was down to a heart attack after reading the script for the remake. The best thing that can be said about the remake is that hopefully it will mean the original will be re-released and discovered by audiences anew for the masterpiece that it is.