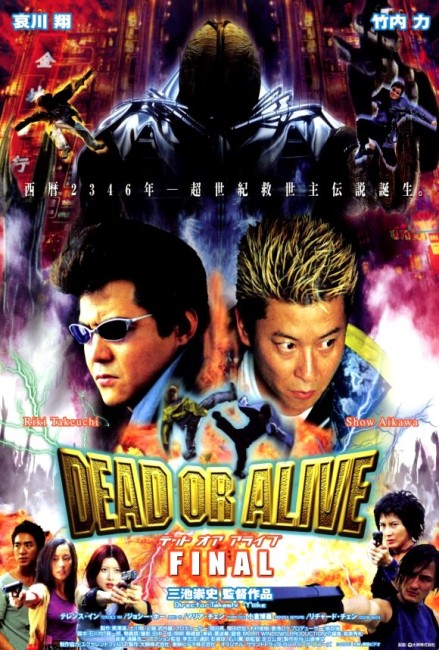 Yokohama, 2346. The city is ruled by the gay Mayor Wu who has outlawed reproduction and made it a crime not to take birth control pills. The mysterious Ryo joins a group of revolutionaries fighting against Mayor Wu where he proves to have superhuman fighting abilities before revealing that he is an android replicant. Wu retaliates against the revolutionaries with ruthless tactics. As most of the group is eliminated, Ryo goes into hiding with the pregnant June. There the two come to discover feelings for one another. At the same time, Honda, an officer on Wu’s police force, begins to have doubts about what he is doing arresting couples that have become pregnant and then makes a discovery about his own true nature.

In the 00s, Japan’s Takashi Miike has became one of the cultiest directors in the world with films such as Audition (1999), Ichi the Killer (2001) and Visitor Q (2001), all of which deal in sadism, violence and sexual perversity to an extraordinary degree. Takashi Miike is amazingly prolific – he has made a host of Yakuza films and seems intent on dabbling in almost every conceivable genre.

One of Takashi Miike’s more entertaining films was Dead or Alive (1999), a Yakuza film littered with casual violence and perversity and featuring a totally off-the-planet ending. This was followed by a sequel of sorts, the surreal Dead or Alive 2 – Birds (2000), which was not a sequel in any connected thematic sense and where the only point of connection was in Miike again pairing Riki Takeuchi and Sho Aikawa as two heroes on opposing sides of the law.

Dead or Alive: Final starts promisingly. Takashi Miike seems to have construed Dead or Alive: Final as his equivalent of Blade Runner (1982). From this he borrows the motifs of the airships flying over the cityscape and even uses the term ‘replicant’ (replikanto), a phrase that Blade Runner coined to describe androids. There is an effective opening shot where Miike’s camera moves up from slum level streets to show a digitally inserted airship cruising overhead, something that signals immediately that we are in a Cyberpunk future. Somewhat disappointingly, Miike does not seem interested in the background of his future any further than a few of these overhead airships. Indeed, though the film is set 300 years into the future, the setting could in every other way be contemporary. Dead or Alive: Final feels like a low budget copy of Blade Runner – Miike gives the impression of working on a very low-budget – the dictator of the future’s office, for example, seems to be a disused and graffitied warehouse.

Takashi Miike certainly directs some entertaining action sequences where he borrows a leaf or two from The Matrix (1999). There is a dazzling sequence in sped-up, slowed-down motion where Sho Aikawa uses a bent pipe to catch a bullet coming at him and deflect it back at the shooter and then throws the pipe at Riki Takeucihi who cuts it in half in mid-air using a samurai sword. There is another scene where Sho Aikawa catches a bullet by clapping his hands together and then does a backflip to kick the bullet back through the gunman’s head. Miike has undeniably borrowed his effects from The Matrix, but these scenes have a distinct cool nevertheless. Taking a leaf from George Lucas’s THX 1138 (1971), Miike also gives us an opening that contrasts his rundown future with dated science-fiction prognostication, which he has taken from some unidentified black-and-white Japanese tv show.

Alas, perhaps due to his extraordinarily prolific output, Takashi Miike often seems rushed when it comes to some of his films. Dead or Alive: Final not only feels rushed but also that Miike was not that interested in the film. Not much happens during the first half. Aside from the aforementioned scenes, Miike does not seem interested in pumping up the action content and there is none of the ultra-violence or casual perversity that marks his cultier films or indeed the first Dead or Alive.

Further, Miike seems almost disinterested in engaging with his story, which is decidedly on the loose side. An American version of the film, for instance, would have tightened the show and concentrated on the action sequences, the romance and the heroes’ discovery of their android nature. All that we have here is another Takashi Miike Yakuza film with a few futuristic trappings.

Dead or Alive: Final however does pick up, particularly as a science-fiction film, during the last twenty minutes. There is a fine scene where completely out of the blue Riki Takeuchi’s wife starts to urinate motor oil down her leg and reveals that she is an android, where he pulls the plug on her and goes to his sleeping son, standing over him wondering if he too is an android. In the next scene, Riki Takeuchi goes to kill the evil Mayor Wu, only to realise that he himself is an android too and that his programming prevents him from killing Wu. There is some poignancy to the scenes with Sho Aikawa’s android admitting feeling for Josie Ho, although one wished their relationship had been expanded more than it was.

As with the other Dead or Alive films, Miike throws in a bizarrely surrealistic ending. Here the two central characters meet in a showdown in a factory, melt down together in an explosion, before emerging as a giant robot with a head constructed like a penis and the faces of the two characters embedded in its side. Takashi Miike gives the impression of having borrowed the idea for the climax from his good friend Shinya Tsukamoto’s Tetsuo: The Iron Man (1989), but quite what it all means is baffling. The climax does feature some clips from the preceding Dead or Alive films, which almost seems to suggest (as long as you don’t think too much about it) that the explanation of the Sho Aikawa and Riki Takeuchi characters being androids might suffice to explain the bizarrely surreal natures of the other films.

Takashi Miike’s other genre films are:– Full Metal Yakuza (1997), a yakuza/cyborg film; the teen film Andromedia (1998) about a schoolgirl resurrected as a computer program; The Bird People in China (1998) about the discovery of a lost culture; the torture and sadism film Audition (1999); the six-hour tv mini-series MPD Psycho (2000) about a split-personalitied cop tracking body-hopping terrorists; the surreal black comedy The Happiness of the Katakuris (2001); Ichi the Killer (2001), a Yakuza film with some extreme torture scenes; the controversial taboo-defying Visitor Q (2001) about a mysterious visitor; the surreal Yakuza film Gozu (2003); One Missed Call (2003) about ghostly cellphone calls; the ultra-violent Izo (2004) about a cursed, immortal samurai; an episode of the horror anthology Three … Extremes (2004); the superhero film Zebraman (2004); the fairytale Demon Pond (2005); the supernatural fantasy epic The Great Yokai War (2005); Big Bang Love, Juvenile A (2006), a prison murder mystery with SF elements; the SF film God’s Puzzle (2008); YatterMan (2009), a gonzo live-action remake of a superpowered anime tv series; Zebraman 2: Attack on Zebra City (2010); the videogame adaptation Ace Attorney (2012); Lesson of the Evil (2012) about a murderous high school teacher; As the Gods Will (2014) with high school students being slaughtered by a doll; Over Your Dead Body (2014) wherein the roles in a ghost story play come to replay themselves in the lives of the actors; the gonzo horror film Yakuza Apocalypse (2015); Terra Formars (2016) about giant mutated cockroaches on Mars; Blade of the Immortal (2017) about an immortal samurai; JoJo’s Bizarre Adventure: Diamond is Unbreakable – Chapter 1 (2017); Laplace’s Witch (2018); and The Great Yokai War: Guardians (2021).