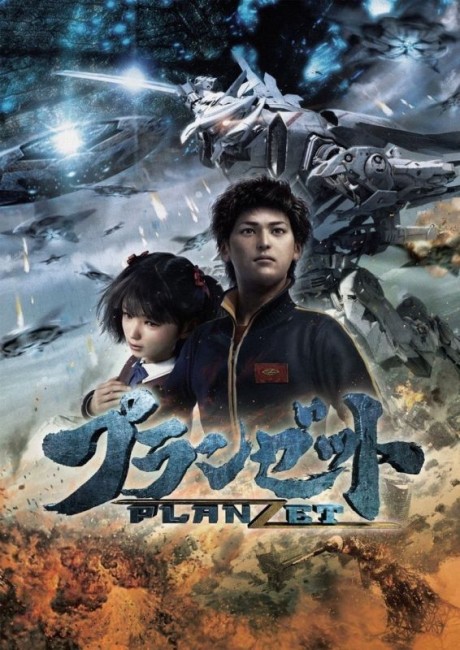 In the year 2047, Earth is attacked by an alien force who arrive in Earth orbit aboard the asteroid Februus. No known weaponry is effective against the FOS, as the aliens are named, and cities are devastated. In 2053, the remnants of the Planetary Defense Forces Alliance hide at a base beneath a volcano in Japan. Three pilots, Akishima, Sagawa and Captain Tazaki, are ordered to pilot the new giant robots known as Geometric Limbs against the FOS ships as a decoy so that the Alliance can ready and fire the convergence energy gun known as the D-Cannon at the asteroid. The cannon can only make a single shot and is the Earth’s last hope. Both Sagawa and Tazaki are killed in the attack – only for the D-Cannon to then fail to hit the asteroid.

Planzet is a Japanese anime. It was a directorial debut for Jun Awazu who performs many of the key creative functions in the film. Planzet only runs to 53 minutes long, leaving the impression, like Blood: The Last Vampire (2000), that it was conceived for much longer running time but more than this was curtailed because of a lack of budget.

As Planzet opened, I was immediately impressed with what Jun Awazu was doing. He has taken the model of what he is doing as Final Fantasy: The Spirits Within (2001) and its level of photorealistic animation and character detail. There is a stunning level of texture to the film – just details like the rust on the railings in the Alliance headquarters or the crew’s dirty t-shirts. Awazu directs the animation in a way that he focuses on the realism of the characters– movements. And as the action scenes kicked in, Awazu does the breathtaking changes of scale and perspective that frequently makes anime look so amazing.

Soon into the film, it becomes apparent that Planzet is yet another variant on the good old anime standard of the human-piloted giant robots in combat. Indeed, the set-up of humanity’s last ditch battle against an overwhelming and near-invincible alien invasion force reminds of Neon Genesis Evangelion (1995-6), which had just been remade in the last couple of years prior to this with Evangelion 1.0: You Are (Not) Alone (2007) and Evangelion 2.0: You Can (Not) Advance (2009).

It is at the point that its action begins that Planzet, despite an excellent set-up, starts to become substantially less interesting. Most of the plot elements are drawn from the cliches of Neon Genesis Evangelion and others of its ilk – the last ditch defence against aliens, the hero who goes into battle with brooding personal issues he needs to sort out.

At the same time as you are being impressed by the epic scaled action, it all cannot help but seem a bit silly – like watching the giant robots wielding things like giant handguns, machine pistols, rifles and swords against the alien invaders. These seem to be taking the anthropomorphism of the giant mecha genre to absurd lengths – why would you give a vast machine a pilot handled and sighted weapon instead of the far more effective likes of built-in and computer-targeted rocket launchers or cannons? Not to mention the fact that none of the giant robots seem to be field-tested and they and the weapons start failing or running out of ammunition as soon as the pilots get into the midst of action.