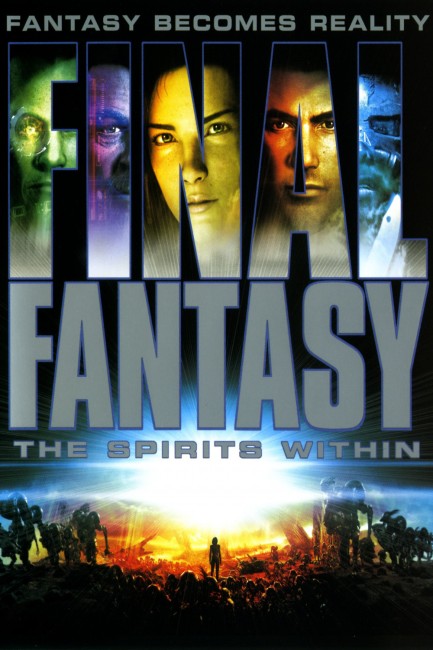 It is the year 2085. 34 years earlier Earth was invaded by spirit beings that have been named Phantoms that suck out the souls of any human they touch. The remnants of humanity eke out a bare existence in cities guarded by forcefields. The Phantoms can be killed if they stray beyond the site of the meteorite crash where they landed. General Hein pushes to use the Zeus Cannon to blast the meteorite site but Dr Sid believes that this will damage Gaia, the spirit of the Earth. Sid believes that he can instead set up a forcefield that will negate the Phantoms’ energy patterns. He has had some success containing the energy of The Phantom who touched his assistant Aki Ross. As the Council grants Sid the opportunity to complete his research, General Hein determines to sabotage the mission so he can go ahead with the use of the Zeus Cannon. However, his attempt at sabotage goes wrong, freeing The Phantoms within New York City.

As a work of animation, Final Fantasy: The Spirits Within is nothing short of stunning. There had been an increasing push in animated films at the time – Dinosaur (2000) and Shrek (2001) – toward a level of realism that is almost pictographic. Final Fantasy pushes that such a quantum leap further that one frequently tends to forget that they are watching an animated film and starts to appreciate it and its characters as though they were live-action. In fact, what one has is a film that seems neither animation nor live-action, rather something that lies in a nether-realm between the two. The characters have been facially detailed down to the extent we see their freckles, their cancer spots, their five o’clock shadow, their wrinkles, the individual salt’n’pepper whiskers of Dr Sid’s beard and the split ends of Aki’s hair.

This is adult animation the entire way – Final Fantasy: The Spirits Within is as far from the cuteness of even recent Disney films as Doom is from Hanna-Barbera. There is none of the playful frivolousness of a Disney film – the lighting level is even reduced to a point of near darkness. There are no comedy relief sidekicks – indeed, when the film does try to crack some humour it seems awkward amid the grimness of the rest of the film. When characters die or sacrifice themselves here, it is tragic and utterly final – they are not returned to life just because they are nice guys and should not have to die.

Being principally Japanese-made, Final Fantasy: The Spirits Within comes far closer to the sensibilities of anime than it does to Western animation, where most of the abovementioned is not as unfamiliar to audiences as it is to a Western audience raised on a diet of Disney classics. Like all great anime – Nausicaa in the Valley of the Wind/Warriors of the Wind (1984), Akira (1988), Princess Mononoke (1997) – the film trades in dazzling scales of size, both visually and conceptually. The film is extraordinarily well built as a science-fiction story, opening up from an alien invasion/shoot–’em-up that might be a standard scenario for a console game into a breathtaking work of pure science-fiction where a surprise conceptual reversal reveals that what we take to be an alien threat is not in fact be an invading menace after all.

Like both Nausicaa and Princess Mononoke, Final Fantasy has a strong environmentalist theme, one where the Earth is personified as a living life force. This is even more apparent here in a script that makes a black-and-white divide between one character’s brute-force militarism, which is clearly seen as wrong, versus a gentle pacific understanding and respect for life. The environmental eucatastrophe that climaxes the film is stunning in terms of the scale it is conceived on.

Epic-quality animation intended for adults, particular animated science-fiction, has not fared particularly well in the US and sadly Final Fantasy: The Spirits Within joined a pile atop other middling to outright flops such as the 1999 English-language release of Princess Mononoke, Titan A.E. (2000) and Atlantis: The Lost Empire (2001). Which was a sad fate for a film like this – such mammoth and painstaking effort and achievement deserved every success.

Final Fantasy VII: Advent Children (2005) and Kingsglaive: Final Fantasy XV (2016) were two further animated spinoffs from the computer games, although neither are related to this film or one another.

(Winner in this site’s Top 10 Films of 2001 list. Winner for Most Underrated Film, Nominee for Best Musical Score at this site’s Best of 2001 Awards).