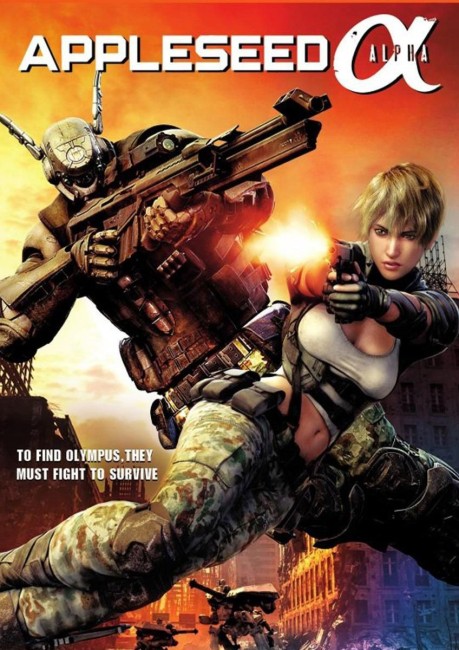 Deunan Knute and her cyborg companion Briareos Hecatonchires are working for the cyborg warlord Two Horns in the ruins of New York City. When their delivery of a case of vaccine is hijacked, Deunan and Briareos are forced to take another job from Two Horns so that the weak and faltering Briareos can get the repairs he needs. They are sent to eliminate several rogue automated drones on the edge of the city. There they are forced to intervene to rescue a group of travellers as they are attacked by the drones. These turn out to be Iris, a young girl from the fabled utopian city of Olympus, and her cyborg protector Olson. Agreeing to escort Iris to safety, they come under attack by sleek advanced cyborgs and Two Horns’ gang, both seeking to obtain from Iris the whereabouts of a powerful weapon.

Appleseed (1985-9) was a popular manga from Masamune Shirow, the author also of the multiply-filmed Ghost in the Shell (1989-90), it concerning the human Deunan Knute and her cyborg companion Briareos Hecatonchires who acted as security forces officers in the utopian future city of Olympus. The manga has seen popular interest on the screen, first with the anime film Appleseed (1988) and the later thirteen-episode anime series Appleseed XII (2011-2). However, it was with the big screen reworking Appleseed (2004) from director Shinji Aramaki that the manga gained its feet with considerable triumph. Aramaki returned with a sequel Appleseed Ex Machina (2007), although this was somewhat the lesser of its predecessor.

The 2004 Appleseed served to announce the name of Shinji Aramaki on the anime scene who had previously worked as a mechanical designer on various anime tv series. Outside of the Appleseed franchise, Aramaki has directed one of the episodes of the anthology Halo Legends (2010) and the full-length films Starship Troopers: Invasion (2012), Space Pirate Captain Harlock (2013) and Starship Troopers: Traitor of Mars (2017). This is a body of working that is making him one of the most exciting of the current generation of anime directors.

Aramaki returns to the Appleseed series for a third time with Appleseed Alpha, which is construed as a prequel to the other two films. It should be noted that the events here contradict the continuity established in the other films – the 2004 film had Deunan meeting Briareos, her former lover, and discovering that he had been transformed into a cyborg and then being taken to join Olympus. By contrast, this has the two of them in the appearance that we are familiar with – ie. he as a full cyborg – and working together as partners before they encounter Iris, who we later learn is a bioroid from Olympus. It should be noted that the film here does not end with them travelling to Olympus, the locale for all the Appleseed stories, leaving us with the implication that we are now in for a prequel series.

As might be expected, Shinji Aramaki places a stunning degree of detail into the film. The characters move with and have a depth of facial texture that resembles live-action. The animated cityscapes of the ruins of New York have a crystal clarity and detail that blows you away. Perhaps the one disappointment is that Appleseed Alpha abandons the Cyberpunk look of the first two films and is more of a post-holocaust film where most of the vehicles and technology are taken from the present-day world, which one supposes at least gives Aramaki the opportunity to shake up the familiar and do something different.

No other animation director does hard-edged realistic action like Shinji Aramaki does and the various sequences he sets up – the ambush with the automated drones attacking the convoy; Two Horns’ raid on the party and abduction of Iris in the ruins; and the extended climactic scenes bringing down the battle mecha – are expectedly stunning.

The complaint might be is that, like Starship Troopers: Invasion, Aramaki is working with a plotline that has been simplified and streamlined towards the action sequences thus is lacking the fascinating play of science-fiction ideas that we had in the first Appleseed film and especially the original Masamune Shirow manga.

The other complaint might be that the film only fully comes into what we expect of Appleseed and Aramaki in the last sections where Deunan finally gets to put on her power suit, where Briareos goes hand-to-hand with the sleek and sexy female cyborg (whose origins and purpose remain unexplained), and during the final assault to stop the massive spider-like battle mecha – a design that keeps reminding you of the climactic scenes of Wild Wild West (1999).

One of the more interesting aspects of the film is how it is tilted more towards English-speaking audiences than Japanese – there is the setting in the ruins of New York City where the places signs are all in English. Aramaki has even had the voices directly dubbed into English as opposed to the usual case of being dubbed in Japanese and then subtitled in English. With this, there is surely the tacit recognition that the greater audience for anime films is no longer domestic Japanese audiences but the wider English-speaking public.