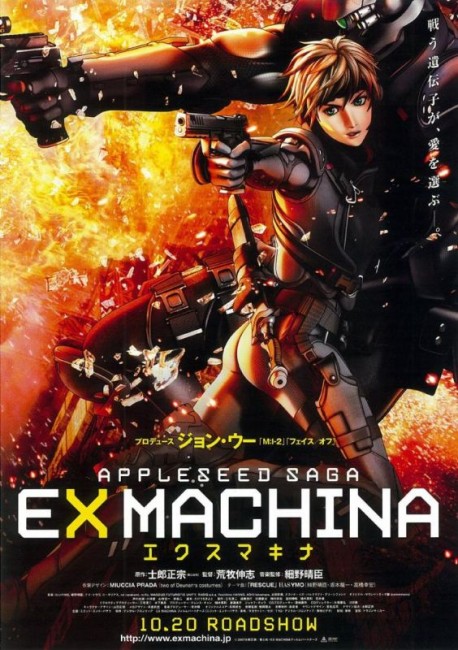 The year 2199 in the city of Olympus. ESWAT officer Deunan Knute and her cyborg partner Briareos succeed in stopping a terrorist operation comprised of rogue cyborgs. Briareos is injured during the raid. While he is recovering, Deunan finds that she has been paired with a new bioroid officer Tereus. Tereus’s features are identical to Briareos’s former human face. It is explained that Briareos’s DNA has been used as the basis of a series of combat bioroids due to Briareos’s near-perfect melding with the cyborg technology. At the same time, President Athena is trying to unite the nations of the world under a satellite network that gives Olympus access to all security information systems in order to prevent terrorist attacks. Meanwhile, ESWAT is having to deal with a number of incidents where both cyborgs and humans go amok, crashing heavy machine or attacking people, seemingly as though under remote control. Briareos prevents one of his cyborg colleagues from going amok and attacking the peace conference. Briareos then becomes infected and hacks the satellite network as it goes online. It is discovered that a mind control signal is being broadcast through the new Connexus personal communication headsets. Deunan, Briareos and Tereus head in search of Halcon, a rogue research division of the corporation Poseidon, which has created a program that is attempting to unite human and machine into a single entity.

Shinji Aramaki’s Appleseed (2004) is a modern classic of science-fiction anime. It in turn was a remake of the previous anime film Appleseed (1988). Aramaki reconceptualised the original manga by Masamune Shirow (published 1985-9) into a fascinatingly intelligent story. One of the finest aspects of Appleseed 2004 was Shinji Aramaki’s adeptness at creating enthralling action scenes and especially a dazzlingly rich and detailed depiction of a future city. Appleseed Ex Machina is a sequel from the same parties involved in Appleseed 2004. Appleseed Ex Machina comes co-produced by no less than action director John Woo.

While Appleseed 2004 was a modern classic, Appleseed Ex Machina is somewhat the lesser. Perhaps the reason for this is that the sequel has an original story whereas the predecessor was adapting the manga and attempting to define the original story and mythos with more depth. The effect here is less of exploring new original territory than there is in say a weekly action/crime oriented tv series where we have the same characters and same venue but a different self-contained adventure.

Possibly in that the material here is not adapted from the manga, it is also less interesting. A story about human-machine fusion and zombies is not on the same level as the first film’s depiction of a complex future society and these plot elements feel formulaic. The story about the Connexus system is a thin metaphor for cellphones and one that Appleseed Ex Machina delivers about the level of a luddhite warning. Indeed, the idea of cellphone signals turning people into zombies was beaten to the punch by the Stephen King novel Cell (2006) later filmed as Cell (2016).

Plotting tends to be vague and is never always clear why some things are happening – like why Dr Kestner, the apparent mastermind behind Halcon, kills himself? What causes Briareos to go rogue and abruptly hack into what looks like an ATM outlet and disrupt the satellite link? Or why Halcon and everybody are trying to unite people into a single consciousness and exactly what turning people into zombies through the Connexus system is meant to do with this? It does coalesce into an explanation at the end but the lead-up up until then proves confusing in the numerous running subplots and apparently random things all happening.

Nor does Shinji Aramaki deliver Appleseed Ex Machina with the same depth and three-dimensionality that he did Appleseed 2004. The action – one of the big aspects of the first film – is surprisingly low key for the most part. Indeed, aside from the opening battle with the rogue cyborgs in the church, it is some time before there are any further action scenes. Also the amazingly detailed cityscapes that Shinji Aramaki created for the first film have faded into the background – the city is detailed but it now seems more part of the environment than it did in the first film where it was so rich in detail that it was almost its own character.

However, Aramaki does eventually get it together. There is a fine sequence with Briareos fighting with the rogue Acaeus over the skies above the conference centre. The climactic scenes where Deunan, Briareos and Tereus venture into the zero gravity plant and take on swarms of robotic insects and giant mecha in a massively scaled battle is one point where Shinji Aramaki finally starts to compete with the climax of Appleseed 2004.