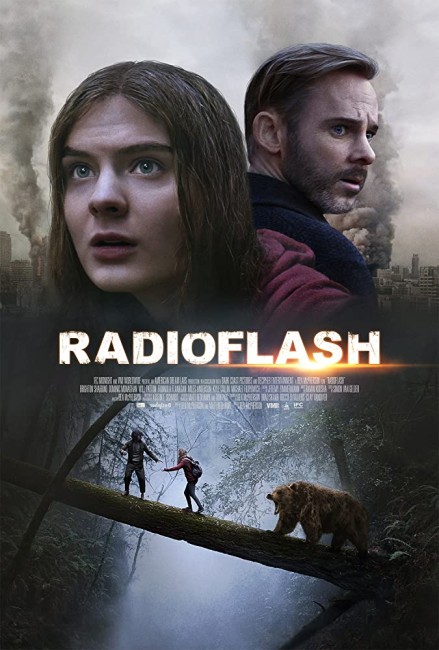 Teenager Reese and her father Chris are sitting down to dinner at home in Spokane when the power goes out. Reading up one of her grandfather’s books, Reese realises this is a ‘radioflash’, the signal that accompanies an EMP burst. She contacts her grandfather Frank by radio and realises that the situation is far worse than a localised blackout – the power has gone out along the entire Western seaboard. Frank urges her and Chris to drive up to his cabin in the woods where their chances for survival are better. They set out first thing in the morning but already around them things are falling into a state of anarchy. After crashing on the road, Reese and a badly wounded Chris are forced to continue on foot through territory that has become dangerous and lawless.

Radioflash was a directorial outing from Ben McPherson who had previously directed the documentary Skeleton Picnic (2013) and the film Man in the Moon (2013), neither of which appear to be widely seen, as well as produced the reality tv series Knights of Mayhem (2011).

Radioflash is a film about a catastrophe and the resulting social collapse. As with most modern efforts in such vein, the actual nature and origins of the catastrophe are not dwelt on beyond everything being put down to an all-embracing EMP flash affecting the Western seaboard. Even then you have more than a few questions about the social situation – an EMP flash would fry all electronic and electrical equipment more sophisticated than a toaster so you wonder how it is that Brighton Sharbino is able to wheel out the old ham radio to contact her grandfather, not to mention how most modern cars would operate without their electronics. Or of that matter, would not the Eastern seaboard sent emergency services to restore law and order as soon as possible rather than just let the situation deteriorate? (Although I suppose given the ineptitude of the US government’s response to the Corona Virus outbreak then maybe not).

The film features a young teen protagonist, although welcomely she is just a character rather than this being some Young Adult work about her tribulations and triumphs. The landscapes during the initial journey are stunningly photographed and easily the best part about the film. There are times the film seems to veer off into New Age thinking. We have scenes where Will Patton shoots an animal and brings it home where he stands about saying a prayer of thanks to nature for providing and then drinks some of the animal’s blood. In another scene, Brighton Sharbino offers up medical treatments based on the Native American healing use of moss.

The main issue with the film is that the plot doglegs all over the place. There is a captivating opening scene where Brighton Sharbino is in a Virtual Reality simulation where she must answer a ringing phone in a room where every wall is covered from floor to ceiling by banks of phones at the same time as the room starts flooding. The puzzle nature of the scene makes for a fantastic opening hook but the frustration is that the scene has nothing whatsoever to do with anything that happens in the rest of the film.

The most annoying aspect of the film is its last three-quarters of an hour. Up until this point, it had seemed a halfway reasonable work about survival and a journey amidst the catastrophe of a collapsing world. On the other hand, as soon Brighton Sharbino is imprisoned on Fionnula Flanagan’s farm, the film slips right into Backwoods Brutality cliches. You feel like you are stuck in a film like The Texas Cain Saw Massacre (1974) or Timber Falls (2007) with a girl imprisoned by an in-bred backwoods family. Fionnula overacts her part as the matriarch of the family and there is even the hulking, seemingly in-bred family member who pursues Brighton because that’s what they always do in this sort of film. It feels as though we started watching one film before it abruptly switched channels on us and we ended up watching another film altogether.