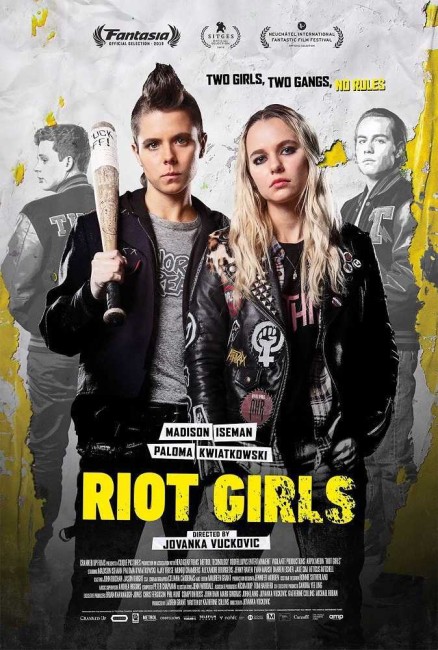 A disease has killed all adults. In the aftermath, the town of Potter’s Bluff has been split between two camps – the poor kids on the East Side, versus those on the West Side, which is ruled by the college football team Titans, led by the captain Jeremy. The East Side kid Jack conducts a raid on a Titan supply van, killing two of the members. In the course of this, Jacks aids Sony, a West Side kid fleeing from attackers, and brings him back to the commune he has set up in a warehouse for other strays. Jack thinks he left some medical supplies behind in the van and returns to get them only to be captured by Titans. Jack’s sister Nat sets out on a rescue mission, while her girlfriend Scratch insists on coming, as also does Sony because Jack saved his life. The three of them must make a dangerous sortie past Titans borders to rescue Jack.

Jovanka Vuckovic is known in the horror genre as the former editor-in-chief of the Toronto-based Rue Morgue magazine, which specialises in horror films, and as author of the book Zombies! An Illustrated History of the Undead (2011). She had previously made three short films and produced the all-women horror anthology XX (2017) for which she also directed the modestly effective episode The Box. Riot Girls was her feature-length directorial debut.

The scenario for Riot Girls reminds of early 1970s hippie End of the World films like Wild in the Streets (1968) where everyone over the age of 25 is put in concentration camps. Indeed, there are times you almost feel you are watching a remake of of Roger Corman’s hippie End of the World film Gas; or It Became Necessary to Destroy the World in Order to Save It (1970) where a gas kills off all adults and the football jocks become a marauding college football gang.

For some reason, Vuckovic also frames much of the story in terms of comic-book panels – an effect that was used in films like Creepshow (1982) and Hulk (2003). while Vukovic says she was attempting to capture something of the vibe and aesthetic of Tank Girl (1995). All I can say is maybe – Creepshow had a framing device about stories in a comic-books, while Hulk and Tank Girl were actual comic-book adaptations. Riot Girls is neither of those and there is a feeling of affected pointlessness to the use of such an effect.

Riot Girls sits on the screen leaving you confused as to why it was made. There is one clear purpose, which I will get to in a moment. Vuckovic never seems engaged with the collapse of society/post-holocaust aspect of the story. Is the virus widespread? Nobody ever seems to raise the question about whether the disease has affected anybody beyond the town. If it is localised, why has nobody come to the rescue? If it is widespread, how are a group of teens able to keep power and lights on? We see some scavenging going on in the early scenes and there is a roadblock created, otherwise this could be just a regular high school drama about a bullying clique – think something like Sean S. Cunningham’s The New Kids/Striking Back (1985). There is also the widespread statement that the film takes place in an alternate history 1995 but this is never mentioned on screen, nor any evidence given that the setting is not contemporary.

Vuckovic has made Riot Girls as a film about lesbian BFFs. The bad guys are representative of a bullying, authoritarian, personality cult led jock culture who come from the privileged end of town. The good guys are from the poor side of town and live a communal lifestyle where they group together to help those in need. The film is essentially the two lesbian BFFs against the evil jocks – the film is not a whole lot more complicated than that. In other words, Riot Girls is a work of modern science-fiction where the assertion of identity politics is pushed to the forefront and the basics of what a good science-fiction story should be about – the exploration of an idea or depiction of a changed world – is made secondary or irrelevant to this.

Certainly, the film gets a frisson out of Munro Chambers as the lead jock who goes at the role with a fierce, charismatic intensity. Madison Iseman, the only recognisable name present, is surprisingly subdued but Paloma Kwiatkowski plays with a ragamuffin surliness as her girlfriend. On the other hand, you think about the title Riot Girls. ‘Riot Girl’, often spelt ‘Riot Grrl’, was a term that was coined in the 1990s to describe a punk music movement in which various all-girl groups took up feminist issues and vented forth, which spread beyond that to refer to a punk feminism and fashion sense. It describes women with attitude and a fierce determination to rattle the cages and cause hell. Watching the film though, it feels a hard stretch to think of Madison Iseman and Paloma Kwiatkowski as riot grrls – at most Paloma has a partially shaven head and a willingness to use guns, where any anti-authoritarian attitude is more the film’s drawing up straw good/bad camps. The upshot is less riot girls than strictly average girls.