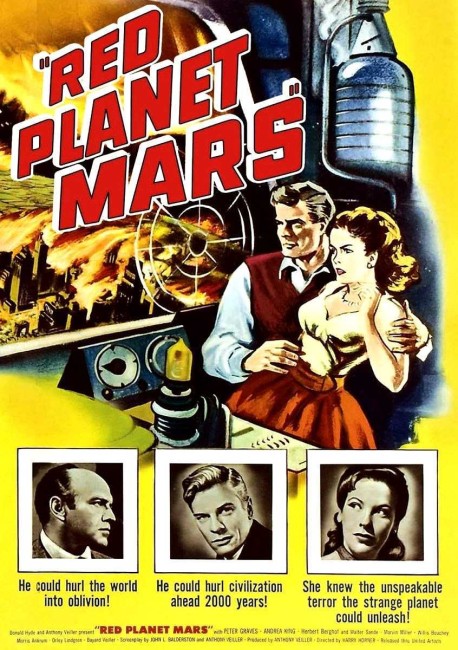 A scientist picks up radio signals from Mars, which describe the utopian life there, including long lifespans and plentiful energy. When the signals start to deliver pronouncements from the Martian Supreme Leader, humanity realises that it is God speaking. There is mass panic. However, all of this is a plot by an embittered ex-Nazi scientist working for the Communists who is bouncing the radio signals of the ionosphere to fool radio receivers. This backfires on the Communist government and they are overthrown when they try to stop people worshipping. When the Nazi is apprehended, an American scientist discovers a difference between his script and what the signals have been saying and realises that God is on Mars after all.

1950s science-fiction films have been notoriously interpreted as allegories about the fear of Communism that was rampant throughout the politics of the decade. This is a case that has been often overstated by cinema historians, with almost every film about fear of a faceless enemy having been interpreted as an allegory for ideological infiltration. That said, there are a number of fascinating examples where the Reds Under the Bed scare was made overt and Red Planet Mars is the most notorious of these.

Other examples include The Whip Hand (1951) about a smalltown housing a Communist fifth column planning to unleash a deadly virus; Invasion USA (1952) about a Russian nuclear attack on the USA; The 27th Day (1957), which had an alien race giving five people each a box that could destroy the world, followed by an international manhunt to obtain the boxes, ending with the boxes being opened and sparing those who sought to use them for good and destroying those who did not – the Soviets; and Rocket Attack USA (1958), a pseudo-documentary that railed loudly in the need to build a strong defence force against the Russian menace.

Red Planet Mars began as a play written in 1932 by John L. Balderston, the co-writer of the original stage play that became the basis of the Bela Lugosi Dracula (1931) and screenplays for a number of the horror classics from the 1930s, including Frankenstein (1931), The Mummy (1932) and Mad Love (1935).

The naivete of the film’s politics is incredible – it is not just the denouncement of the Soviet Union as evil but John Balderston’s tying up of religion in the mix as well. In real life, the 1950s was a period of newfound religious fervour – Billy Graham began his massive charismatic Christian crusades. There was a strong sense of millenarism, of the end of the world being nigh due to the looming threats of the unleashed A-bomb and the growing Communist menace. This is reflected in the film here where the Soviet Union is directly seen as a hotbed of atheism and religious suppression and by contrast the US is endorsed as an idyllic model of family, home and church-going Christians. Indeed, God had already spoken to humanity by radio only a couple of years before in The Next Voice You Hear … (1950).

The religious allegory is heavy-handed – the ex-Nazi villain has a speech where he regards Satan as the real hero of The Bible, while God acts on the American side and in the end the godless Communist state is brought down in a revolution by Christians who feel frustrated in their right to worship. Like the ending of The War of the Worlds (1953), Red Planet Mars sees that religion is what is needed to bring society back from the abyss of war, the threat of Communism and the Pandora’s Box of the A-bomb. However, the terms that the film tells it in, halfway between ludicrous 19th Century hellfire oratory and sentimental images of heart and God-fearing home, are utterly saccharine.

Red Planet Mars is badly written on most regards. The characters are single-dimensional ideological mouthpieces, giving pompous speeches filled with flowery and overwrought dialogue. You try spouting lines like “Mars – for over two thousand years the symbol of war; and now we try to fly in the face of providence and bring it closer to us” with a straight face. At another point, the Secretary of Defense advises The President: “You can’t hitch your wagon to that star, Mr President,” to be told “We’ve switched stars, Mr Secretary. We’re following the Star of Bethlehem.” God apparently still talks in King James English and prefers to use a radio instead of appear on Mount Zion.

Most incredible of all, nobody anywhere seems to question the divine pronouncements for one minute or consider that the Martians in referring to their Supreme Leader might not actually be referring to their planetary ruler. Moreover, the film’s notion of Mars is one that falls into Giovanni Schiaparelli’s outmoded theory of it being crisscrossed by canals, something that was well and truly discredited by 1952.