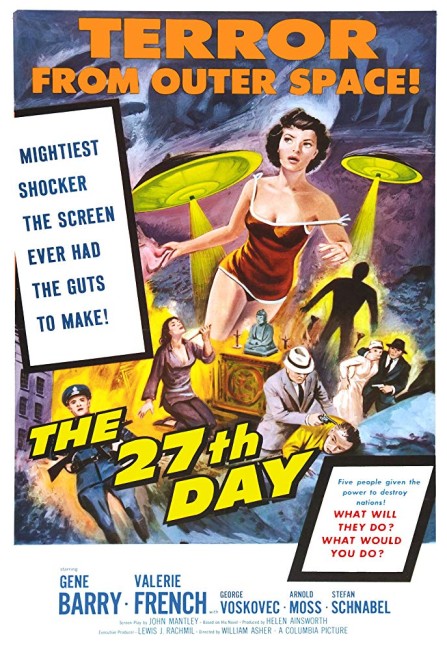 Five people from all around the world – Jonathan Clark, a newspaper reporter from Los Angeles; Englishwoman Eve Wingate; German physicist Klaus Bechner; Ivan Godofsky, a soldier from the Soviet Union; and Su Tan, a Chinese peasant woman – are abducted by an alien spaceship. The alien gives them each a palm-sized container that can only be opened by them and holds three capsules. If they say a set of meridian coordinates before any of the capsules, it will destroy all human life within a three thousand mile radius but spare everything else. The aliens are from a dying planet and want to relocate on Earth but their moral code prevents them from destroying humanity and so they offer the capsules so that humanity can do it for themselves. If each of them can go for 27 days without activating the capsules, the aliens will depart and the capsules will become inert. The five are returned to Earth. Eve immediately flies to L.A. to join Jonathan, just as the aliens take over airwaves to announce the names of the people who have the capsules. As a massive manhunt is mounted for them, Jonathan and Eve go into hiding at a racecourse that has been closed for the season. Behind the Iron Curtain, Godofsky is imprisoned and tortured by his superiors to force him divulge how the capsules work. When the Soviets announce that they have the weapon and demand that the US withdraw from Europe, war seems imminent.

The 1950s was the great period of Reds Under the Bed hysteria. With anti-Communist paranoia whipped into a frenzy by the House Un-American Activities Committee and Senator Joseph McCarthy, people began to suspect Communist infiltration on every street corner and suburban home. Many of the paranoid science-fiction classics of that era – Invaders from Mars (1953), It Came from Outer Space (1953) and especially Invasion of the Body Snatchers (1956) – have been referred to as allegories for the fear of Communist infiltration that was sweeping the country. To which all one can say is maybe. They are not films that come out and directly make the case as opposed to just being works that are paranoid, meaning that any attribution of political metaphor on the part of people in the present is being entirely speculative about the filmmakers’ intent.

Not that one should worry about concerning themselves with science-fiction films that may be Communist threat allegories when there were plenty of efforts that were making the case directly. Genre examples include:– The Whip Hand (1951) about a small town housing a Communist fifth column who are planning to unleash a deadly virus; Invasion USA (1952) about a Russian nuclear attack and military invasion of the USA; Red Planet Mars (1952) in which Earth starts to receive a series of radio messages from God on Mars that inspire a popular uprising against the Soviet regime; and Rocket Attack USA (1958), a pseudo-documentary that railed loudly in the need to build a strong military defence against the Soviet threat.

The 27th Day is one of those films that made the Communist issue direct. The bit that gets everybody is when the device is finally activated and destroys all “enemies of human freedom” – where the only one that we get to see being killed is Stefan Schnabel’s ruthless leader, while the rest of the Western world is spared. German actor Stefan Schnabel is cast as the Communist apparatchik with unmistakeable intent – where it seems all he would need would be a mustache to be a ringer for Josef Stalin. (Schnabel’s seemed to specialise in these roles – his most memorable part was in Clint Eastwood’s Firefox (1982) as a buffoonish Communist bully).

The 27th Day has clearly drawn much from The Day the Earth Stood Still (1951), one of the key films of the 1950s SF boom. Where The Day the Earth Stood Still had alien Michael Rennie arrive to deliver a stark warning about nuclear proliferation, The 27th Day has aliens arrive to conduct a test about humanity’s warlike tendencies using select individuals. The 27th Day is not the most outstandingly written of films in terms of dialogue or characterisation but what it does well is play out the moral arguments for and against the use of the devices and the tensions that escalate on an international level.

All of that said, there are certain problems with the premise. The boxes are essentially only science-fictional McGuffins and the aliens have no real purpose in the story other than to set the situation up between the competing nations. Certainly, as an alien relocation plan goes, the idea of giving another race boxes that could destroy all life to see if they will use them and deciding to just die en masse if they do not, surely ranks as one of the least likely schemes that an advanced race would conceive.

It is also worth pointing out that it is only George Voskovec’s realisation of the ambiguity hidden within the wording of the original message that allows him to turn the capsules around and use them for good. It would have been interesting to see the film push this to the extent of showing what would have happened without such a deus ex machina ending.

On the minus side, The 27th Day is visually nondescript. It lacks the style of The Day the Earth Stood Still, Invasion of the Body Snatchers et al, the way in which the respective directors drew on film noir to create a stark paranoid look on screen. By contrast, William Asher seems no more than a B movie director who sets shots up and move onto the next as quickly as possible. One of the more amusing lines in the film is when Valerie French gets in the taxi and Gene Barry turns on the radio and she asks “What in heaven’s name is that?” “Rock’n’roll … Music, almost” – where clearly the filmmakers are trying to jump aboard what was the new trend of the day – only when the music that we hear comes through, what we get is 50s not rock’n’roll but standard big band music.

The 27th Day was the third film for director William Asher. Asher will probably be best remembered for the various teen Beach Party films of the 1960s, which included Beach Party (1963), Muscle Beach Party (1964) and Bikini Beach (1964), plus a couple that involved gonzo genre meldings with Beach Blanket Bingo (1965) and How to Stuff a Wild Bikini (1965). Asher’s one other film of genre interest was the slasher film Butcher, Baker, Nightmare Maker (1982). Asher also did a good deal of tv work as director and producer, most notably producing the tv series Bewitched (1964-72). The film is based on a novel The 27th Day (1956) by Canadian writer John Mantley who also wrote the screenplay for the film version. Mantley later became a regular writer and producer on tv shows such as Gunsmoke (1955-75), The Wild Wild West (1965-9) and Buck Rogers in the 25th Century (1979-81). His only other genre film was the script for the psycho film My Blood Runs Cold (1965).