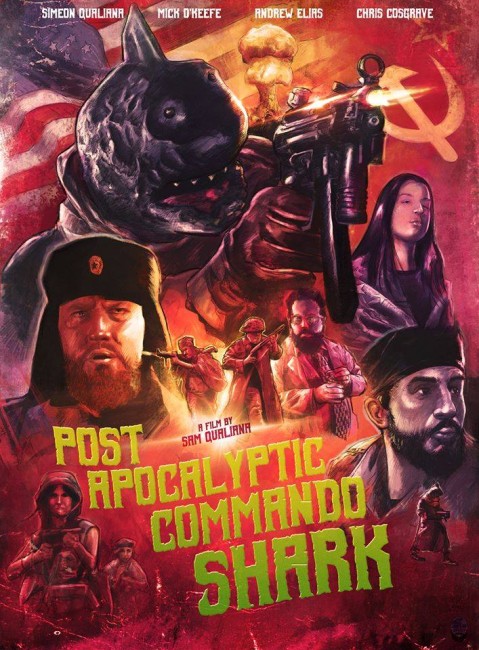 The Communists have invaded the United States. An armed resistance is fighting back but Russian scientists have developed genetically engineered commando sharks. These prove invincible as they move across the country wiping out all pockets of the resistance.

Post Apocalyptic Commando Shark was the third feature film for Sam Qualiana. Qualiana first appeared with the painfully bad gonzo killer shark film Snow Shark: Ancient Beast (2011) and followed this with the Found Footage Bigfoot film The Legend of Six Fingers (2016). The film is executive produced by Christopher Ray, the son of legendary B movie director Fred Olen Ray and director himself of various B movies. Christopher has made a number of gonzo killer shark movies himself with the likes of Mega Shark vs. Crocosaurs (2010), 2-Headed Shark Attack (2012), 3 Headed Shark Attack (2015) and Mega Shark vs Kolossus (2015).

The title Post Apocalyptic Commando Shark immediately had me sitting down to watch. I had the previous bad experience of Snow Shark firmly lodged in memory but such an entertainingly ridiculous title indicated that maybe Sam Qualiana was gaining a sense of humour and learning to plant tongue-in-cheek. And that maybe a deliberately absurd approach is something that might counter Qualiana’s cheapness and general ineptitude in other departments.

My hopes were in vain and Post Apocalyptic Commando Shark is just as terrible as Snow Shark was – the only difference is that this is a bad film where everything is played as a comedy. There’s the ridiculous of the title character (or given that you are never sure if there is only one or multiple commando sharks, is it characters?), played by an actor in a military greatcoat with a papier-mache shark head. The plot has a randomness that feels like it is slung together with no pre-planning. There is terrible acting right across the board (including Sam Qualiana himself who is hidden behind a partial facemask as a German scientist). The sets look like they are by amateur designers.

All of this could have worked if the humour had lifted the exercise up. However, Sam Qualiana fails at this as much as he does at general filmmaking. The level of the film is down around that of pantomime with broad performances consisting of people doing things with a deliberate and loud ridiculousness with the belief that audiences will find it funny. It isn’t. All that we have is a bad film trying to paper its cracks over by making a joke of its own cheapness and doing even that badly.

For some reason, Sam Qualiana sets the film in a post-collapsed USA where the Soviets have invaded a la Red Dawn (1984) or Invasion U.S.A. (1985). I kept looking for some kind of indication we were watching an alternate history film but Qualiana progresses on as though the Soviet Union were still a thing and had not collapsed. The weird thing about this is that Qualiana appears to be doing so with a patriotic bent – the scenes with the resistance fighters standing up for freedom and draped in American flags seems to go a little beyond parody. The end credits even note that 25% of profits from the sale of flags is going to veteran’s associations, suggesting that the film takes its patriotism quite a bit more seriously than you would think. The results become more akin to what feels like a crazed militia group’s inept efforts to make a comedy but where their real goals and ideals keep coming through.

(Winner Worst Film in this site’s Worst Films of 2018 list).