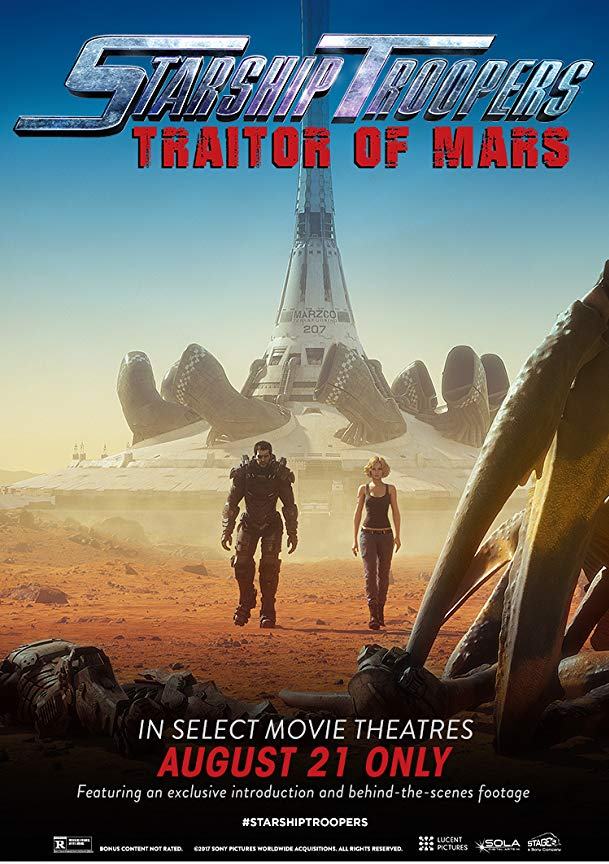 A disgraced Johnny Rico is now stationed on Mars where he has the assignment of training an inept unit of Martian soldiers. Just then, Mars comes under attack by a horde of Arachnids that rapidly overrun the planet, Johnny and his troop try to fight them off but are forced to withdraw. Johnny is left behind on the surface during the retreat. Back on Earth, Sky Marshal Amy Snapp exploits the situation, wanting to use the opportunity to quash Martian resistance and detonate the Q-Bomb that will destroy everything on the surface of Mars. Carl Jenkins uses his psychic abilities to warn Johnny and implore Dizzy Flores to abandon the fight against the bugs in another quadrant and head to Mars. On the surface, Johnny is left having to singlehandedly fight off the Arachnid mass and defuse the Q-Bomb.

Shinji Aramaki has become a specialist in hard-edged and credibly detailed militaristic SF anime with films like Appleseed (2004) and its two sequels Appleseed Ex Machina (2007) and Appleseed Alpha (2014), along with Space Pirate Captain Harlock (2013). This made him a natural for taking on Starship Troopers; Invasion – and not too surprisingly it ended up being the strongest film in the series.

On the other hand, when it comes to Traitor of Mars, the same mix fails to work. In order to do something different, Aramaki, merely co-directing this time, had altered the basics somewhat – locating the principal action on Mars rather than aboard spaceships or in orbit and with a long section of the film involving Johnny stranded on the surface fighting off the Arachnids on his own. The main problem is that no matter what, all of the films centre around the same limited images of soldiers shooting against bugs and there is not a huge amount beyond that, least of all in terms of characterisation.

Where Shinji Aramaki does make the film work is in all the places you expect him to – the military combat scenes. These are at their best during the latter half of the film – the scenes with Johnny singlehandedly fleeing hordes of bugs, trying to find protective armour and make it to safety; the efforts to fend off the massed bug attack in the terraforming plant and the tense climactic attack. These are enjoyable enough but between the repetitive nature of the Starship Troopers films, the lack of anything new to the mix and the thin characters/plot, this is probably the weakest of Shinji Aramaki’s anime to date.

Traitor of Mars does return to the satiric infobites/news clips we had in the first film, something that was watered down and dropped in the sequels. The script for a time amusingly digs into modern tv propaganda as promulgated by places like Fox News and Breitbart showing them making an under the radar attempt to prime the pump for a war by painting the Martian rebels in emotionally loaded and alarmist terms.

The main question raised by the title is who the ‘traitor’ is – is it Sky Marshal Snapp who attempts to launch the Q-Bomb against the Martian rebels or to the way that Carl Jenkins is framed by her? The title is not strictly accurate as neither character is a Martian thus cannot be said to be a traitor, which refers to someone who betrays their own side.