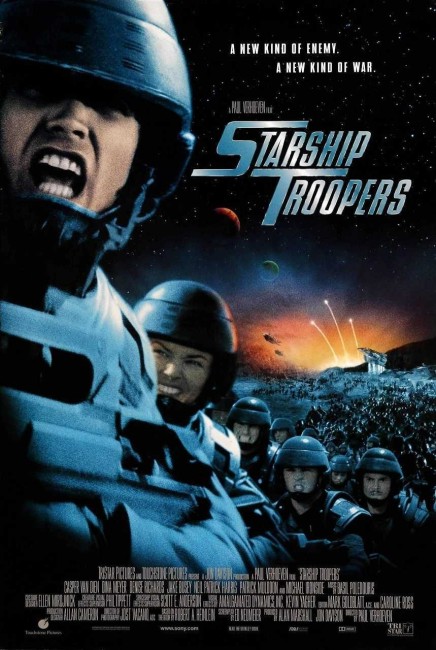 In the society of the future, people have to undergo military service in order to attain citizenship. Johnny Rico, his girlfriend Carmen Ibanez and two other friends enlist for military service soon after leaving school. They are required to undergo tough and brutal training. An asteroid then appears out of Klendathu space and strikes Buenos Aires, killing Johnny’s parents. Earth declares war against the Klendathu. Johnny immediately enlists. Despatched into combat, they arrive at the Klendathu homeworld and find themselves up against an enemy that consists of heavily armoured and near invincible insect creatures that slaughter the human troops en masse.

Robert A. Heinlein (1907-88) is regarded as one of the grandmasters of science-fiction literature. During his lifetime, he produced numerous classic novels that include Have Spacesuit, Will Travel (1959), Stranger in a Strange Land (1961), The Moon is a Harsh Mistress (1966), I Will Fear No Evil (1970) and Time Enough for Love (1973). Starship Troopers (1960) is one of Robert Heinlein’s most highly regarded works, it having won the science-fiction community’s Hugo Award for Best Novel when it came out.

Ever since then, Starship Troopers has polarised readers. The central issue with the book is that Heinlein, though transposing the setting into the future, is offering up a justification for militarism – almost the entire book exists as a philosophical treatise about the necessity of having to have a strong military in order to protect society. In his frequently articulated outlooks, Heinlein was a well-known libertarian and conservative – his later books became bloated with speeches or lists of pithy aphoristic observations on the human condition.

Heinlein served in the US Navy during World War II, although himself never saw combat. In Starship Troopers, he depicted a society that was run by war veterans where those who do not enter military combat were regarded as inferior and not eligible for full status as citizens. With scenes where Heinlein regards the flogging and hanging of cowards as justifiable, this is a future that has been justly called fascistic. Three decades later, Starship Troopers‘ greater influence can be seen in that it gave birth to a mini-genre of outer space militarism as perpetuated by modern writers like David Drake, John Ringo and David Weber.

Robert Heinlein had been sporadically adapted to the screen over the years – had even written a couple of screenplays himself (see below). This big-budget adaptation of Starship Troopers was taken on by Dutch director Paul Verhoeven. Paul Verhoeven is an interestingly controversial figure who has made a number of genre films. Verhoeven started out making several acclaimed films in the Netherlands with the likes of Who Is It (1971), Turkish Delight (1973), Keetje Tippel (1975), Soldier of Orange (1977), Spetters (1980) and the hilariously blasphemous The Fourth Man (1983). He then broke into English language, beginning with the brutal mediaeval film Flesh and Blood (1985), before taking on the highly successful RoboCop (1987). RoboCop gave Verhoeven a high profile Hollywood name and he went onto make other films like Total Recall (1990), Basic Instinct (1992), Showgirls (1995), Starship Troopers and Hollow Man (2000). Verhoeven’s career has slowed down in the 2000s amid a number of projects that never reached fruition with his only other film during the decade being the World War II Dutch resistance drama Black Book (2006) back in the Netherlands, subsequently followed by Elle (2016), his best film yet.

Through all of these, Verhoeven’s preponderance for serving up full-on lashings of sexuality and violence has become increasingly apparent. Subtlety is a concept rarely to be found in Paul Verhoeven’s films. Unfortunately, be it making a reality-bending psychological science-fiction film, an invisible man film, a story about the indignities of a young stripper, depicting a satiric corporate future, or a true story about the Dutch resistance during World War II, sex and violence seems to be the only tune that Verhoeven can sing. There also feels something soulless about Verhoeven’s films – he never seems particularly sympathetic to any of his heroes/heroines and readily inflicts brutal punishment, sadistic despatches and humiliations on characters.

Starship Troopers is a highly disappointing adaptation of Robert Heinlein’s novel. In the book, Heinlein portrayed a society that regarded military duty as the only means to attain citizenship and argued fervently for the necessity of a strong military. (Apparently, Starship Troopers is a required reading text in several US military academies). It was a dazzling vision, all the more so for the persuasiveness with which Heinlein argued a repellent idea. Whether or not you agree with its outlook, Heinlein’s novel is a powerful political treatise; on the other hand, the film retains the idea of the military society, strips all of the philosophy arguing in favour of it and turns the story into a big-budget bug hunt.

Other than the basic idea, the stories do not have a great deal in common. Heinlein was more interested in the philosophy and politics; the film is more interested in the shoot-’em-ups and the grunt angle of the story to which extent it has to invent an entire new plot that Heinlein never had. There is, for instance, no central romantic triangle in the book; in fact, there do not appear to be any women in service in Heinlein’s military. Oddly, the one thing we don’t get, which one would have thought would have had great special effects potential on the screen, is Heinlein’s marvellous image of soldiers being dropped from orbit and going into action in armoured power spacesuits.

The differences between film and book become more readily apparent when one reads how the film came into being. Initially, the film started as an original script about war in space until someone pointed out the similarities to the Heinlein book. Rather than face accusations of plagiarism, the producers brought up the rights to the Heinlein novel, made a few surface changes such as naming some of the characters after the ones in the book, retained Heinlein’s idea of a militaristic future, but mostly went back and made the film they originally intended to. There are few more blatant examples within the genre of all-but outright contempt for source material than this – Verhoeven claims that he started reading the Heinlein book but became “bored and depressed” after several chapters and went away and made the rest up.

As a film, Starship Troopers lacks any real effect. Characteristically, Paul Verhoeven loves to make big, slick packages of full-on sex and violence. When this works – Flesh and Blood, RoboCop, Basic Instinct – the results are entertaining; the rest of the time his films become bludgeoning, overstated and with a forward-heavy brutality that treats the people in them with callous disregard. This is even more evident in Starship Troopers than it is in other Verhoeven films – Verhoeven leaps in with a high degree of violence directed against aliens, and shows the cast being shot up, gored and hacked apart with great enthusiasm. The effects work – of masses of insect-like bugs, of scenes of spaceships being shot down and the like – are dazzlingly good.

However, Verhoeven seems to have done little to study how soldiers behave and think, let alone go into action in reality. Casper Van Dien and Denise Richards seem perfectly presented and beautiful people without any character depth below the surface. It feels exactly like a war film populated with people that have stepped out of Beverly Hills 90210 (1990-2000) – as a film, it has all the effect of a game of Doom. For a far better filmed work that captures something of what Starship Troopers should have been see either Aliens (1986) or the late, lamented tv series Space: Above and Beyond (1995-6).

Starship Troopers was slammed (as the book had been) for upholding the values of fascism. This is both inaccurate and accurate. On one hand, the film is simply portraying a society that is fascist, one is unable to see any points where the film clearly argues in favour of this as a desirable society, unlike the book. You never knew whether Robert Heinlein upheld such pro-militaristic values himself – in view of the strong libertarian ideas he continued to argue in later life, this was eminently possible – but that did not matter so much as the manner in which he portrayed this as an alarmingly viable society, which is after all what good science-fiction is all about.

The film is far more satirical about this society than Heinlein ever was with RoboCop-like cuts away to Net info bites that parody public service announcements. Say what you will about the society but in terms of its depiction we go from one version (Heinlein) that at least offers a strong and potent argument in favour of why it should be that way to a version (the film) that satirises the society and regards everything as a big black joke but offers no particular reason or argument why other than to inundate the audience with a spectacle of mass slaughter.

Unfortunately, Starship Troopers wants to have its cake and eat it too. It both wants to portray this society with black satirical relish and at the same time pose for heroic triumph. It tries to celebrate hero Casper Van Dien in saving his girlfriend Denise Richards and humanity achieving a major victory over the Bugs (although notedly the climax fails to finish the Bugs off and ends only on the winning of a potential advantage against them thus leaving the way open for a sequel). However, these heroic victories are considerably undercut by Verhoeven cutting away to blackly sadistic scenes of humanity torturing the bugs and satirical public service announcements/recruiting ads featuring the main characters. This final coda shows a film divided against itself – while also celebrating its heroic triumph, the satiric scenes belittling the heroes surely shows that Verhoeven doesn’t care about this.

It also shows that, despite the satirical presentation of his society, the film will gleefully jump in with a bit of mindless torture to an inhuman object for the sake of a laugh. As a result, you have a film that seems to celebrate the xenophobia represented by the likes of Independence Day (1996) taken to a mindless extreme, while also trying to satirise the society that upholds such – in other words, at the same time as it is making a statement supposedly about the mindless xenophobia of a militaristic society, it is a film that is also applauding the same mindless violence with an enthusiastic cheer.

What we need is an adaptation of one of the books that were written to counter Starship Troopers and Robert Heinlein’s pro-militarism – Harry Harrison’s satirical Bill the Galactic Hero (1965), which was eventually filmed as Alex Cox’s agonisingly cheap Bill the Galactic Hero (2014), Joe Haldeman’s The Forever War (1974), which was notedly written as a rejoinder to Starship Troopers by someone who had served in the Vietnam War, or Orson Scott Card’s Ender’s Game (1985) eventually filmed as Ender’s Game (2013). All of these have been kicking around Hollywood as potential projects over the last three decades. What we need is a human/alien war movie that views the subject not in terms of mindless red-blooded militaristic xenophobia but one that brings home the real moral questions of eliminating another entire species and, instead of a group of Ken and Barbie dolls doing parade-ground exercises, a film that portrays the real human effects of war.

(Winner for Best Special Effects at this site’s Best of 1997 Awards).