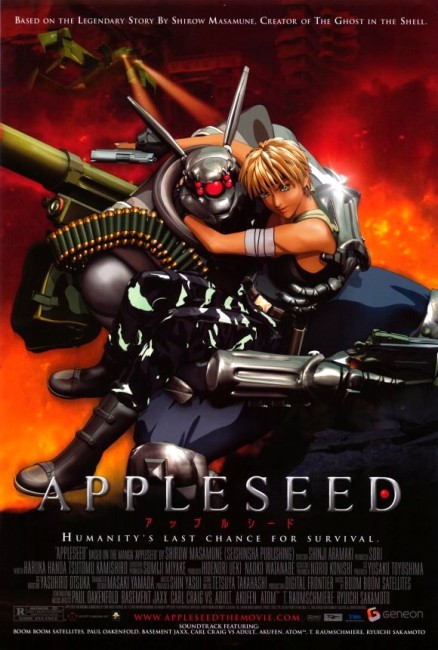 Deunan Knute is a lone solider fighting in the ruins of civilisation. She is captured and brought to the city of Olympus where humanity has started to rebuild. She meets her old partner Briareos who was killed but has been rebuilt with a cyborg body. She learns that Olympus has been constructed as a utopia where humanity can live free of the wars that destroyed the planet. Humans live alongside a population of Bioroids that have been bioengineered from human DNA but removed of harmful emotions. The city is ruled the super-computer Gaia, which makes decisions in conjunction with a council of human Elders. However, General Edmund Uranus is stirring prejudice against the Bioroids, wanting a return to warlike ways. He has built an army of Landmate battle suits in secrecy. The tanks that the Bioroids need to replenish themselves are then sabotaged. Prime Minister Athena Areios decides that the only solution to prevent the Bioroids dying out is to activate their reproductive capacities. However, the secret of doing so has been lost after the death of Dr Gilliam, the creator of the Bioroids. Athena sends Deunan on a mission to find Dr Gilliam’s missing research data. This also becomes a mission where Deunan learns the truth about her past and becomes a pawn caught between factions seeking either to preserve or eliminate the Bioroids.

Appleseed is an anime film based on the manga series Appleseed (or Appurushîdo) by Masamune Shirow. Shirow was also the creator of the original manga that became the basis of Dominion Tank Police and Ghost in the Shell. Appleseed was serialised between 1985 and 1989 in Super Manga Blast magazine and later collected in five volumes. The manga had led to an earlier film Appleseed (1988), which enjoyed some success.

This remake of the manga has been handed to Shinji Aramaki. Shinji Aramaki is best known as an anime designer who specialises in mecha (giant mechanical humanoid-shaped fighting machines) animation, having applied his design works on a great many films, OVA and tv shows. The best known of these was Robotech: The Next Generation (1983-4) and Bubblegum Crisis (1987), which Aramaki also wrote. As director, Shinji Aramaki had previously made the OVA films Metal Skin Panic Madox-01 (1987) and Genesis Survivor Garaith (1992), both further giant robot mecha anime.

Due to Shinji Aramaki’s background, Appleseed 2004 emerges as a dazzling and truly remarkable giant mecha film. Indeed, the success of Appleseed 2004 appears to have set a new benchmark for modern anime action and spectacle. There is a breathtaking opening with Deunan on the run from tanks and killer robots amid a massive outlay of artillery fire and mass destruction – a sequence where Shinji Aramaki has taken undeniable influence from The Matrix (1999) and throws in the animated equivalent of Bullet Time moves. There is a fabulous scene with Briareos fighting a fembot that is armed with a razor wire that gradually slices through his gun, before he cuts her apart and then punches right through her.

Aramaki is in his element when it comes to the giant robot scenes. The battle with Deunan in her combat suit tackling the Landmates as they race along a highway as though on skates is intensely exciting. Although it is the climactic scenes with Deunan fighting the massive mobile fortresses as they march across the city, crushing everything in their path that is completely exhilarating in its contrast of small and massive scale. This is surely about as exciting as it is possible for anime to get.

The most breathtaking aspect of Appleseed 2004 however is the background design of the future. The beautiful 3D designs that Shinji Aramaki offers as his camera cruises across the city, showing amazingly detailed apartments blocks, freeways threading between buildings and vehicles buzzing back and forward, or the cruise around the massive blue arch of the Tartarus building is extraordinary in the degree of photorealistic detail that has gone into the creation of these. It is almost as though one is following a camera car through the streets and airways of a real city of the future.

Aramaki creates some of these images simply for the sheer showoffy artistic joy of doing so – like a dazzling panorama of a cityscape lit up by night, which is then revealed to be reflected in a puddle before a boot splashes through it. Or the amazing realism of the shots where the plane approaches the oil rig in between the spray of the waves being tossed about by the storm to land on a helipad that is lit up in rain mist. There is a stunning shot where we see Deunan in the Landmate suit as a tiny figure flying across the city skyline all lit up in the golden light of a setting sun – it’s a shot that exists for no reason other than the pure artistic joy of having it there.

Having seen Appleseed 1988 before Appleseed 2004, it is worth comparing the two. I have not read the original manga but there is the feeling that Shinji Aramaki has gone back and told a more complete version of the original story. Both films concern the heroine Deunan Knute and her cyborg companion Briareos Hecatonchires and their dealings with terrorist forces within the future utopia of Olympus where the populace lives alongside bio-engineered humans. In both of the anime, the two of them have to fight factions who are attempting to disrupt the perfect society, while Briareos is revealed to be a traitor. There is also the addition here of a complex backstory about the creation of the Bioroids in order to protect humanity from its more warlike impulses.

Appleseed 1988 tended to throw us into the middle of the story with no explanation of who the characters were or the society they lived in. By contrast, Appleseed 2004 explores the background of who Deunan is, how the society came to be and her essential role in saving it. In comparing the two, you get the feeling looking back on Appleseed 1988 that you were watching a sequel or the later episodes of a tv series where you had missed the initial stories that set the scenario up.