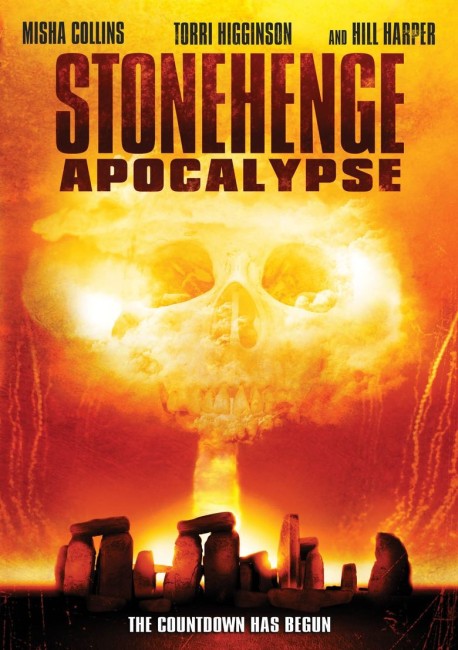 Jacob Glaser is a former scientist who now runs The Real Story, a radio show dealing with the paranormal and fringe science. Glaser’s friend, archaeologist Joseph Leshem, uncovers an ancient tomb in Maine. As Leshem places an ankh into the doorway, the tomb comes to life, sending an electromagnetic pulse across the Atlantic to Stonehenge. Tourists at Stonehenge see the stones start to move before the site sends off an energy discharge that incinerates them. Glaser flies to England and sneaks onto the site as the military cordon off the area. He is locked up as he tries to tell them what he believes is happening. They take notice after he successfully predicts the connection between energy discharges that travel at 10-hour intervals from Stonehenge to other ancient sites around the world, which are now suddenly collapsing and turning volcanic. Glaser believes these are alien devices left to terraform the Earth. He knows of an ancient artefact that he believes is a key that can be used to turn Stonehenge off. As they head to the US to obtain the key, it is snatched by Leshem who has realised that the tomb in Maine is a security vault where he and his cult of followers are intending to hide and emerge when the terraforming is complete and the world outside has been obliterated.

Stonehenge Apocalypse gives the impression that it was conceived not long after Roland Emmerich’s big-budget 2012 (2009) – although the idea of Stonehenge as an ancient marker for aliens is something that was first conducted in Nigel Kneale’s Quatermass/The Quatermass Conclusion (1979). There is the similar sense as in 2012 of the film appealing to wacky fringe ideas to create an End of the World scenario. Certainly, Stonehenge Apocalypse‘s insistence on a connection between ancient sites such as Stonehenge and the Pyramids of Egypt, Mesoamerica and Indonesia is ridiculous in terms of archaeology.

Clearly, this is yet another film that builds on the claptrap theories of Erich von Daniken and his Ancient Astronauts – see also the likes of Stargate (1994), AVP: Alien vs. Predator (2004), Indiana Jones and the Kingdom of the Crystal Skull (2008), Prometheus (2012) and in particular the Von Daniken documentary Chariots of the Gods (1970). In one of the more amusing touches, Stonehenge Apocalypse recreates a facsimile of Stonehenge (in Vancouver no less) but conveniently neglects to mention that the real Stonehenge site in England is part of a National Trust that is fenced off to public access with tourists not being allowing to wander freely among the stones.

The main problem with Stonehenge Apocalypse is that it is trying to copy 2012 on a B-budget. Rather than the epic scope of Roland Emmerich’s film, most of the drama here (at least during the first half) is centred around people standing around looking at monitor screens and spouting meaningless technical doubletalk at one another, which does not exactly make for an exciting End of the World drama. Interspersed with this are some occasionally very cheaply produced scenes of various pyramids opening up and turning into volcanoes. These are poorly produced from a visual effects standpoint and fall woefully short of the epic drama that the film aspires to. More to the point, they give us few of the expected set-pieces where the heroes and supporting cast are fighting for their life against various menaces – they are just eruptions that take place on a distant screen and it is only the scenes set inside the Maine pyramid at the climax that directly involve any of the protagonists.

Most of Stonehenge Apocalypse is written in terms of the cliches of the genre – the hero is a discredited scientist whose theories that were previously seen as crackpot prove to be the thing to save the day if only the other scientists who cannot see beyond the box of orthodoxy would open their minds (this is a film that explicitly asks us to side with wacky fringe science and reject any standard reason-based arrival at knowledge); the scientist’s archaeologist friend who becomes a cliche lunatic villain and engages in an even more crackpot scheme to maintain his own self-preservation above the lives of the rest of the entire planet; the military who want to nuke everything even though it could have devastating consequences because that is what the military do in films like this. More frustratingly, the script leaves any explanation of what agency set the ancient sites up unexplained – there is some speculation about the pyramids being designed for terraforming the planet by an alien race but outside this nothing is ever made clear.