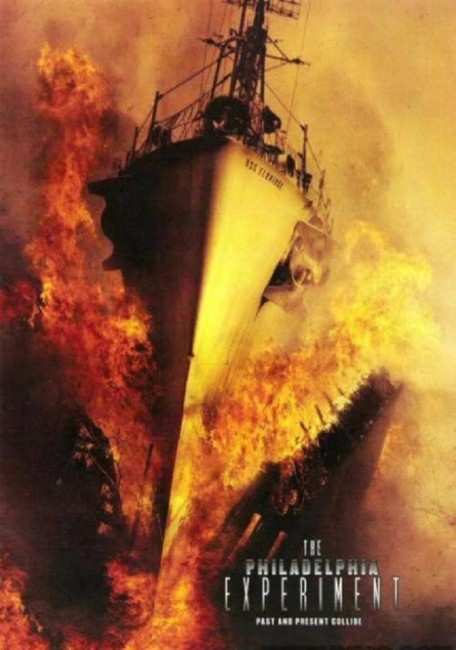 Scientists in the present-day reactivate the Philadelphia Experiment. However, the field goes out of control and materialises the USS Eldridge on an airstrip. Bill Gardner, a technician aboard the ship, is thrown free, while police deputy Carl Reed is sucked in as the ship dematerialises again. The Eldridge then reappears in the sky over Chicago, impacting into a high-rise office building. Meanwhile, Gardner, having been transported through time to the present, makes his way to his old home where he meets his granddaughter Molly who is Carl’s girlfriend. They are immediately pursued by the military and go on the run, trying to find a way to switch the engines in the USS Eldridge off to prevent a catastrophe throughout time, as well as rescue Carl. However, the military project leader Kathryn Moore has ordered that they be eliminated and the Eldridge destroyed.

The original Philadelphia Experiment was purportedly an experiment conducted in 1943 in an attempt to make the US Navy destroyer Eldridge invisible to radar. The story of what supposedly happened was published as the book The Philadelphia Experiment (1979) by Charles Berlitz and William L. Moore. The claim made by the book, denied by the US Navy and disproven by ship’s records, was that the experiment caused the ship to dematerialise from the harbour in Philadelphia and reappear in Norfolk, Virginia. A great deal of fringe science lunacy has grown up around what happened, involving time travel, aliens, UFOs and government cover-ups, even dubious eyewitness accounts. The book was optioned by John Carpenter who eventually passed on directing the film and allowed it to emerge as The Philadelphia Experiment (1984) under Stewart Raffill and starring Michael Paré as a sailor from the 1940s experiment who was thrown through time to the present. This was also sequelised as Philadelphia Experiment II (1993), which challengingly ventured to tell an alternate history tale but faltered through a low budget.

Now comes this remake. Or at least it appears to be a remake, although you get the impression that the film cannot decide whether it is offering up a retelling of the original film or else acting as a sequel to it. The plot closely mimics the events of the original film – a sailor from the 1940s being thrown into the present-day by the invisibility experiments that accidentally create a rift in time; his going on the run with a girl from the present-day amid several car chases; his cultural disorientation in trying to deal with the modern day; they contacting a scientist from the original experiment in an attempt to set things right.

However, this version also acts as a follow-up to the original where the experiment is being revived in the present-day and the USS Eldridge itself is thrown through time. To add confusion, Michael Paré turns up in both films although has gone from being the hero to a tight-lipped and menacing supporting heavy (at which it must be said, he gives a much better performance).

While the original had a number of moments, everything in the remake is conducted in a generic way and holds little that displays any imagination. There are some occasionally striking effects images – of the Eldridge materialised on the runway at an airfield or impacted in the side of a Chicago high-rise tower. The plot leaves a number of unexplained holes – like what happened to the military incursion team, the small plane and the attacking fighter jet that were caught up in the Eldridge’s displacement field and vanished when it dematerialised.

Or for that matter, the idea of Malcolm McDowell as a scientist from the original experiment still alive in the present-day when in fact McDowell was only born in 1943 – the same year the experiment is supposed to have taken place. (If we consider that McDowell’s character would have to at least have a graduate degree and be a minimum age of around twenty to work on the experiments that would surely make his character around the age of ninety in the present-day).

Amid the mostly forgettable performances, it must be said that Gina Holden, previously known for playing Dale Arden to tv’s Flash Gordon (2007-8), does rather well with the coldly efficient bureaucratic villainy thing.