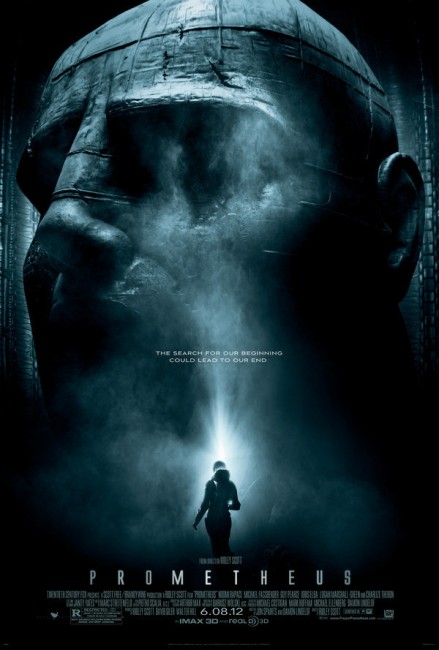 The year 2093. After the discovery of prehistoric cave paintings on the Isle of Skye in Scotland four years earlier, the spaceship Prometheus has been sent on a deep space mission by the Weyland Corporation. The crew are now woken from cryosleep where it is explained that the cave paintings have directed the way to a star system, a sign left by what they believe are the originators of humanity whom they call The Engineers. The Prometheus lands on the sole planet of the star system. Under archaeologist Elizabeth Shaw, the group search a series of ruins they find. Inside, they discover the remains of alien beings and Shaw finds a DNA match between them and humanity. However, there are creatures alive in the ruins that attack two crewmembers. Moreover, the ship’s android David is not being truthful about the purpose of the mission. David contrives to infect Elizabeth’s boyfriend Charlie Holloway with a sample taken from the ruins, causing him to become extremely ill. As they examine the ruins further, it becomes apparent that one of The Engineers is still alive.

Alien (1979) is an undisputed genre classic. It is one of the two to three most copied science-fiction films of all time. It launched or popularised the careers of almost everybody involved with it, including Sigourney Weaver in her film debut, genre writer Dan O’Bannon, artist H.R. Giger and especially director Ridley Scott. The idea of sleek black creatures pursuing people through darkened corridors and the dirty industrial spaceship look have become so prevalent that it is now a cliche. Back in 1979 however, these were groundbreaking new ideas. Alien‘s success was such that it has spawned a sequel of some type about every five or six years. First up was James Cameron’s Aliens (1986), which gained almost as much success and acclaim as its predecessor. This was followed by Alien3 (1992) and Alien: Resurrection (1997), before the series started to collapse into shabbiness after being crossed over with the Predator series in AVP: Alien vs Predator (2004) and AVPR: Aliens vs Predator Requiem (2007).

In the three decades in between Alien and Prometheus, Ridley Scott has gone onto become a frontline director. He stayed with genre material for the early half of the 1980s, delivering the classic science-fiction film Blade Runner (1982) and the less well-received fantasy film Legend (1985), both of which held extraordinary reinventions of their respective genre tropes that were as dazzling and inventive as Alien was. With the exception of the Hannibal Lecter sequel Hannibal (2001) and The Martian (2015) about an astronaut stranded on Mars, Scott abandoned genre material and directed a variety of mainstream films with the likes of Someone to Watch Over Me (1987), Black Rain (1989), Thelma and Louise (1991), 1492: Conquest of Paradise (1992), White Squall (1996), G.I. Jane (1997), the hugely successful Gladiator (2000), which netted him an Best Director Oscar nomination, Black Hawk Down (2001), Matchstick Men (2003), Kingdom of Heaven (2005), A Good Year (2006), American Gangster (2007), Body of Lies (2008), Robin Hood (2010), The Counselor (2013), Exodus: Gods and Kings (2014) and All the Money in the World (2017). While some of these are fine films – especially Thelma and Louise, American Gangster and The Counselor – what seems missing from these is the extraordinary visual flair, the craftsmanship and sense of an artist at work with light, cinematography and set design that Scott displayed in his earlier films. The middle-aged Ridley Scott has merely settled down to become a fair to reasonable commercial director.

Although he has been associated with a number of other genre productions, including Dune (1984), the Ebola outbreak drama Crisis in the Hot Zone, Tristan + Isolde (2006), I Am Legend (2007), an original title called Metropolis and sequels to Blade Runner, Prometheus marks Ridley Scott’s first return to fantastic cinema in twenty-seven years. Naturally, there was a great deal of buzz surrounding Prometheus, which was originally planned as a two-part film, where it was, then wasn’t a prequel to Alien, before finally being said to be merely something that existed in the same universe.

Prometheus shows Ridley Scott taking the time to expand the world of Alien. In the original, Scott did something unique that science-fiction had never seen before in terms of design with the rundown industrial ship look and H.R. Giger’s highly sexualised alien creations. Here the former has been replaced by a cleaner ship that has holographic displays rather than the flickering tv screens, and where with designer sophistication Charlize Theron’s private quarters artfully boast a grand piano and changing wall-sized digital landscape displays. We get the same fascination with detail and the matter-of-fact acceptance of a technological future that we had in both Alien and Blade Runner – as in all these cases, Scott moves his camera through the environment and the characters react to it in a way that conveys a gritty sense of verisimilitude and leaves you with the feel of actually being there.

Prometheus has an interesting cast line-up. In the frontline position is Noomi Rapace, who wowed the entire world with her electrifying performance at Lisbeth Salander in the Swedish version of The Girl with the Dragon Tattoo (2009), although here she plays against expectation and tones the jaggedness she had as Lisbeth down to be the sympathetic heroine. Equally, Charlize Theron goes against the grain and plays a supporting role as someone more cold and guarded than we usually see her.

Michael Fassbender is cast as a variant on Ian Holm’s android and is much more smilingly friendly, yet at the same eerily alien – the opening scenes watching him prowl around the sleeping ship on a bicycle, potting a hoop with a basketball every time holds something perfectly cool and detached to it. Michael Fassbender’s performance is one of the most fascinating aspects of the film – one that holds a friendly ambiguity that leaves you unsure which side he is on.

When it comes to the prequel aspect, Scott thankfully holds back on the desire to go for cutsie in-references and/or cameos placed there as fanservice for the audience. We get a few pieces that tie up with series continuity elsewhere – mention of the ubiquitous Weyland Corporation, an appearance an embryonic version of the Alien at the end – but mostly the film resists what must have been numerous opportunities in this direction.

Prometheus‘s premise has largely been pitched around the question of who the skeletal alien that we saw sitting at the telescope-like console in Alien was. The film ventures into some more areas of the alien ship and answers questions about why it crashed and the navigator’s species – although the answers provided are not nearly as profound or as interesting as the publicity lead-up expected one to believe. (Certainly, the sequel that the ending clearly leads to gives the impression we will be getting more of these).

Out of all the Alien sequels, the plot of Prometheus adheres the closest to the original film – spaceship and crew land on a planet and investigate an alien ship where they become infected by a lifeform that rapidly takes over the ship and starts eliminating the crew, leaving only a single surviving human woman who must fight off the alien in the tiny escape vessel, while there is also an android of sinister purpose aboard and The Company’s skulduggery thwarting their group’s survival. The main difference here is the focus on the archaeological quest centred around The Engineers and their mystery more than on an alien lurking in the corridors. This becomes the least satisfying aspect about Prometheus – the film goes from a first half that starts reaching for epic cosmological mysteries and revealing secrets about the origins of humanity to largely forget about this in the latter half where it decides it is time to imitate Alien and have people being infected and attacked by aliens.

However, the menace they are dealing with is not particularly well defined – vying between tentacular things, something that infects humans and impregnates Noomi Rapace, and the vague threat to Earth posed by the revived Engineer. There is not much explanation offered of what these things are. No matter how wonderfully ick the image of Noomi Rapace conducting a home abortion on herself in an automated med machine and delivering an octopus-like creature, it is never as classic a scene as John Hurt’s chestburtster sequence was in Alien. Nor do any of these amount to as sleek and primally stripped a menace that the H.R. Giger-designed alien hunting people from the shadows was in the original.

I became disappointed with Prometheus from its opening scenes where the archaeological dig uncovers the cave paintings and the film promptly delves into loopy von Danikenean/Ancient Astronauts theories. Erich von Daniken was a popular author who started publishing with Chariots of the Gods (1969) and gained a following with sixteen other books that put forward the theory that aliens had visited Earth in the past and guided the human race, having helped build places like The Pyramids and Stonehenge, and who were portrayed by the ancients in the Bible, the Easter Island heads, the drawings at Nazca and so on. These ideas have been ridiculed as pseudo-science by any serious historian and archaeologist but remain persistent and have crept into a number of other science-fiction works including Starship Invasions (1977), the original Battlestar Galactica (1978-9), Hangar 18 (1980), The Pumaman (1980), Sky Bandits/Sky Pirates (1985), Stargate (1994), Indiana Jones and the Kingdom of the Crystal Skull (2008), 10,000 B.C. (2008), The Fourth Kind (2009), Stonehenge Apocalypse (2010), Killer Mountain (2011), Prisoners of the Sun (2013) and Phoenix Forgotten (2017), as well as the von Daniken documentary Chariots of the Gods (1970). I was disappointed in someone like Ridley Scott who had raised science-fiction to new levels in his earlier works dragging his exercise down by indulging in such nonsensical pseudo-science. (If nothing else, this at least makes Prometheus fall into continuity with AVP: Alien vs Predator, which had similarly absurd von Danikenean notions). (For more details see Films About Ancient Astronauts).

I ended up disappointed with Prometheus. It is a film of great potential, great build-up, it arrays the design and hardware, creates epic mystery. There are a good many aspects to it – great production design, top drawer effects, fine casting. This works well for its first half but it in the end reveals itself as an empty hand of cards – half-baked von Danikenism and an eventual settling for rehashing Alien in ways that leave all of its promise up in the air and unfulfilled. I expected more from Ridley Scott’s return to genre material and especially to the Alien franchise.

Ridley Scott made a further prequel and follow-up to this with Alien: Covenant (2017) with Michael Fassbender reprising his role as David.