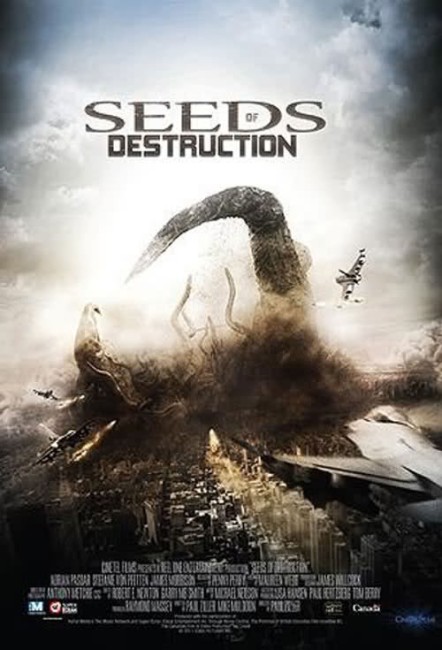 aka The Terror Beneath

Two young environmentalists are secretly filming at a Nevada mine, hoping to obtain evidence of illegal toxic waste dumping. They accidentally record an illicit deal as a man tries to sell a seed whose leaves have remarkable healing properties. The deal goes wrong and the man is shot, whereupon the seed falls onto the ground and begins to sprout vast roots that rapidly spread. Palaeobotanist Jocelyn Stein is summoned by the covert government agency SCOPE to advise with the crisis as the plant growth starts to cover vast swathes of countryside. She realises that the seeds are ones that come from the Garden of Eden that she and her colleague Dr Jeremy Frame were attempting to find. Frame appears to have genetically modified these into plants that are capable of absorbing toxins and will grow to cover the entire planet, destroying all life in their way.

Seeds of Destruction quickly falls into the formula established by these Syfy disaster films. A couple of faded tv or film stars cast as the heroes of the hour; some type of natural or man-made disaster that goes out of control threatening the entire world; a plan to defeat it that usually involves trusting someone with a whacky discredited theory; the race against time to gather vital intel and/or activate the device/scheme that will save everything; all of the action interspersed with canned pieces of action as the heroes race to save things, which usually involves them being shot at by people for some portion of the film. There is also somewhere in there the villain, or at least officious and self-interested official who is preventing the right things from being done and invariably gets devoured by the menace of the show.

Seeds of Destruction churns through these cliche elements with a dull predictability. The giant runaway plant growth is not terribly interesting as a central menace. The CGI effects are cheaply competent but rather repetitive and dull. Most of the film consists of the various characters running around fleeing the menace in their vehicles and managing to just stay metres ahead of racing faultlines. What the film might be noted for is the blithe tossing in of completely whacky explanations with a flick of the pen and delivered in perfect straight face by the cast – ‘they’re seeds from the Garden of Eden,” or where Adrian Pasdar casually announces ‘we need someone to hack the DMV.”