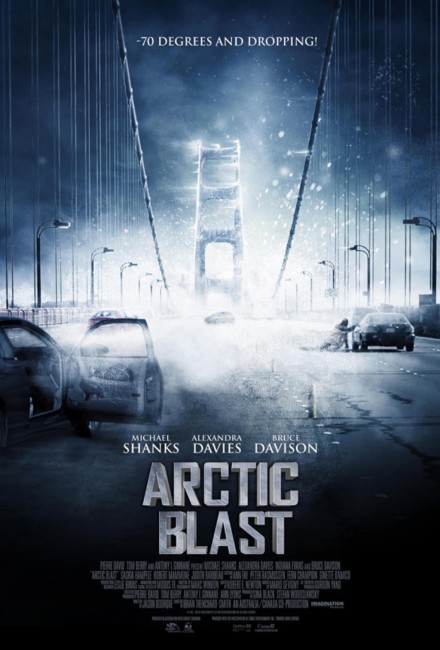 Jack Tate, a meteorologist in Hobart, Australia, is puzzled when one of the institute’s vessels is found run aground with all aboard having been frozen. Looking at the research data from the ship, Jack concludes that a rift has opened in ozone layer letting through a wave of super-cold over a hundred degrees below zero that is freezing everything in its path. He is witness as the wave of super-cold freezes two friends of his teenage daughter while they are surfing at the beach. As the cold wave moves inland and other rifts open around the world, Jack races against time to complete a risky solution.

Arctic Blast was shot in Australia by Brian Trenchard-Smith, a director with a long history in exploitation cinema. Though British born, Trenchard-Smith was raised in Australia and found his footing in various action movies in the 1970s Ozploitation heyday, most famously The Man from Hong Kong (1975). In genre material, Trenchard-Smith previously directed the sf prison film Turkey Shoot (1983), the quite good future satire Dead-End Drive-In (1986) and the modestly effective Frog Dreaming/The Quest (1986), a children’s film about the search for an Aboriginal monster, before going to the US for hackwork like Night of the Demons 2 (1994), Leprechaun 3 (1995), Leprechaun 4: Leprechaun in Space (1996), the alien abduction film Official Denial (1994), the meteor collision film Doomsday Rock (1997), Atomic Dog (1998) about a mutant dog, the Christian End of the World film Megiddo (2001), the haunted house film Sightings: Heartland Ghost (2002), the plague film The Paradise Virus (2003) and Tyrannosaurus Azteca/Aztec Rex (2007).

Arctic Blast quickly slips into the regular formula charted out by these other Syfy Channel disaster films. There are all the familiar characters – the scientist with the radical/discredited theory who could save the world if everybody would believe him; the sceptical authority figures who later become the other cliche of the authorities who sanction a radical military solution that will cause mass devastation, leaving the hero having to fight for his alternate and less harmful theory; the hero having to venture out into the midst of the catastrophe at a crucial moment to find medicine to save someone’s life; a teeth-gritting countdown to the seconds over the launch of the risky, untested solution that will save the world.

The film has much in the way of cheap effects (another hallmark of the Syfy Channel disaster movie) that mostly consist of a white cloud passing over places, people and objects and leaving them covered in frost. The film is dully placed together and the drama grinds to an indifferent conclusion.

The other major quibble I would have is with the dubious science used to justify all of this. The opening credits mention how the coldest place on earth is the ozone layer, which is 140 degrees below zero. Although a quick Google on the temperature of the ozone layer fails to dig up any facts that support this – what the writers seem to have confused this with is the mesosphere, which reaches around 100 degrees below zero, whereas the ozone layer is located in the atmospheric region beneath this known as the stratosphere. This is then extrapolated to suggest that a hole in the ozone layer would allow a super-cold wavefront to come down and freeze everything in its path.

There are some problems with this. The most obvious of these is one of basic home chemistry. The reality would be akin to what would happen when a glass of ice water is placed at room temperature – and that is that over time the ice water warms up to the mean temperature of its surrounding environment. The same would happen in Hobart, Australia – where another quick Google shows me that the average temperature for the city ranges between the early twenties and rarely below ten degrees Celsius. So basically the cold front in its trip down from the ozone layer (some 10-15 miles) and certainly by the time it reaches the reasonably temperate Tasmania would have a good deal of time to warm up. The longer that such air stayed there and progressed inland, the warmer it would become to the point it would be indistinguishable from a mild breeze on a warm day.