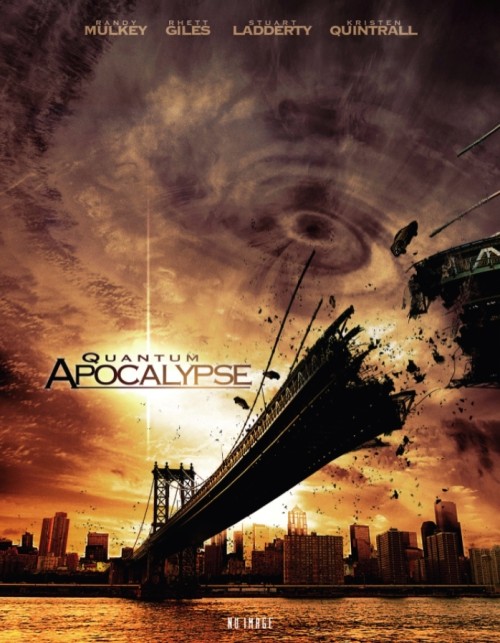 NASA scientists observe as a comet strikes Mars. Afterwards they realise that something had diverted the comet from its natural path. This is discovered to be a quantum anomaly made up of dark matter – moreover, the anomaly is on a collision course and will strike the Earth in 86 hours. As the anomaly approaches, everything is sucked up into it, while people find that matter starts to weighs less. In Lafayette, Louisiana, the town mayor Ben Marshall’s brother Terry is a savant with incredible mathematical abilities. Terry has deduced a complex mathematical solution to the coming quantum apocalypse and insists on going to Houston to deliver it to the NASA scientists. He and Ben struggle to get there across a collapsing countryside. Meanwhile, Ben’s son Leo, his girlfriend Lindsey and Ben’s new wife Lynne become caught up in the social collapse.

Quantum Apocalypse quickly sinks down to the cheap and ridiculous level that most of these other Syfy Channel end of the world films do. Due to the film’s low budget, almost all of the effects of the quantum apocalypse take place as things that happen off screen and are only described. At one point, the film borrows the basic premise from the classic British end of the world film The Day the Earth Caught Fire (1961) about nations firing nuclear missiles at the poles in an effort to sort out the disaster – although this is a scene that almost entirely takes place off-screen and of which we see almost nothing of the effects and aftermath. About all we do get to see are some cheaply rendered (if basically competent scenes) with New York City being flooded and London being sucked up into the vortex in the sky. There are various scenes of Rhett Giles and Randy Mulkey driving through the disaster at the end but these are lacking in any panoramic or widescale depiction – at most show a partially flooded street passing by outside the window of the SUV and the like.

As with many traditional disaster movies, these cheap end of the world films contrast the large-scale disaster with tepid human soap operas. The ones here travel in entirely predictable and cliche directions – the young teenage girl (Kristen Quintrall) whose bullying ex-boyfriend (Kyle Clements) suddenly uses the opportunity of the imminent social collapse to stop behaving nicely; that the character with the mental handicap (Rhett Giles) is going to provide the mathematical information that is going to save the day if only everybody would take him seriously; that the character with the health condition (Randy Mulkey) is going to get ill in the middle of the disaster; even that the new stepmother (Stephanie Jacobsen) is going to be accepted by the distrusting stepson (Stuart Lafferty) by the end of the film.

I had the half-expectation that the title Quantum Apocalypse might have led to a work that ventured into the fascinating world of quantum physics but this is not the case at all. The science used to justify what is going on is nonsensical – dark matter, for instance, is waved around as though it were magic fairy dust. One particularly silly piece is when people start experiencing weightloss and are suddenly able to lift entire vehicles. Surely, this would have disastrous effects everywhere else – like vehicles having a lot more inertia or when people start running or lifting something and find they have expended a great deal more energy than is now needed with potentially catastrophic results.

Australian actor Rhett Giles comes across quite well in the role of the savant hero of the show. On the other hand, Peter Jurasik, who I will always remember as Sid the Snitch on tv’s Hill Street Blues (1981-7), seems far too much of a beta male to be convincing as The President. You keep wondering how such a non-assertive seeming character would have been able to project the necessary charisma in election campaigning and televised debates.