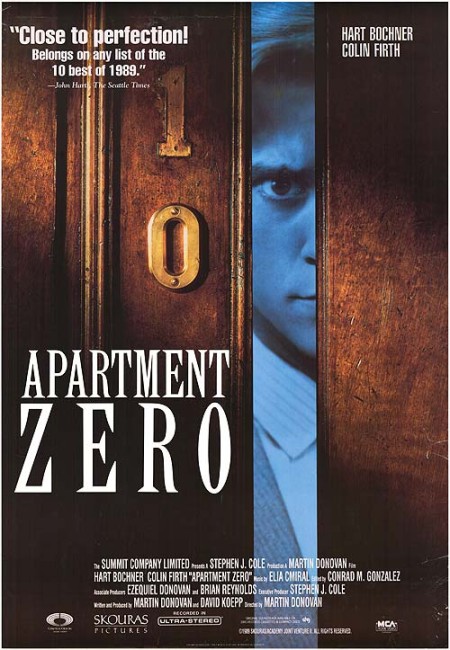 Fastidious, neurotic Buenos Aires cinema manager Adrian LeDuc advertises for a roommate and finally decides upon American computer programmer Jack Carney. A peculiar relationship develops between the two of them, with Adrian insisting on doing everything for Jack. However, as the handsome Jack starts to seduce all the other people in the apartment building, both men and the women, Adrian begins to suspect that Jack is not the person he claims to be. Gradually, Adrian starts uncovering evidence that connects Jack to a terrorist organization.

Apartment Zero is a variation on The Odd Couple (1968) – one that has amusingly been taken and rewritten by way of The Tenant (1976). Here all the potential gay intimations that The Odd Couple joked around but avoided mentioning are brought out in the open and played up to the hilt for all the eyebrow waggling and dominant/submissive theatrics that Colin Firth and Hart Bochner can manage.

The most successful parts of the film come with a dark, scintillating brilliance as the enigmatic Hart Bochner appears as a mirror of the sexual fulfillments of all the other tenants in the building. However, Martin Donovan is a director with ants in his pants – he playfully twists and turns the film into everything from being an apartment house black comedy (like The Tenant with a sense of humour, albeit strained) to a political paranoia thriller and a dark psychological thriller about predatory bisexuality. There is a very eccentric ending (again like The Tenant) that fades out as Colin Firth takes on Hart Bochner’s identity.

Unfortunately, in juggling all his balls at once Martin Donovan leaves half of them up in the air altogether – it is never made clear why Jack needs to leave the country so desperately, or what he is doing in it in the first place. Donovan frequently forgets these elements, turns away and starts to chase different angles altogether. There are all the tensions and elements of a horror film and a thriller present but the film is so all over the place and Martin Donovan so antsily contrary that none of them gel.