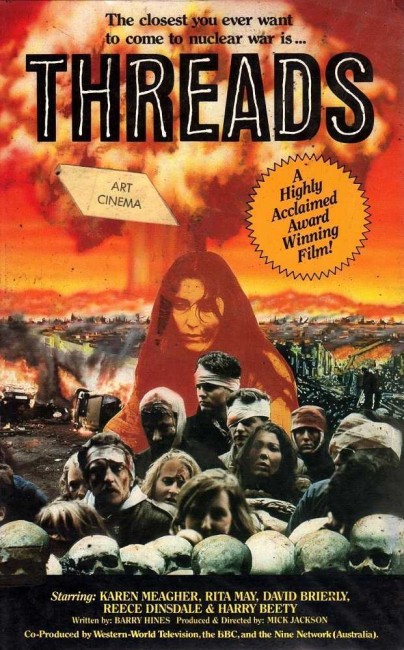 In Sheffield, Jimmy Kemp and Ruth Beckett find that she is pregnant and so announce the decision to get married. At the same time, there is tension growing between the USA and Soviet Union over an incident in Iran. Tensions build towards nuclear war. In Sheffield, an emergency manager is appointed to coordinate local government but organisation is chaotic. Nuclear warheads then strike just off the coast of England. Sheffield is struck and the city devastated. In the aftermath with buildings in rubble, the survivors emerge. There is a struggle to find scanty supplies, as all the while they are affected by radiation sickness. With death everywhere and authorities having little ability to coordinate, the situation is dire.

The Nuclear War Film has a history that goes back to the very first depiction with Five (1951). The genre was at a peak during the early 1960s with grimly serious works such as On the Beach (1959), Dr Strangelove or, How I Learned to Stop Worrying and Love the Bomb (1964), Fail-Safe (1964) and The War Game (1965), which all came out around the time that the real world teetered the closest it has come to full-out nuclear war with the Cuban Missile Crisis.

The 1980s brought a renewed interest in the nuclear war film with US-made efforts such as The Day After (1983), Testament (1983), WarGames (1983), the tv movie Special Bulletin (1983) and Miracle Mile (1988). From other countries, we had the French Malevil (1981), the Japanese anime Barefoot Gen (1983), the Canadian-made Countdown to Looking Glass (1984) and the Soviet-made Letters from a Dead Man (1986). Although these were the high-profile entries on the subject, they were far outstripped in devastating impact by the British efforts such as the made-for-television Threads and the animated theatrical film When the Wind Blows (1986), plus other works like Rules of Engagement (1989) and the darkly funny comedy tv series Whoops Apocalypse (1981).

Threads gives the impression that it was conceived as a 1980s equivalent of The War Game. The War Game was made by Peter Watkins in a documentary-like style that depicted what would happen in the event of a nuclear strike on London and the desperate unpreparedness of the authorities and general public. There is a very similar quasi-documentary approach used here whereby dramatised depictions of the nuclear attack on a British city are interspersed with the voice of a dry detached narrator citing Civil Defence statistics and figures about the likelihood of what would happen. A certain chill comes as the end credits reveal a sizeable list of scientists and experts that have contributed to ensure the authenticity of what is portrayed on screen.

The characters are depicted with a thorough kitchen sink ordinariness. The film opens with Reece Disndale and Karen Meagher who could not be a more average working class couple and their decision to get married after finding she is pregnant, followed by a quickly skipped-over series of scenes of them finding a place, him at work and so on. Woven into the background are news snippets from the escalating international political situation over a US-Soviet military incident in Iran and the sinking of a ship, followed by scenes showing the preparations for war by the department heads of local government.

Threads gets its disturbing effect out of the very ordinariness of the situation – the very banality of the public service announcements going out telling people to make sure to place labels on any dead bodies in the house and bury them as soon as it is safe to go out. The scenes of the family trying to build a home shelter remind of the much bleaker ones in When the Wind Blows, which was specifically about showing an elderly couple trying to interpret the inadequacy of Civil Defence instructions for home preparation.

When the nuclear strike comes, the film does nothing to flinch away from the full-on horror. We get scenes of bodies crisped and incinerated; of survivors retching as they throw up from radiation sickness; of soldiers shooting survivors as they try to protect what little supplies of food there are left; the city reduced to bombed-out rubble with mothers holding charred corpses of children in the ruins.

What the film fully conveys is how utterly horrific the situation would be, beyond the normal capacity of any individual (or even society) to cope. A scene where people start carving up the corpses of a sheep unconcerned whether it might be radioactive just to have something to eat or of Karen Meagher giving birth to her baby and having to bite through the umbilical cord with her own teeth is about as bleak as it gets. Even the scenes near the end with people trying to put things together and plant crops in a dreary winter field seem to offer little hope.

Threads came from British director Mick Jackson who had previously worked mostly in tv documentaries. Jackson went on to make various other works for British tv including the near future political mini-series A Very British Coup (1987). On the basis of Threads, Jackson was brought to the US where he made several mainstream films beginning with Chattahoochee (1989) and including the Kevin Costner-Whitney Houston hit The Bodyguard (1992). His two other genre vehicles were the whimsical Steve Martin comedy L.A. Story (1991) and the disaster movie Volcano (1997).