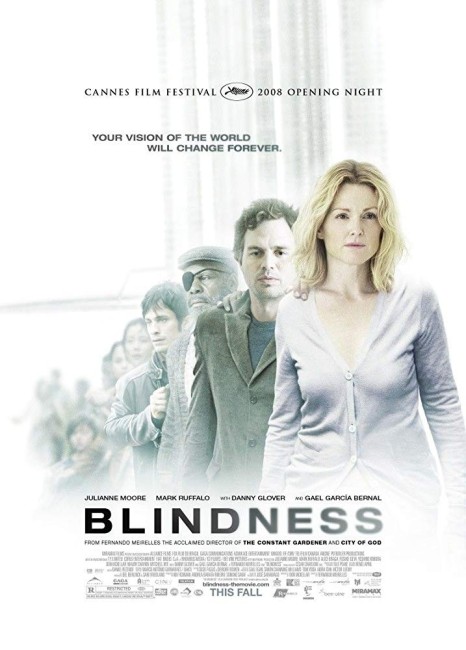 A Japanese man panics at the wheel of his car because he has gone blind and can now only see a white blur in front of him. Another man offers to drive him home but, after doing so, steals the Japanese man’s car. The Japanese man’s wife takes him to the ophthalmologist but the doctor is unable to find anything wrong. In the morning, the doctor wakes up blind too. As the infection rapidly spreads, the government acts swiftly, rounding up the infected. The doctor is placed inside a guarded detention facility. His wife, who can still see, insists on coming with him. The Japanese man and his wife, the thief, as well as a prostitute and a young boy who were at the doctor’s surgery are also placed there, all having been affected by the blindness. The facility is soon filled with others and the guards outside demonstrate they are prepared to shoot anyone who tries to leave. Inside, the group struggle with mess and sanitation that has run out of control, while the guards appear indifferent to providing medical care. Next, one man declares himself the king of Ward 3 and appropriates all the food supplies. Armed with a gun, he decides they will only hand out supplies to those who pay in valuables. When these run out, he next demands that the other wards offer up their women for his men.

Blindness was the fifth feature-length film from Brazilian director Fernando Meirelles. Fernando Meirelles came to fame with the international hit of his third film City of God (2002), a stylish and violent depiction of life in the favelas of Brazil. Blindness was his second English-language film after making the acclaimed The Constant Gardener (2005) and his one other genre credit is as a producer on the wittily clever meta-fiction Zoom (2015) and the time travel film Loop (2020). As the credits note, Blindness is “a very independent film” with funding having been raised in four countries among seventeen different production companies. The film is taken from a 1995 novel by Portuguese novelist Jose Saramago whose works were also adapted into Enemy (2013). The screenplay is written by Don McKellar, a Canadian actor – he plays the role of the thief who dies from an infected leg here – who has also written scripts for Highway 61 (1991), Thirty Two Short Films About Glenn Gould (1993) and The Red Violin (1998), and has directed the excellent end of the world film Last Night (1998), Childstar (2004) and The Grand Seduction (2013).

The differences might be that Blindness is more focused around the collapse of civilisation occurring inside a microcosm, whereas Wyndham’s book was largely concerned with examining different models of how best to put civilisation back together. Both works seem to approach the social apocalypse from opposing angles – Wyndham’s book was about the search for a place where basic middle-class decency could establish itself when other models of government fail, whereas Blindness is more about the collapse of social order in the face of the plague and how the liberal outlook and decency represented by Mark Ruffalo’s character is rendered useless in the face of cruel authoritarianism.

Blindness could be more like The Day of the Triffids by way of The Experiment (2001), the German film based on the Stanford Prison Experiment, dealing with the conditions that ensue when people are confined together. Not long after Blindness came out, there was also the equally remarkable Perfect Sense (2011) set in a world where the populace starts progressively losing each of their senses and other works in a similar vein such as the Spanish-made The Last Days (2013) about people dealing with a socially apocalpytic malady of agoraphobia; Embers (2015) and Little Fish (2020) where the entire population suffers from loss of their memories; A Quiet Place (2018) and The Silence (2019) where the world is forced to become silent after an invasion by creatures that kill anybody who makes a sound; Bird Box (2018) where people are killed if they look outdoors or remove their blindfolds; and Awake (2021) where the whole world can no longer sleep.

One of the stipulations that Jose Saramago gave when giving Fernando Meirelles the rights to the book was that the city it takes place in was not identifiable. Thus the film was shot in locations as diverse as Toronto and Sao Paulo with every actor in the principal cast seeming to come from a different ethnic background. As in Don McKellar’s Last Night, the menace of the show is stripped of outward theatrics and effects set-pieces and instead focuses on the characters and their approaches to coping with things – there is not even any explanation of what caused the plague of blindness. For that matter, none of the characters are even given names.

Meirelles directs with a cool quietude, observing incidental detail in the midst of dramatic scenes. He chooses an interesting method of demonstrating the blindness, frequently using point-of-view shots where the camera is out of focus or overcome with blurred washes of white light. There is a beautiful scene where the Japanese couple reunite where all we see is a point-of-view shot following the indistinct shape of an arm as it travels to connect up with another blurred shape in the whiteness.

The film’s most powerful sections begin once Meirelles and Don McKellar have the cast confined in the detention facility and we start to see the cohesion of social order collapsing. Meirelles creates compelling images – the slow dissolves as the facility is filled and we are shocked to suddenly see it overflowing with refuse and litter, or people simply walking past without clothes on. The film becomes especially charged with the introduction of Gael Garcia Bernal and his establishment of a tyrannical dictatorship over the rest of the wards, tightening his grip by confiscating the food and demanding the payment of valuables and then the women of the other wards. These scenes are drawn with a maximum amount of terse grimness as we see Mark Ruffalo’s protestations of fairness and good sense being ignored and people having to confront the moral repercussions of what they are required to do. The orgy scene where the women surrender is shot in an amazing montage of blurred and out-of-focus camerawork where Meirelles lets the incidental detail, the indistinct half-lit shapes of bodies and the accompanying sounds do all the work for him.

The film is equally remarkable once they emerge into the outside world, where the entire city is seemingly covered in litter and chaos. Here the film goes from a tight drama about confinement to a more standard post-holocaust story. There is a strong scene where Julianne Moore enters a supermarket where everything has been trashed and she finds an undisturbed cache of food, only to be mobbed as the blind smell what she is carrying. There are other beautifully evocative scenes – like the moment where aging Danny Glover and young Alice Braga admit attraction for one another and ask if they are alone, conclude from the silence that they are and the camera pulls back to show everyone sitting in the apartment watching them.

It is of some surprise that a number of other commentators reacted negatively to Blindness. The American Council for the Blind issued a harsh condemnation of the film for depicting blind people acting as brutish, murderous savages and the implication that blindness will bring out the worst in humanity. Roger Ebert bizarrely called the film “one of the most unpleasant, not to say unendurable, films I’ve ever seen.” Others have issued similar comments, mostly based on the depiction of the savagery of social conditions or querying why Julianne Moore failed to stand up to do more. I had a huge liking for Blindness. It is a quietly underrated science-fiction masterpiece, a model of modesty and understatement, and an all too rare focus on ideas rather than spectacle.

(Winner in this site’s Top 10 Films of 2008 list. Nominee for Best Director (Fernando Meirelles), Best Adapted Screenplay and Best Cinematography at this site’s Best of 2008 Awards).