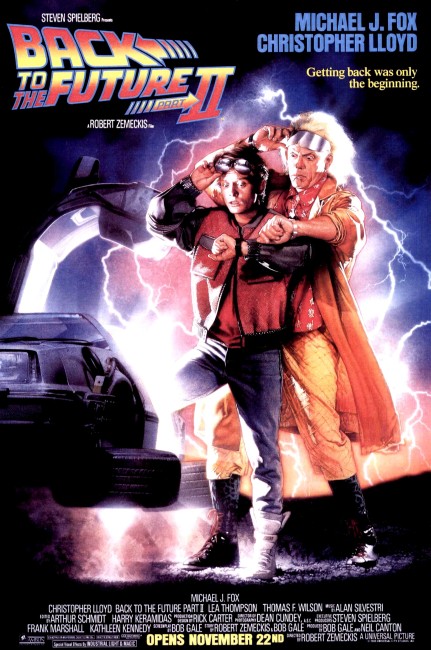 Marty McFly and Jennifer Parker accompany Doc Brown into the year 2015. There Doc gets Marty to pose as his son Marty Jr to stop him from being arrested. While they are there, the aging Biff Tannen discovers that the DeLorean is a time machine and uses it to return to 1955. There he gives his younger self an almanac that contains all sports scores between the years 1950 and 2000. When Doc and Marty return to 1985, they find it a shockingly changed world where Biff’s ability to ‘predict’ sports scores has made him the richest man in the country. To save the present, Doc and Marty must return to the date of Marty’s previous visit in 1955 and prevent Biff giving the almanac to his younger self. In doing so, they must also avoid encountering themselves during Marty’s original trip back in time.

Sequels don’t come more cleverly than this. Back to the Future (1985) was a highly entertaining light-hearted jaunt around the more familiar cliches of the literary time-travel genre. This time director Robert Zemeckis and screenwriter Bob Gale have read up on their time paradoxes and alternate realities and turned the plot into an ingenious comedy of snowballing temporal errors.

Back to the Future Part II has a dazzlingly intelligent and sophisticated script. (The only point of contention surely being that the changing of the future by Biff giving himself the almanac in 1955 would mean that the 2015 that he came from would no longer be there for him to return to with the car). Robert Zemeckis directs with the same freshness of energy that the first film had. There is a remarkable cleverness to the 1955 scenes, which essentially replay the events of the first film while telling another story inside the margins. This involves a meticulously choreographed game of split-screen opticals and reshooting of scenes from the original film to show Michael J. Fox ducking around and trying to avoid himself.

The film has a helter-skelter pace and makes several dazzling flips of scenario that leave the less able of mind behind. It also leaves little room for the light humour of the original. Indeed, during the middle sections – which depict a much darker version of the present-day – and the ending that appears to kill off a main character, it becomes a very dark variation on the original. If you run the two films along side-by-side, Back to the Future has an enormous energy and innocence but there is little of that in Back to the Future Part II, where the tone is sombre. Critics leapt in with kneejerk reactions slamming the film for its darker tone and hanging ending. Whereas one tends to think that the dexterity of scripting makes Back to the Future Part II the best film of the entire trilogy.

The future scenes make some nicely satirical jabs with a holographic Jaws 17 (directed by Max Spielberg – executive producer Steven Spielberg’s real-life son) and a café that features Max Headroom (1985, 1987-8)-styled simulations of Michael Jackson, Ronald Reagan and the Ayatollah. The Back to the Future series of films resonate with pop culture references and riffs – they represent a vision of the past and future having been innocently colonised and constantly rewritten by the baby boomer generation.

Robert Zemeckis’s other genre films are:– Who Framed Roger Rabbit? (1988), the immortality black comedy Death Becomes Her (1992), the alien contact film Contact (1997), the ghost story What Lies Beneath (2000), the computer-animated Christmas fantasy The Polar Express (2004), the computer-animated adaptations of Beowulf (2007) and A Christmas Carol (2009), the true-life based Welcome to Marwen (2018) where Steve Carell builds a fantasy village of dolls, the remake of The Witches (2020) and the live-action remake of Pinocchio (2022). Zemeckis has also produced a large number of other genre films including the Tales from the Crypt (1989-96) cable tv horror anthology series, the two film spinoffs Tales from the Crypt Presents Demon Knight (1995) and Tales from the Crypt Presents Bordello of Blood (1996), Peter Jackson’s The Frighteners (1996), the voodoo film Ritual (2002), the computer-animated Monster House (2006) and Mars Needs Moms (2011), Real Steel (2011), the tv series’ Manifest (2018-22) about a planeload of temporally displaced passengers and Project Blue Book (2019-20) about the US Air Force’s true life UFO investigation department and the robot film Finch (2021). Zemeckis was also a producing partner in Dark Castle Entertainment, which have made a number of horror films including House on Haunted Hill (1999), Thir13een Ghosts (2001), Ghost Ship (2002), Gothika (2003), House of Wax (2005) and The Reaping (2007).